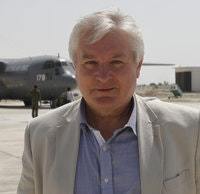 Mr. Reeves has spent two and half decades working as a journalist overseas, reporting from a wide range of places including the former Soviet Union, the Middle East, and Asia. He is a member of the NPR team that won the highly prestigious Alfred I. duPont–Columbia University and George Foster Peabody awards for coverage of the conflict in Iraq. Reeves has also been honored several times by the South Asian Journalists’ Association.