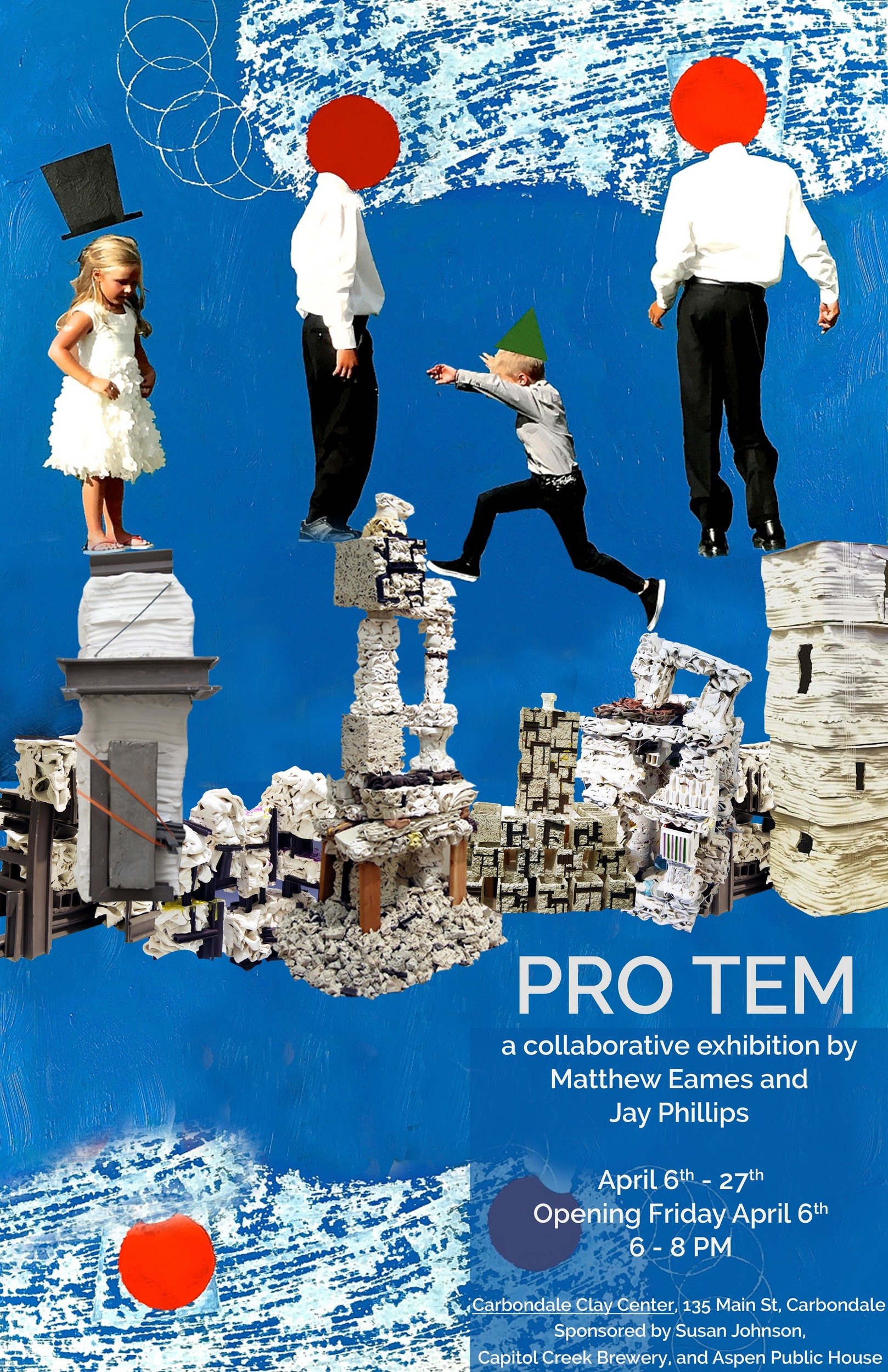 Two local artists, Matthew Eames and Jay Phillips will be displaying their dual exhibition in the gallery from April 6th – April 27th. Join us for the opening on April 6th, from 6 – 8 PM at the Carbondale Clay Center.

The exhibition is called Pro Tem, named aptly for the Latin phrase meaning “for the time being”. The exhibition is inspired by impermanence throughout time and is combined with the often-ephemeral nature of art. These artists will be using a variety of mediums to create works of art central to this theme.

Eames and Phillips have collaborated for shows in the past, however this show is a different approach to collaboration than the two have previously engaged with. Eames says “We have pieces that we worked on individually with the intent to combine them in a collaborative sense for the show. We want the focus to be on our work, and how that work can speak to each other within the concept of impermanence.”

Both Eames and Phillips have a multitude of solo and group shows under their belts and are no strangers to installation exhibits. Matthew Eames is a ceramic artist born on Cape Cod, Massachusetts, who received his BFA in Ceramics in 2007 from the University of Hartford. After graduating with his undergraduate degree, he took a residency position and then studio technician at the Worcester Center for Crafts. In hopes of continuing his path toward graduate school, he left the position in Worcester after two years to attend a post-baccalaureate program at the University of Arkansas. From there, he went on to earn his MFA in Ceramics from Wichita State University in 2013. During his years as an aspiring artist, he has had the privilege of exhibiting in many national shows, including a solo exhibition at the Ulrich Museum of Art in Wichita, Kansas, and most recently creating an installation during the leading ceramics symposium known as NCECA. After graduate school, he moved to the Roaring Fork Valley in Colorado to be a part of the Carbondale Clay Center where he currently holds the position of Studio and Gallery Manager.

Jay Phillips is a Painter and Poet living in Glenwood Springs, Colorado. Born in Amsterdam, NY, he studied at New Paltz University and moved to the Roaring Fork Valley in 1998. He has worked locally in painting, ceramics and gallery installation at CMC Aspen and Anderson Ranch Arts Center. He has shown work at the Aspen Chapel Gallery and the Red Brick Center for the Arts in Aspen, CO , CCAH and the Carbondale Clay Center in Carbondale, CO, and BWAC in Brooklyn, NY. Jay has also held a studio at Studio for Arts and Works in Carbondale, CO and maintains a studio at his home in Glenwood Springs, CO.