Locally as well as nationally, women make less than men 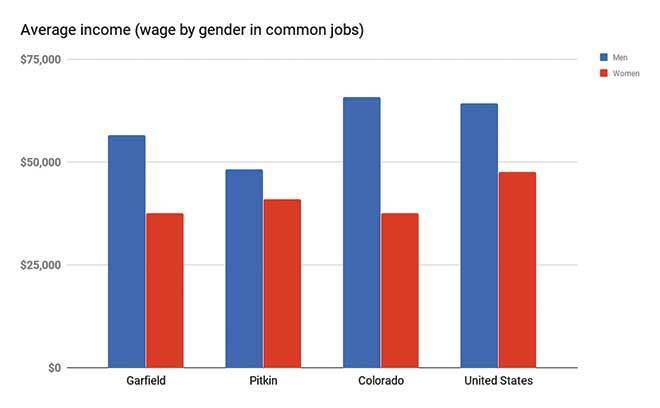 There are several reasons why one employee may receive higher compensation than another — education, experience and salary negotiations at the time of hiring, among others. But the numbers for Garfield County also reveal another discrepancy among incomes: gender.

Men who are employed full time in Garfield County earn, on average, more than 1.5 times than a woman working full time, according to Data USA, an online platform for public, government-published data. The average income of a man in the area is $55,599, whereas the average income of a female is only $37,594. And if you think that is just a reflection of men working in higher-earning occupations, think again.

A “miscellaneous manager,” for instance, can expect to earn anywhere between $75,000 and $111,000 —  if that person identifies as male. A woman in that same category typically earns between $38,000 and $63,137. The difference between the average incomes in that field for men and women in the county? A little more than $43,000 per year.

National trends indicate that the wage gap between genders actually increases in traditionally higher-earning roles compared to their lower-earning counterparts, and that is typically true locally as well. For instance, the average income for a male retail supervisor is $41,992; a female in a similar position will make an average of $35,816. That said, there are exceptions — there is a more-than $35,000 gap between the average male truck driver’s income ($49,911) and that of their female cohorts ($14,566).

While the National Labor Relations Act (NLRA) makes it clear that it is illegal for an employer to prohibit employees discussing their respective salaries — and Colorado state law explicitly mirrors that — it’s still culturally not typically discussed among colleagues. According to a survey by Cashlorette, a Bankrate company, only about 20 percent of American workers share their incomes with coworkers. Granted, that statistic increases with younger generations: while a mere 8 percent of baby boomers have shared their salaries with coworkers, a full 33 percent of millenials have.

That kind of sharing could lead to more transparency, as the Twitter hashtag #talkpay has already indicated, on which people post their job titles, compensation and negotiation stories. But for many locals, that conversation is a new one, if it’s happening at all.

Last November, Valerie Curry, a nurse in the area, recently participated in an industry survey regarding pay and cost of living in Garfield County. She received the results of that survey a month later.

“What really surprised me is that male nurses really make more money than female nurses. Wow,” she said, noting that she also learned that nurses in Garfield County make less than nurses in other areas of the state.

Tom Whittsit, a founding partner in Whitsitt & Gross P.C., has an extensive background in employment law and the Roaring Fork Valley. He hasn’t seen a case dealing specifically with a gender-based complaint in years.

“I do most of the employment-related case work in our firm; I have not had an equal pay case in quite some time,” he said. “That doesn’t mean it’s not around and it’s not a problem, it’s just the people are not bringing cases — at least not to me — recently.”

In general, regardless of gender or race, employees in Garfield County on average earn less than the state averages. In Colorado, the average salary of a man working full time is $65,897, while the average salary for a female is $49,195.

But the disparities between wages earned for men and women in Garfield County is sometimes decidedly greater than the statewide statistics. The “miscellaneous managers” mentioned earlier? At the state level, the difference between average male and female incomes in those roles is less than $25,000 — an almost 42-percent difference from the $43,000 gap in Garfield County in the same category.

Nationally, women make about 83 cents to their male counterparts’ dollar, according to the most recent data published by the Economic Policy Institute. And Asian and white women take home more money than black and hispanic women do, with the former two making 88 and 81 cents, respectively, and the latter earning 65 and 59 cents, respectively, to every dollar a man makes (similar data at the local level were not available).

There is reason for optimism. In Garfield County, for instance, wage distribution became slightly more even between 2014 and 2015 — by a little more than 1 percent. As noted, younger people are more likely to openly talk about their wages, and while some career advisers suggest that may not always be a good thing, it does increase transparency. Even the national figure that women earn 83 cents to a man’s dollar isn’t necessarily the result of outright sexism: a U.S. Department of Labor study in 2009 found that, when relevant factors were taken into account, the wage gap between men and women is actually closer to a six-cent difference. Some of those factors, of course, are cultural, such as a woman’s much higher likelihood to take extended time off from work to care for family, which will likely derail her lifetime earning potential.