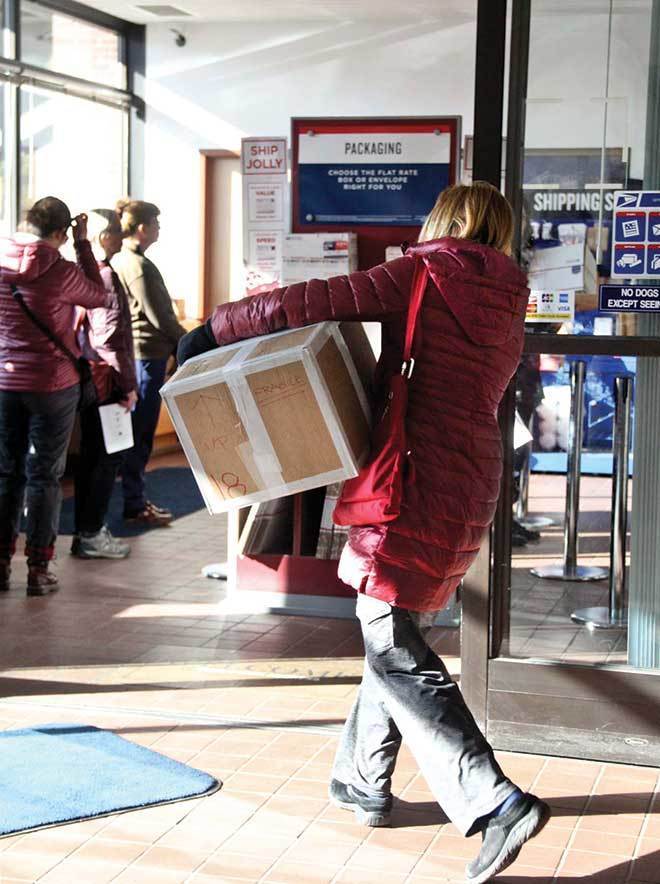 Neither snow nor rain nor heat nor gloom of night can stay the United States Postal Service, but a dearth of workers can certainly gum up the works a bit.

For the last few months, the Carbondale office has been struggling to get ahead after several employees left to pursue other opportunities and some of the remaining staff were affected by illness, injury and the like. Heading into the holidays down 20 percent of their staff and Sunday Amazon delivery suddenly added to their plate, they borrowed employees from other offices as far away as Delta, Montrose and Craig, worked long hours, and still found it an uphill battle.

At least one resident reported not receiving mail for four consecutive days, while others reported delivery late into the evening and even apparently on Sunday. It was a particular concern for businesses, though no one The Sun spoke to specifically recalled any late paychecks or delayed billing.

Carbondale Arts did encounter recurring problems with its bulk mailings which, according to CA Operations Manager Deborah Colley, only one employee at the post office is trained to process.

“It’s been a problem for several years. Before, we’ve figured it out and dealt with it. Now it’s just getting lost in the shuffle,” she said. “It’s one of the top ways of informing people about our gallery openings. We could tell people didn’t get them because the turnout was low.”

Despite her frustration, Colley was disinclined to assign blame.

“I sense the incredible stress the post office is under,” she said.

“It wasn’t efficient at all, but it wasn’t the carriers’ faults. We know they’re trying as hard as they can,” she said. “It’s a hard place to deliver to.”

Indeed, with 79 apartments spread across multiple addresses, it takes some experience to navigate the complex. The usual carrier had plenty, but while she was injured, her route could see a different fill in day to day.

“She has really spoiled us,” Nieslanik said. “One slip and fall and the whole post office kind of went down. I think they need to be more organized to keep that from happening.”

Luckily, The Sun hasn’t heard of any major mix-ups or delays in more sensitive sectors like medicine or municipal government. Several institutions contacted for the story recalled no problems at all, and Heritage Park even reported mail delivery earlier than usual.

Still, Postmaster Reza Tehrani would like to see things better across the board.

“When you borrow from Peter to pay Paul, now Peter’s customers are unhappy,” he said.

Tehrani has himself had plenty of 12 hour days delivering mail of late, and the clerks and behind the scenes workers have been asked to pitch in as well.

“All these people come together to make sure we got the mail out and kept things running,” Tehrani said. “I want to thank everyone who helped out. I just shows the dedication our employees have to their customers.”

The borrowing and the overtime isn’t sustainable, however.

“People have lives. They get tired,” he observed. “The only solution would be to get more people in here.”

In fact, it’s rare for the office to hit its staffing cap, so the hiring banner is almost always up.

“It’s tough to attract new employees because of the cost of living — not just in this office, but all over the Valley,” Tehrani noted.

For folks already here, however, the post office offers decent wages for an entry level position — from  $14.71 an hour for a mail handler up to $17.40 for a rural carrier  —  with just a high school diploma required in many cases and training provided. There are also an array of benefits that come with working for the government like health insurance and paid vacation, plus the chance to find your niche in one of the country’s largest employers.

“You can look at it as a job or as a career,” Tehrani said. “There are countless fields to pursue.”

He’s optimistic that the right handful of folks will be visiting usps.com/careers, applying online and getting up to speed in their new roles soon.