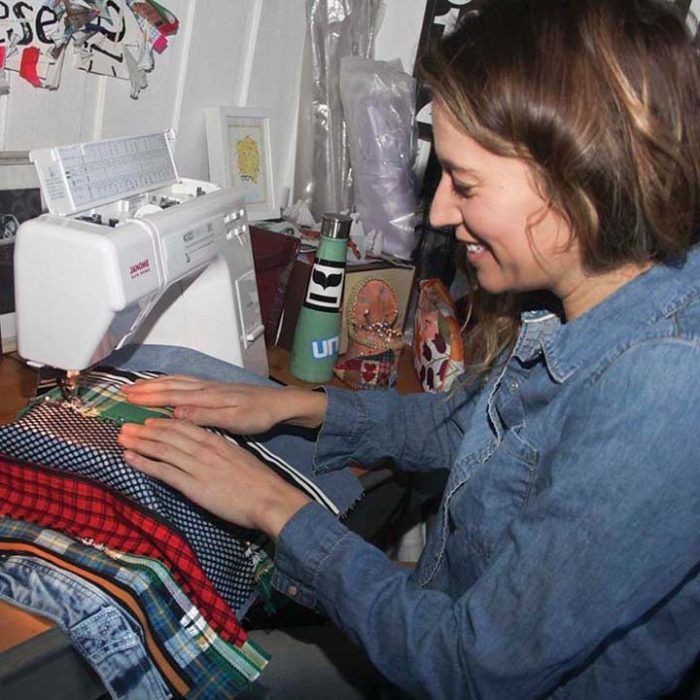 There are few more potent potions than the Green is the New Black Extravaganza, and Laura Stover contributes several essential ingredients. With this year’s theme of Super.Natural, it’s easy to imagine her gathered around a cauldron with Deborah Colley and Amy Kimberly, substituting textiles and tech for eye of newt and toe of frog.

“Anything art related I’m involved in. I just like putting my hands in all the different pots,” Stover said. “When I see the dancers and the projection and everything come together I get giddy like a little kid.”

Stover grew up in Eastern Pennsylvania and studied architecture and international relations at Carnegie Mellon University. By the end of her time there, however, it was her minor in communication design that really drove her — though her major continues to provide a backbone of planning and execution.

“If you don’t have a strong concept, you’re kind of flailing around,” she noted.

Right out of school, however, she was more inclined to take a year off and ski than plan. She worked on a kids’ book she still hasn’t published while living in Jackson Hole and traveling in New Zealand. It took her three years to bow to internal and external pressure and actually apply her training at a design job in San Francisco. The call of the mountains was too strong to resist, however, and her Glenwood Springs native boyfriend was more than willing to come back to the Valley.

While trying to make ends meet as a freelance graphic designer, Stover got involved with Green is the New Black in 2012, and things began to fall into place.

“After that, Amy approached me about working for Carbondale Arts, so that volunteer time really paid off,” she said.

The next year, she not only did a clothing line, but became more involved with the background and projections, learning from and eventually taking over from Hamilton Pevec. She learned Adobe Premiere on deadline, and began working with Alchemy Audio Visual to kick things up another notch with 3D projection mapping.

“We create optical illusions by making a mask of the stage screens and I put everything to scale exactly where it needs to be,” she explained.“You start making the the dancers and the screen interact, and it gives you the the ability to take people’s imagination somewhere. The technology can do pretty much anything you want. It’s just a matter of time and energy.”

The elements of style

Not content to do only one thing, Laura has also served as the designer liaison, bringing new folks in and finding ways to make everything fit together even as more people want to be involved. She has done the costuming, hair and makeup for the dancers and special characters who help tell the story that brings the whole thing together.

Her favorite part, though, is creating her own line.

“I love making clothes and being creative that way,” she said. “It’s what I do that makes me feel most like an artist.”

She has been thinking about this year’s line since the end of last year’s event, and begun cutting up and shredding denim and plaid last fall. It all gets reassembled with a “witchy back to school” vibe balanced by simple elegance.

“I like to combine one really wild element with one more simple element,” she said. “I don’t like to create clothes that are just for wearing. I want them to look like a beautiful collection together. This is the biggest risk I’ve taken so far and I’m excited about it.”

She thinks the line will compliment the sparkle and moon tones the theme has inspired. Most of this year’s event, incidentally, is set during the totality of an eclipse.

“We’re living the show in the land of the stars,” she said.

And while her designs as a whole may not be suitable for day-to-day wear, that won’t stop her from rocking bits and pieces.

“You want to make people feel beautiful,” she said. “If I buy something at the store and get compliments, I don’t really care, but if I made it myself it makes me really happy.”

Incidentally, she also models her clothes and others in the event, yet another level of involvement she explains away because she has to go to most of the rehearsals anyway. This is all on top of her three-day-a-week design and marketing job at Carbondale Arts. Her friends know they won’t see her for a month or so in advance, and she’s even missed a few powder days in recent weeks. On opening night, though, it’ll all be worth it.

“It’s so gratifying when the show happens and it all comes together,” she said. “It’s unlike anything people expect when they think of a fashion show. We’re taking you on a ride.”

Green is the New Black is sold out for March 9 and 10, but as of press time you could still get tickets to the March 8 preview at carbondalearts.com.