Learn to love monsters with ‘The Voices Project’ 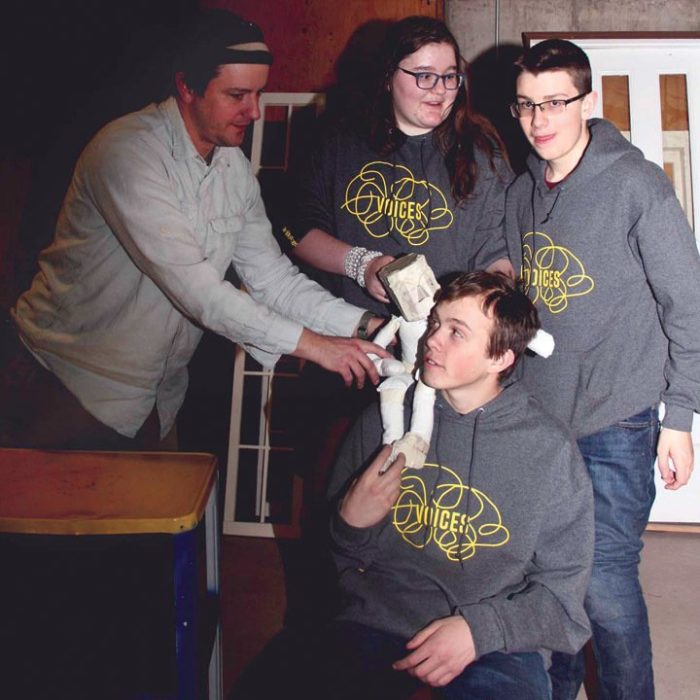 “Blame is a monster I can’t seem to kill off,” sophomore Daniela Rivera observes in a deeply personal vignette she will perform as part of “The Voices Project” — an interdisciplinary, multi-school performance which takes place March 16 and 17 at Thunder River Theatre.

The piece was originally a poem which garnered acclaim at a recent slam. It dealt bleakley and directly with childhood sex assault, but gave no indication of the central character coming out the other side.

“I came to a lot of realizations I didn’t want to really come to,” she observed.

When a group of Roaring Fork High School students were tasked with selecting a theme and came up with  “Loving Monsters” it gave her a chance to revisit the piece.

“It’s a title that can work in so many different ways,” she said. “There’s lots of external monsters that create lots of internal monsters you have to learn to deal with.”

In addition to gaining a cast of her peers, the story now has a sort of ending, with the monsters ripped up and thrown off a bridge. Most importantly, it’s another opportunity to tackle an important issue.

“People need to be more comfortable talking about things like this,” she said. “It’s easier to do that when you know everybody else is putting out something close to home.”

That doesn’t mean that every student involved has a dark place to draw from.

“I don’t really have many monsters,” said sophomore Hayden Holbrook.

Instead, he got into the program as a way to get out of his comfort zone of sketching and try a different art form.

“I’m down for expanding yourself in a creative way,” he said.

Holbrook co-wrote a duet with his girlfriend which explores the correspondence of an imprisoned father and his daughter. And while you could see a metaphor about high school as a four-year sentence, that’s not the point.

“I’m just trying to put some of my experience into this character,” he said.

The experience may refine his already “casually bleak” style and has already hooked him on performance.

“This has really helped teach us how to interact with each other,” he said.

The elements will be linked together by dance, with grown-up Gabriela Alvarez helping shape the students’ vision.

“Kids are super emotional. I’m just trying to give them this reality in their bodies,” she said.

It brings a sort of third language to the already bilingual performance — something near and dear to Alvarez.

“It’s not so common to see Latino people in the arts here,” she said. “If I was younger or my family was here and couldn’t speak English, I’d like to perform something they’d understand.”

Alvarez is also one of the few people to overlap between both Roaring Fork and Basalt’s pieces, which will be performed back to back.

“We’ve been through a very similar process, but what we’re creating is very different,” said Cassidy Willey, director for the Roaring Fork crew and drama teacher at Glenwood Springs Middle School.

“I’ve been incredibly touched by what the students have shared and inspired by what they had to say,” she said. “It’s very exhilarating because it’s authentic. I don’t think there’s any way an audience can show up and not feel that.”

What: “The Voices Project”

Who: Roaring Fork and

How much: $10 donation requested