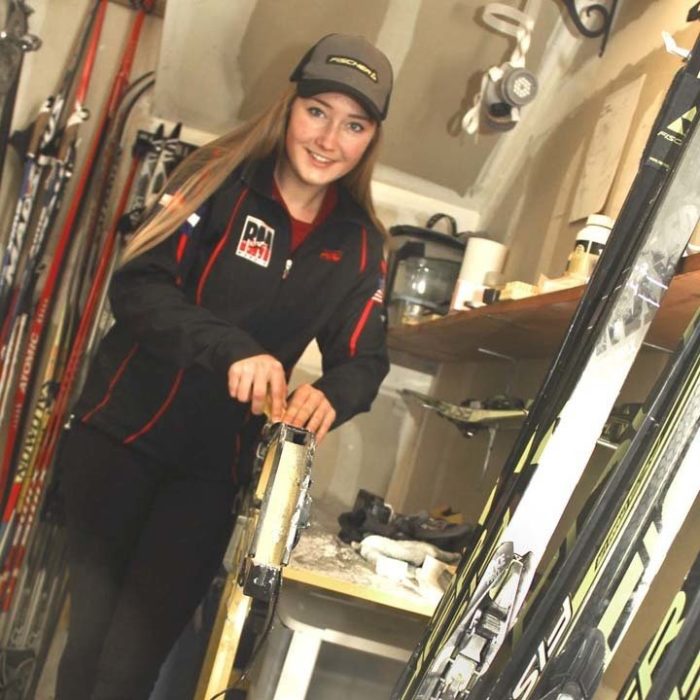 Spring has arrived and ski season is just about over in the Roaring Fork Valley. Temperatures are on the rise and snow levels (what little there was this year) are on the wane.  Ski enthusiasts are packing up and putting their skis in storage until next winter.

Born and raised in Carbondale on healthy burritos and Café Ole (her parents own Dos Gringos,) her ski season continues almost year-round — six days a week, sometimes twice a day for 11 months. But it has paid off.

The CRMS student is a Nordic ski racer whose goal this year was to make the U16 division of Aspen Valley Ski Club’s (AVSC) National Competition team. This team competes nationally and is the highest-level program for cross-country skiing at AVSC. Not only did Kate make the team this last season, she excelled and ended up as a state champion with all state finishes (top 5 overall) in both skate and classic. She also achieved all-American (top 10) finishes in both skate and classic at Nationals.

This is no easy feat for any teenager.

Because of the year-round training schedule, the sport requires dedication and resilience. Especially if you’re a high school student that who forward each year to summer. If you want to compete there is no summer vacation.

“Seventy-five percent of Nordic skiers are made in the summer,” Kate said.

Kate’s Nordic ski coach is August Teague, who is the director of the AVSC and is quite the catch as far as ski coaches go.  The Aspen native coached the Australian National Nordic team at the Olympics in Sochi, as well as two world championships.

Teague is the one who taught Kate about the importance of training and she attributes much of her success to him. “Because the season is so short, the training done in summer and fall is so important. This is a year-round sport, six days a week 50 weeks a year and two weeks for unstructured training,” Teague said. Most of her training is computerized, according to Teague. “Every time the athlete trains, they wear a heart monitor that tracks their speed, distance and heart rate, and they wear a wristband that evaluates how hard the athlete is working.  The biggest struggle is going easy on the easy days,” Teague said.

“Kate’s greatest asset is her mental strength.  She’s good at being able to push when it hurts, and part of that is to stay relaxed and believe in the process while competing in major events. What this basically means is that she believes in herself and in her training,” he said.

Kate achieved her goals the last two years but this year it will be different, Teague said.  “Her goal this year will be process-driven rather than result-driven. Kate is on the verge of making the U.S. Ski Team for an international trip, and if she takes a year to work on process, she will make it.”

Her dedication goes beyond just racing. Kate and the five other AVSC high school ski racers have gotten together to raise money to donate to Project Ski More which was founded by ski racer Colt Whitley two years ago.

According to their website, “Project Ski More is a crew of high school ski racers from Aspen Valley Ski Club who love snow and want to make sure kids of the future can ski too. Each of these promising young athletes has witnessed winter shrinking in their short lifetimes. Now their goal is to ski as far as they can in a single season, raising funds to protect our winters.”

If you’re curious about what Kate does on her few precious days off, we won’t keep you in suspense: she races bikes and kayaks.