Carbondale residency is dance troupe’s first all together in U.S. 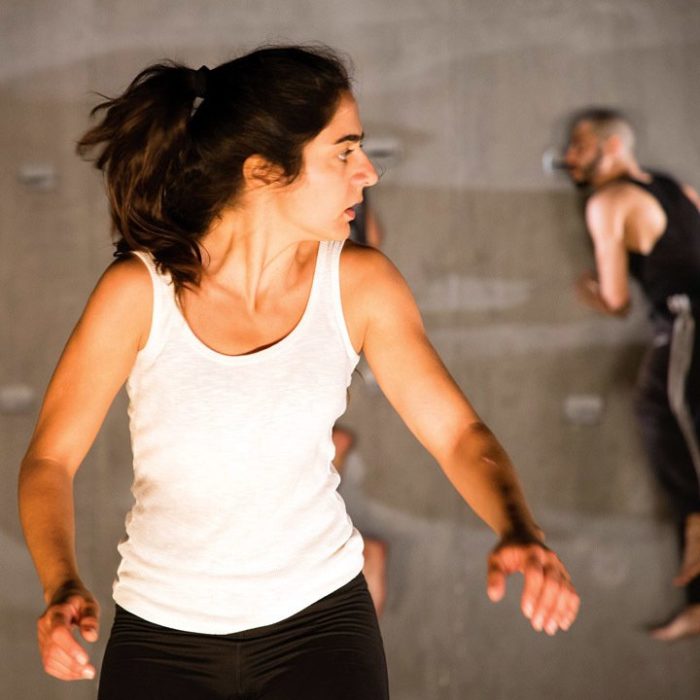 For a time, it seemed rehearsing via Skype was the best way to work with the entirety of the company — after all, the Yaa Samar! Dance Theatre (YSDT) is a transnational troupe, with Artistic Director Samar Haddad King in Palestine and Associate Artistic Director Zoe Rabinowitz in New York.

“We trudged along like that for a couple years, but it’s a really inefficient way to make dance,” Rabinowitz said. “It’s a physical, visceral art form, so to not be in the same room is obviously a huge barrier.”

But from 2011 to 2014, they made it work anyway. King was certainly no stranger to long-distance relationships, and she wasn’t going to let geography stand in the way of her and Rabinowitz’s company, which the pair cofounded after graduating together from the Ailey/Fordham fine arts program in 2005.

“We wrote a grant for a space residency and performance opportunity in the year following graduation and received that,” Rabinowitz said. “We thought, ‘Great, this is going to be so easy,’ and had no idea the road that led ahead.”

American-born to a Palestinian mother, King met her now husband during a trip to Palestine. “He was allowed in the country on a tourist visa, and they had a long-distance relationship,” Rabinowitz said of the couple. When they got engaged, they applied for a fiance visa, she said, but it was denied in 2010 — so King relocated. “She went there thinking, ‘Six months, we’ll sort this out,'” Rabinowitz continued. “‘There’s no reason he shouldn’t be granted a visa.’ They got married and applied for a spouse visa, and that case is still pending to this day. He had a multi-year re-entry tourist visa that could have lasted five years, but they wanted to do it the right way. That was denied.”

So, in 2011, YSDT went from being one of a myriad of New York dance companies to being the only one of its kind. In 2014, the troupe shifted from remotely rehearsing to committing to in-person residencies, which, while eliminating some obstacles, introduced others — namely, travel visas.

“Not everyone can travel everywhere, even within Israel and Palestine. Because of all the visa issues, it’s been easier for New York-based artists to travel to meet our Arab collaborators where it works for them,” Rabinowitz said.

As of this April, however, that’s no longer the case — thanks in large part to Dance Initiative, which is hosting YSDT in its first-ever American residency.

Putting Carbondale on the map

“It’s not just like we’re giving them studio space; it really is welcoming them into the community,” Dance Initiative Executive Director Peter Gilbert said. And the YSDT residency marks several milestones for the organization: not only is it Dance Initiative’s tenth residency, it’s the largest one in terms of the number of people being hosted.

“People will get to see how amazing this effort is, this collaboration of American and Palestinian dancers who struggle to have the opportunity to work,” Gilbert said. “It’s not just the lack of funds — most artists don’t have the money to do what they want to do. Thirty to 40 percent of their programs are cancelled because of conflicts, so it’s pretty special.”

It’s tough to tell who is more excited: Gilbert or Rabinowitz.

“Peter’s enthusiasm and generosity has just been incredible. His dedication to bringing artists from abroad and to welcoming our Palestinian artists has been so phenomenal,” Rabinowitz said.

The Carbondale residency, which will be the first in a three-leg tour that culminates in Paris, is more than a year in the making. After initially meeting in New York and beginning a conversation, Gilbert found himself navigating immigration paperwork and airfare costs.

“We had to get visas for three of them, so we had to write letters of invitation,” Gilbert said. “They had an attorney look at it and came back with suggestions for the final draft. Not only are they not allowed to get paid — it really is a visitor visa — they can’t perform at a paid event.” Typically, Dance Initiative charges $15 for audiences to see a visiting company’s work in progress to offset the costs of bringing that company. Now, for the organization’s most expensive residency to date, that is not an option.

“Donations are OK and encouraged,” he added about the April 13 Launchpad performance.

YSDT, a multimedia dance company that utilizes film and theater in addition to dance, will also be presenting a film and giving a talk at 7 p.m. April 10 at the Colorado Mountain College Spring Valley campus.

“For each group, in some way, there’s been some community outreach,” Gilbert said of past residencies. “With this group, we’ve gone a little further. This is, in a way, more serious. It’s the sociopolitical issues. So we get to hear from them, which is a nice way for us to collaborate with CMC.”

While in town, YSDT will begin work on their newest piece, “The Keeper.” The work will explore a human’s innate sense of belonging to a place — along with the existential and political quandaries that can arise with that connection.

For many in YSDT, it’s not an esoteric concept. King’s husband, for example, is of Syrian descent but born in Golan Heights, which Israel annexed in 1981.

“Everyone there is sort of in this gray zone of having no nationality,” Rabinowitz said.

It’s been a mission of YSDT to give artistic voice to underrepresented populations, and so the company does not shy away from contentious issues in its expressions. For that, dance is a perfect medium, Rabinowitz said.

“As dancers, we’re these bodies on stage. We’re humans. Before you know anyone’s name or know where they’re from, you see their bodies and their interactions on stage,” she said. “That’s such a great opportunity for us, especially with the cultural mx we have, to challenge people’s stereotypes about what it means to be Arab and what it means to work transnationally.”

Carbondale audiences will get the first sneak peek at how the work takes shape. After leaving Carbondale, YSDT will go through a four-day residency at the Baryshnikov Arts Center in New York before its most intensive, six-week residency in Paris.

Gilbert is just thrilled that Carbondale is included in that list. “I never ask them to detail what they’re going to work on. That is less important to me than just having them here as part of our community for the week,” he said.