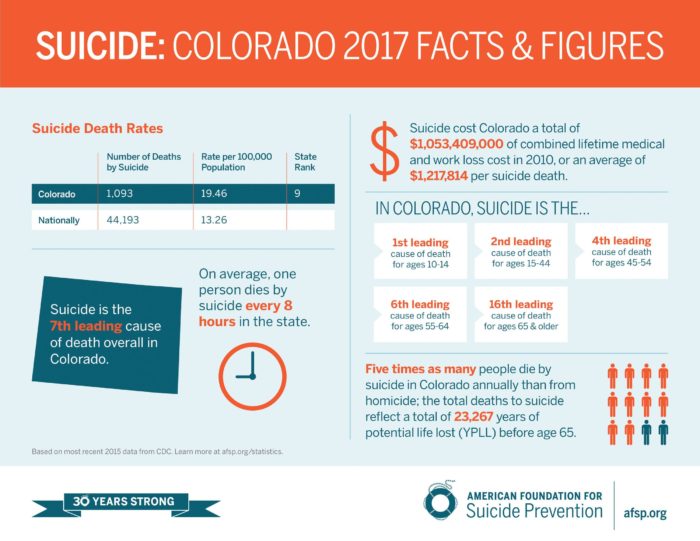 Temple Glassier is still a self-proclaimed mess. It’s been less than six months since her son, 15-year-old Basalt High School freshman Patrick Palardy, killed himself. But she’s doing everything she can to ensure his name will live on, and that comes from not shying away from the circumstances around his death.

“The thing that stands out the most to me is all the parents that would come up to me and say, ‘thank you for talking about it.’ Everyone’s first impulse is to say my son died, not to say that my son committed suicide, which was huge,” Glassier said.

In the aftermath of the tragedy, she learned much about the role suicide played in her son’s everyday conversations. “It is amazing to me, from going through Patrick’s phone, how many [peers] talk about it,” she said.

It’s a reality that those who work with teenagers regularly find all too familiar.

“I think that our kids joke about it, and that is in the zeitgeist now. If you look at their memes, their humor is dark,” Roaring Fork High School Vice President Kelsie Goodman said. “And we know that some of that is just how they talk, but we also want to make sure that we’re taking everything extremely seriously. It’s such a pervasive thing.”

Suicide is the leading cause of death for young people aged 10 to 24 in Colorado, according to the 2016-17 Colorado Office of Suicide Prevention Annual Report. And it’s hard to diagnose; not every student shows at-risk symptoms. Palardy didn’t, Glassier said. Or at least not obviously.

“He reached out to another friend of his and she told her mother. If her mother had been educated in some way, shape or form, she could have reached out to me. I want parents to be aware. So what if you make your kid mad or you’re wrong? But what if you’re right? Save one kid — what’s that worth? I know what it’s worth to me,” she said through tears.

The need for education to empower people to broach the subject is one of the reasons Glassier is working with Stepping Stones, a Carbondale-based nonprofit that creates safe spaces and youth mentoring programs for middle-school and high-school students. Glassier intends to create a new space in the El Jebel area, to be called Patrick’s Place.

“Our main vision is for teenagers to have a place to go, have a community, hang out and not spend a bunch of money,” Glassier said.“They will also have a ton of resources at their fingers. We hope to grow it and make it big — we’ve talked about animals and gardens and just therapy. It’s a pretty huge. We keep trying to put our arms around it.”

In that regard, she leans on the stewardship of Stepping Stone’s leadership team. The organization’s executive director, Kyle Crawley, has helped provide some of that guidance. “She wanted to take some action and get the community mobilized. A lot of her ideas are in alignment with what we’re doing,” Crawley said.

When you walk into Stepping Stones’ Carbondale location at 1010 Garfield Ave., it feels like you’re walking into a childhood friend’s house: the furniture is comfortable, the kitchen is welcoming and the videogames dominate a prominent corner. That’s intentional, Crawley said.

“We’re a centralized hub within a wheel. Kids identify with the space and they can be very vulnerable within the space,” he said as he toured through the music-dedicated basement and art room upstairs. “Then there’s all these other spokes within the wheel: counseling, school-district education, family, other community services, medical… it’s infinite, all the things they can be connected with,” he said.

By giving kids “voice to choice,” the students that utilize the Stepping Stones space and services gain a sense of agency in their lives when they otherwise may feel out of control, Crawley said. “They have a lot of input on what goes on here in the space. They’re choosing the activities. We even go so far as to let them manage some of the budget.”

That is exactly the idea for Patrick’s Place. “We want this in place by September,” Glassier said, noting that the team has already acquired land and is seeking funding to build. “It’s agressive, really aggressive,” she admitted unapologetically. “It’s been [four] months now since I lost my son. I’d like to see something in place while the community still hears and feels it.”

A place of compassion

Glassier and Crawley aren’t the only ones fighting to remove the stigma surrounding reaching out for help and talking about mental health. The Aspen Hope Center collaborates with RFHS and Carbondale Community School to ensure students have access to in-school experts. Soon, Basalt High School will also be among the schools to partner with the Hope Center.

“I cannot speak highly enough about the Aspen Hope Center,” Goodman said. “Patrick’s death was hard on our students… Our students are very attenuated about this, so we really want to be on the forefront of talking about this so they are equipped with the tools and the compassion to make the right choices.”

The community has found creative ways to encourage that compassion, Goodman said. On Valentine’s Day, Susan’s Flowers & Artisan Boutique donated yellow carnations — yellow is the official color of suicide prevention campaigns — for every RFHS student to receive one.

“With the school shooting that exact same day, our students were handing out flowers in the halls,” Goodman said, noting the school shooting at Stoneman Douglas High School in Florida that left 17 people dead. “Every student was walking around with these beautiful yellow carnations because they wanted to make sure every single kid felt loved.”

While there is no conclusive evidence linking a student feeling like an outcast with a propensity for gun violence — in a one-year study following more than 10,000 participants, only 4 percent of cases indicated that mental illness was the sole reason for a violent incident against others — feeling seen and appreciated certainly helps curb suicide ideation. According to the most recent Colorado Office of Suicide Prevention Annual Report, students who feel safe at school are 3.2 time less likely to attempt suicide, and those who are involved in extracurricular activities are 1.7 times less likely to do so.

“Being compassionate and kind even in confrontation, which we need to do with teenagers,” is critical to prevention efforts, said Andrea Pazdera, the licensed marriage and family therapist at RFHS through the Aspen Hope Center. “I have a painting in my office that says, ‘Love me when I least deserve it, because that’s when I really need it.’”

If you or someone close to you feels in a state of emergency regarding self harm, don’t hesitate to seek immediate help. There are several 24-hour crisis lines available via both telephone and text messaging. Additionally, local police departments can come to a home to perform a welfare check.

“Not a lot of people use that, I think because they’re afraid or they don’t think it’s that bad,” said Gretchen Stock-Bell, a Carbondale police officer.  “If someone’s in doubt, call 911. We won’t judge; we won’t discredit their concerns; if anything, [we’ll be there to] just give them the support that they need.”

(For any mental health, substance use or emotional crisis)

If you have lost someone close to you to suicide, there are organizations dedicated to providing tailored support and community. The Tragedy Assistance Program for Survivors (TAPS) is one such organization. Learn more at www.taps.org.