When the well runs dry 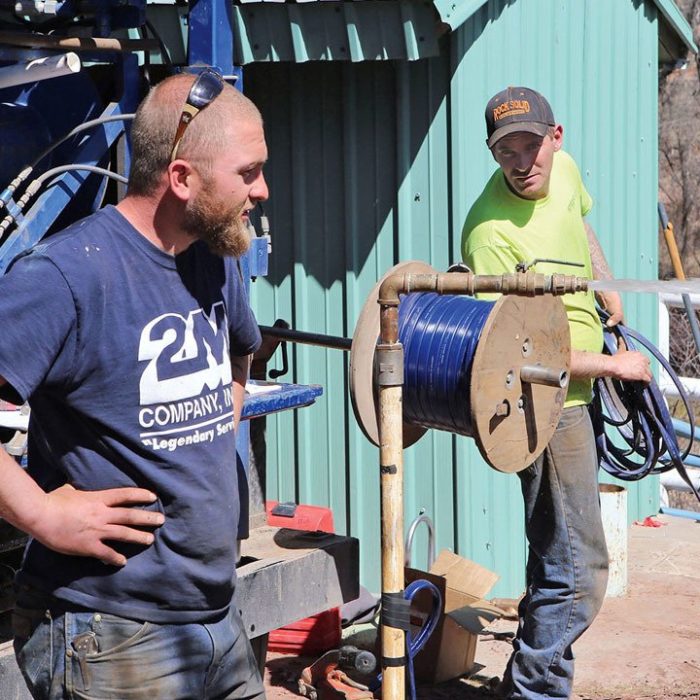 Last week, Sue Rollyson and her neighbors on Red Dog Road up the Crystal woke up without water. The subdivision’s well, which had operated consistently since the 1970s, had run dry.

“When you are trying to live your normal modern life with no running water, you realize how reliant you are on it and what a glorious thing it is,” she said. “It was much harder than you would imagine. We had to fill and haul jugs of water weighing 40 to 60 pounds up to the house in order to cook, wash hands, brush teeth, do dishes and — worst of all — flush toilets. We had to go to town to take showers. Almost every part of your life takes extra time.”

Indeed, many of her neighbors opted to just stay elsewhere for the time it took to dig a new well and hook it up to the system. It was a fairly quick turnaround, all things considered, with the outage taking priority over new well projects. And it’s not the first time Samuelson Pump Company has dealt with such a problem.

“It varies depending on the year, but we see it occasionally,” said Owner Ron Samuelson.

Usually newer wells are the unpredictable ones, but other factors can have a massive influence.

“We’ve seen wells up on Missouri Heights that were doing 100 gallons a minute when the irrigation was on that drop clear down to four in the winter,” Samuelson noted. “Our area geologically is such a hodgepodge that we have lots of different scenarios. We can have wells that go dry on a relatively good precipitation year, just because one area had less than normal.”

Indeed, the Crystal River Valley has had a particularly rough season for snowpack, and while the Red Dog well is the first in the area to run dry this year, it may not be the last.

“It potentially has the makings of a bad year for wells,” Samuelson said.

That doesn’t mean panic — many modern wells are deeper and won’t go dry unless the river does, if then. That’s the case for Carbondale’s own wells on the Crystal and Roaring Fork, which supplement supplies from Nettle Creek. The Town is working hard to make sure all three facilities are up and running for the summer to minimize the potential for shortages or rationing.

“We feel like we have enough water rights that we’ll be able to meet supply even through the drought,” Public Works Director Kevin Schorzman said. “The ditch system is probably going to be more of a fluid situation because it depends on more senior water rights downstream.”

As for the surface water season, it’s a bit harder to say.

The Roaring Fork Conservancy’s weekly snowpack report has the watershed as a whole at 75 percent of normal — better than the southwestern part of the state but not as robust as parts of northern Colorado and the Front Range. According to Education & Outreach Coordinator Liza Mitchell, area snowpack usually peaks around April 1, but that’s just a milestone, not a point of no return.

“We’re going to have above average years and we’re going to have below average years,” she said. “While there’s definitely concern, there is sort of a silver lining in that we’re coming off of two years that were well above average… Our reservoirs are like savings accounts for a not-so-rainy summer. When it becomes really bad is when we have back-to-back years like this.”

The Conservancy and local partners have also put effort into programs that will help residents, ranchers and wildlife weather tough years. The Crystal River Management Plan, for instance, makes it possible for irrigators to reduce their usage without losing their water rights.

“The only certainty is that things will become more unpredictable, so we’re trying to set ourselves and the river up for success — be proactive instead of reactive,” Mitchell said. “Each and every one of us is a water user and therefore water diverter.”

She encouraged individuals to be aware of their water usage, and also of pollutants that might end up more concentrated with less water. Overall, she’s been impressed with how much people in the Roaring Fork Valley pay attention to their water supplies — not just the rafting and ski companies. That said, there’s a fine line between worrying and panicking.

“An aware, engaged, informed citizenry makes for a better one, but having a red flag and running around screaming isn’t going to change anything,” she said.