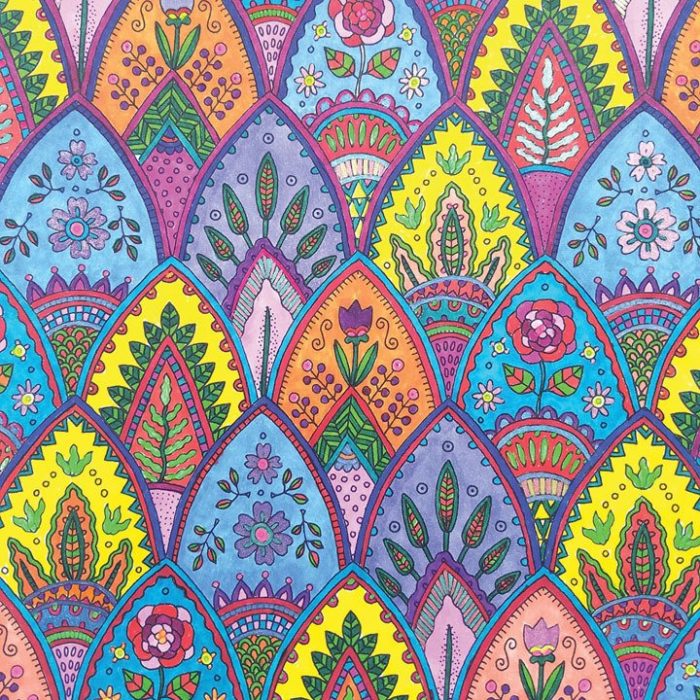 First Fridays are not typically part of Bob Fadely’s social calendar. At 88 years old, he mostly stays at home coloring. But thanks to his favorite hobby and family, April marks his first-ever art exhibit. He’s pleased as punch about it.

“This is really going to be special for me. The more I think about it, the more I’m looking forward to it,” Fadely said.

Fadely’s work will also mark the first exhibit at HANDMAKERY (449 Main St.). Ami Maes, founder and creative director of the children’s studio and art enrichment program, is happy to be one of Fadely’s 10 grandchildren.

“This is kind of embarrassing to me because I wasn’t expecting it all,” Fadely said of publicly showcasing his work. “I was coloring at the time she came in, and she says, ‘You know, we ought to have an art show. Your stuff is beautiful.’ And I said, ‘Well, whatever you think.’ There’s no changing her mind — she’s just like her mother and her grandmother,” he said with a chuckle.

Friday’s exhibit will feature 30 of his pieces, which is only a sliver of the more-than 400 that he’s done. While he doesn’t have a favorite, his wife does, he said. “It’ll be in the collection, but I don’t even remember which one it is, but she will!”

They’ve been married for 65 years. “She’s my best critic,” he said, adding that her influence permeates his work. “I pretty much go with what she says.”

Fadely colors every day, he said, sometimes just for an hour, sometimes for more than three. He retired in 2012 from a winding career — which included almost 20 years in Mid-Continent Resources’ coal mines between about 40 years working as a house painter from Aspen to Rifle, then another 10 years at George T. Sanders Company in El Jebel. It wasn’t long before he found himself getting restless.

“I thought to myself, ‘Well, I can still do a few things,’” he said, deciding not to let the arthritis that eventually led him to quit painting houses keep him from being productive in retirement. His daughter bought him a coloring book, colored pencils and gel pens. “I started it, and I just fell in love with it,” he continued. “[I have] halfway decent eyesight and I’m not too shaky yet, so adult coloring has been my thing.”

He’s not alone. In just the United States, more than 12 million copies of adult coloring books sold in 2015 — up from 1 million in 2014, according to Nielsen BookScan. Similarly, American colored pencil sales topped $128 million in FY 2015.

Despite the market for colored pencils, Fadely doesn’t limit himself with just one set of tools. “They have the pencils and they also have the gel pens, and I kind of lean towards the gel pens because the colors are so vivid,” Fadely said of his personal style. “A lot of times I’ll combine pencils and gel pens on one page.”

With the market exploding for adult coloring — and the opportunity to support her grandfather — it makes sense that Maes encouraged the exhibit. “It’s his greatest passion and hobby at his age,” she said in an email. “He spends several hours a day coloring very intricate designs which take him several weeks to complete.” She brought over frames to help him select which pieces to feature in preparing for the event.

“My grandfather is a very wonderful man with incredible stories,” she said. “He and my grandmother have lived in downtown Carbondale since the 60s. I’m very lucky to still have both my grandparents in my life.”

Maes, for her part, is no stranger in the local art scene. She began her career as an art teacher at Carbondale Middle School after finishing her degree in K-12 visual arts education.

She’s also instructed at the Carbondale Clay Center, the Art Base in Basalt, Aspen Art Museum and currently teaches at Anderson Ranch in Snowmass, in addition to running HANDMAKERY.

“She’s a whirlwind; I can’t keep up with her,” Fadely said of his granddaughter fondly.