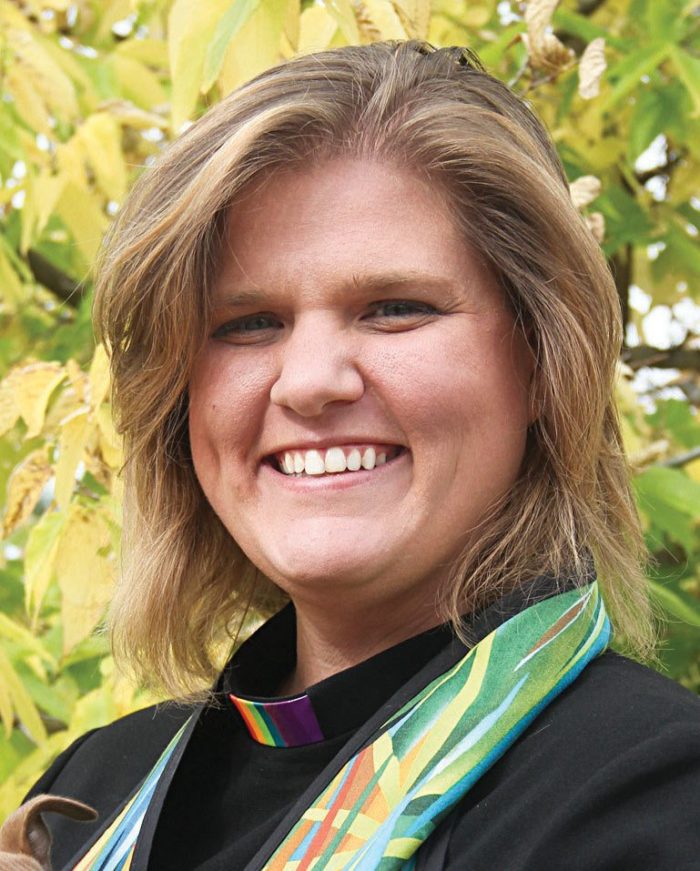 Reverend Shawna Foster had prepared an impassioned sermon for the Two Rivers Unitarians on Sunday in case she couldn’t be there to deliver it in person. She knew she would likely be arrested at the Poor People’s Campaign launch on Monday, May 14 in Washington, D.C. It wouldn’t be her first time in handcuffs because of civil disobedience, and she wanted to be prepared.

As it turns out, she was arrested Monday — along with hundreds of other protesters — but there were no cuffs involved this time. Foster described it as one of the most polite arrests she’s been through.

“At one point, the police came out and handed out Lacroix,” she said, explaining that because of the number of people being processed, police confined people in a nearby park.

“They brought us over to these cattle-pen kind of things. They put a group of 12 into a pen, and there were like 10 of these pens and an officer in front of each pen with our IDs. At one point, someone had heart palpitations, and there were like five doctors out in five minutes. There wasn’t this huge confrontation,” she said.

It was a stark contrast from her earlier experience being arrested in Maricopa County in Arizona, when she was protesting the state’s controversial Senate Bill 1070, most famous for its “show me your papers” clause, which opponents contended encouraged racial profiling.

“In that action, we were told the Phoenix Police Department was going to process you outside, and you’ll be out in four hours,” Foster said of her 2010 arrest. “Well, Sheriff Arpaio came out. We were there for 30 hours and witnessed horrific human rights abuses.”

The internal cultures at different police departments around the country vary extremely. “It really depends on who is in command that day and their history,” Foster said. This time, she continued, the police were clearly better trained and more respectful of protesters’ rights — being in the nation’s capital, she figured they were more used to dealing with protesters. And the relationship between protesters and police doesn’t have to be overly adversarial, she emphasized.

While Foster has plenty of experience hitting the streets for social justice, the Poor People’s Campaign feels different. For one thing, in addition to the national demonstration in Washington, protesters across the country assembled at state capitols. Secondly, Monday was just the first of a series of actions in the campaign started by Martin Luther King, Jr. in 1968.

“Usually when I’ve done something before, we’re doing something today. This is 40 days of action, with every Monday being civil disobedience,” Foster said. “And so it’s just really incredible when you have this fusion, all these progressive needs coming togethers. You have the moral imperative coming together, and you have the action to happen. I’m kind of bewildered that I have a front seat for it, but it’s been amazing.” A Colorado Poor People’s Campaign is in the making. “People should give me a call” if they’re interested in becoming a part of that, she added.

On Monday, Foster wasn’t wearing her ministerial robes — though there were plenty of clerical leaders donning their respective attire.

“This time, I decided to wear my veterans stuff,” she said. “There, I’m speaking out against militarism.” Since Sept. 11, 2001, more than 370,000 have died due to direct war violence, and an additional 800,000 people — at minimum — have died indirectly. Additionally, wars have displaced more than 10 million people, according to figures published by the Watson Institute at Brown University.

It’s just one of several areas of focus inspiring demands being made by the Poor People’s Campaign (poorpeoplescampaign.org/demands), and there is plenty of overlap between Foster’s roles as Unitarian Universalist reverend and U.S. veteran, she noted.

“It was a very spiritual experience with a lot of people praying because we’ve run out of things to do,” she said. “It is the time for prayer; it’s the time to put our bodies there because we have nothing left to lose.”