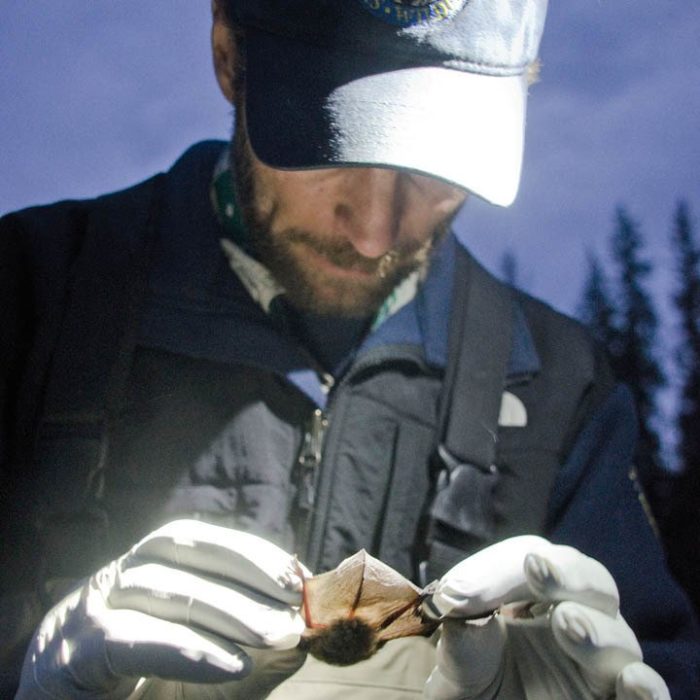 “Bat cursing” seems an apt description for the protests Rob Schorr received as he plucked his catch from the net and handed it to Dan Neubaum.

Measurements recorded, the chittering creature was allowed to return to the gathering dark.

Like me, the bat was the sole member of his species to show up on a Friday night for an event geared at getting climbers interested in bat conversation.

“For years we thought all bats used caves and mines, but there’s increasing evidence that there are a lot of other resources they’re using,” Neubaum explained. “Almost every climber you talk to has seen bats somewhere.”

Earlier in the day, Mike Schneiter of Glenwood Climbing Guides had taken the pair up into the Narrows area of the Crystal Valley to visit a route he’d pioneered years before and christened Chiroptophobia — the fear of bats. They didn’t find much, but did place some cameras in hopes of getting data that might help with management as White Nose Syndrome continues to decimate bat populations (particularly once-common little brown bats) in other states.

“I really think the wildlife is feeling the same pressures we are,” noted Neubaum, citing increased crowds nearly everywhere in the outdoors.

It was pretty peaceful down in Filoha Meadows along the Crystal River, however. Other than Schneiter and me, the only other member of the crew was Tristan Kubik, an entomology graduate student tagging along with Schorr in hopes of catching a peek at some fireflies. Eager to interject about the diversity and importance of insects (“the food that makes the world go round”), he nevertheless admitted less than fondness for mosquitos, which proved abundant.

With no climbers in evidence, Schorr and Neubaum donned waders and began stringing nets across a stagnant pond just downstream from the old movie set from “Tall Tale.”

In the quiet after the first catch, the biologists speculated on the factors governing catch rates. Some species of bats are better at seeing the net, families often get caught together and the quality and availability of water is key. After that, it’s a comfortable discussion sprinkled with facts, some fun — how tiger moths alter their flight to scramble bat echolocation — and some frightening — Schorr encourages me to check out videos of vampire bats sneaking up on chickens and running after boars.

Closer to home, however, there’s not much to fear.

“The rabies incidence of bats is highly inflated,” Schorr noted, although, “if you see one that you could approach and handle, don’t. Something’s not right.”

According to Neubaum, school kids are generally better than adults at seeing the cool instead of the creepy, but there’s still a long way to go.

“It’s something everyone has a misconception about,” he said.

Public events are a way to tackle that. Hopefully next time, folks show up.