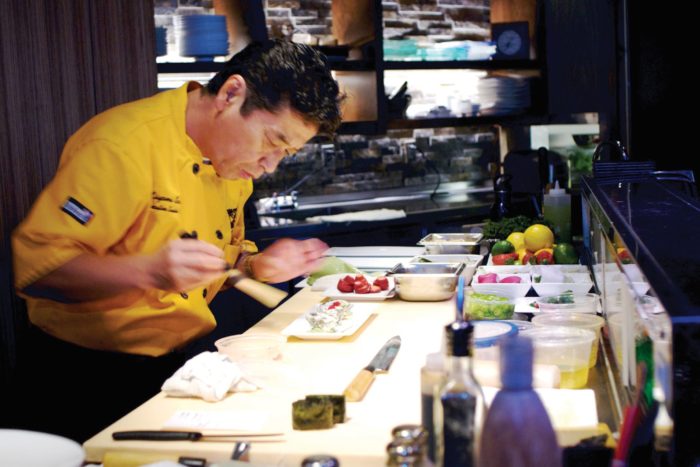 It’s been months since Town’s closing, yet passersby still peer into the window and even check the door. Pavel Osiak takes it as a good omen.

“I get a good feeling about that,” he said with a grin.

Osiak is a partner in the enthusiastic trio that moved into the space to open Roosters, a locally sourced, rotisserie-centric, relaxed dining experience in Carbondalians’ near future. When Osiak and his two partners, Mladen Todorovic and Kyle Raymond, discuss their plans, their excitement is contagious — they often finish each other’s sentences.

“The produce that we can get in the summer in Colorado is amazing,” said Raymond, who built his culinary career cheffing in Aspen since 2007 (most recently at the Grey Lady).

“Top shelf,” Raymond concurred. “We want to accentuate that.”

Following the example set by Town, Roosters will serve breakfast in the cafe space near the entrance — which makes sense, given Todorovic’s experience. He was the proprietor of Over Easy, an Aspen breakfast staple until Hillstone Restaurant Group bought the building his restaurant shared with Aspen Brewery and pushed both businesses out in October last year.

At the time, Todorovic was devastated. Now, he’s downright giddy at the opportunity to open at 348 Main St. in Carbondale.

“I am very fortunate,” he said. “With a lot of knowledge and hard work and experience, we can make this town proud and this place proud.”

By “this place,” he means the space still remembered as Town.

“We have an expectation here because of how well Town was received,” Raymond said. “We want to meet that expectation and exceed it in the ways that we can.”

If everything goes to plan — “which never happens,” Todorovic acknowledged — the gentlemen hope to open their doors in early July. They’ll start with breakfast. Then, once their liquor license is approved, they’ll move into dinner, hopefully a few weeks later.

“We’re going to make it a little more Over Easy oriented: we’re talking crepes and eggs benedicts,” he said.

“Fresh-baked pastries, fresh-squeezed juices,” Raymond added. “Even if we get overflow from Smithy, we’re going to have business!”

“We’re going to serve different stuff than they do, but I mean it’s still breakfast,” Todorovic laughed. But he’s not worried. “Competition only helps everybody. It’s not a fight for every seat.”

Both Raymond and Osiak are particularly excited about dinner possibilities.

“We can have a really good time with the rotisserie itself, from having our classics and basics to expanding out into some unconventional ideas as well,” Raymond said. “Stick the landing right off the bat…”

“Then we can start playing — a lot,” Osiak finished. “I think we can clash some cool ideas.”

Osiak has been been on the opening teams for both Base Camp and Sake in Snowmass Village. Now, he’s looking forward to his newest project. “Time for a new puppy: time for Roosters,” he said.

But in addition to the restaurant, all three men are thrilled to be in Carbondale. Todorovic, once a committed Aspenite, is looking for housing options in town. He daydreams about buying a plot of land where he can “maybe build a yurt.”

Above all, they want to steep in the community, they emphasized. That means being open to feedback and creating partnerships — for instance, Todorovic recently spoke with YouthEntity about creating opportunities for its culinary students at Roosters.

“I think this is going to be a great place for somebody to learn something about the food and wine,” he said. “The idea is running this really like a family kind of operation.”

“This is community based, rather than strictly a ski town where tourism is your baseline,” he said of Carbondale. “We want to be a community-based restaurant. We are Roosters, and we’re here to roost.”

Longtime locals still recount the days of Russets. In the next few weeks, the 225 Main St. location will reopen as Kenichi Izakaya — and while the longtime Aspen restaurant serves high-end sushi and sashimi, the Carbondale iteration will focus much more on curries, risottos and other one-bowl meals, according to owner Brent Reed.

An izakaya is essentially a Japanese pub, he explained, and he wants his new restaurant to stay true to that concept.

His inspiration for opening Kenichi Izakaya largely came from master chef, Kiyomi Sano. Sano, who has raised his two children in the Valley, makes a habit of cooking after-shift, family-style dinners for staff.

“He starts making some doshi stock and putting a bunch of scraps in it with a little wild rice, and he’ll make a little bowl for everyone who’s working that night,” Reed said. “‘Wait a sec, this is really, really good. This is probably better than anything I had tonight, and it’s not even on our menu!’” he continued about his initial reaction to Sano’s improvisations.

Reed is as passionate about the cuisine as he is the izakaya concept itself.

“Some of the izakayas in Japan were liquor stores,” he said of the history. “Then all the men went away to World War II, and the women couldn’t carry the sake kegs up the stairs. So they just started tapping the kegs and making food.”

That more casual atmosphere, coupled with Sano’s authentic family-style creations, seemed like a perfect fit for Carbondale, he explained, adding that it was a perfect fit personally, as well.

“Some of my staff lives down there; I live down there in the summer,” he said via phone from Aspen. “It seemed like a natural extension: fine dining in Aspen and izakaya in Carbondale. I think the food’s going to be better in Carbondale.”

While he’s confident about his new project, he’s also taking his time, aiming for a late June or early July soft opening.

When Reed talks about time in business and his goals for the future, he quickly switches from measuring in years to generations. “My nephew’s an apprentice sushi chef up here; my other nephew is a server. Then I’ve got another niece, she’s been helping,” he said, adding that he’s actively hiring service staff for Kenichi Izakaya. “It’s trying to create something that hopefully really can go beyond my generation.”

The Carbondale rumor mill has been swirling about the future of 689 Main St. What we can confirm is that Denver restaurateur Kade Gianinetti is returning to his roots to pair up with Silo proprietor Lacy Hughes and chef Flip Wise to reopen the space as a restaurant and event space.

“I can’t tell you the name right now; it’s not completely finalized,” he said.

“All I can really say is we’re going to try to use as many local farmers as possible. Our goal is to be really approachable for the community, [to be] a restaurant that serves not just one demographic in Carbondale but everybody.”

They’re aiming to open sometime later in the summer, once their remodel — which includes two hotel suites upstairs— is complete. “The back area will be for events and community gathering space, but the existing footprint of the 689 building is going to be the restaurant,” Gianinetti said. “We’re just trying to get all our ducks in a row so we are able to get in the space and maybe use it for a couple of private events before we really open.”

Additionally, The Beat is feverishly working to open its expanded, fully vegetarian restaurant at 968 Main St., hopefully by the end of July. They’ll start with lunch and ease into dinner service, according to the website.