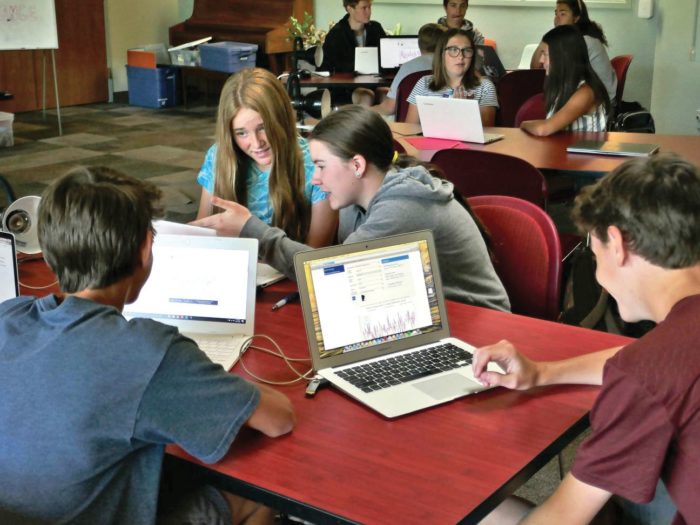 On Monday, June 11, I sat in on Eric Carpenter of the University of Colorado as he lead a Science Discovery workshop for local students in middle through high school.

He had the help of Dr. Erin Leckey, manager of Lens on Climate Change, Sarah Johnson, Wildrose Education owner and the Third Street Center, which hosted the event. Over the course of the weeklong session, students performed a series of experiments that allowed them to study the history of their Earth’s climate and how the choices they make as individuals will affect their planet’s future as well as their personal communities. I observed as the students applied what they had just learned directly into their personal lives as they used beakers, water and snow to create their own controlled snow-pack and weather, showing them how even minor temperature changes could affect their ski seasons.

These students also learned to film and edit their own videos, promoting change for a healthier climate. Each group of four to six students had one mentor from the University of Colorado Boulder’s Science department and one from Colorado Film School giving them instruction. You can attend a screening of these videos on Saturday, June 16, at 2 p.m. at 520 S. Third St.

One of the biggest pros of the program for parents, staff and the students has been that the whole week of workshops was entirely free.

“This was really important to us, that any kid who wanted to learn more and attend could. This whole thing was really only made possible by Anne Gold who applied for the grant at the National Science Foundation. It was also important that we get all different kinds of kids too. Not just kids that had previously shown interest in math or science, but others too so they could get exposure to it. If it hadn’t been for the grant we might have seen a much different demographic.” Dr. Erin Leckey says.

Both she and Sarah also expressed much appreciation to Eric Carpenter who kicked off the program.

Carpenter hopes students know that they are just as powerful as adults in spreading change.

“Big gas and coal industries are afraid of you. Even if you can’t vote, you still have the power of mindful spending and nagging,” Carpenter assures students. He encourages them to educate the people of Carbondale and the Valley by utilizing local resources, sharing their videos with the community and by “nagging” people into being more environmentally conscious.

“Youth is the most important when it comes to this stuff. They’re the ones who will have to live through these statistics and they’re the ones who can change them by getting people to care and by caring themselves.” Carpenter taught his first class on climate control 20 years ago and tells me that his favorite people to work with are children and young adults.

It was Sarah Johnson who originally brought the University into Carbondale. In 2017 she created the Youth Water Leadership Program and had a professional connection with the Cooperative Institute for Research in Environmental Sciences, or CIRES. CIRES had been looking to branch outside of Boulder with their Lense on Climate Change program.

“It was a perfect fit for us, all of their primary goals aligned with ours, so of course we were more than happy to host.” Sarah also encourages people who might miss the screening this Saturday to keep an eye out in November, as there will be a second screening in the fall.