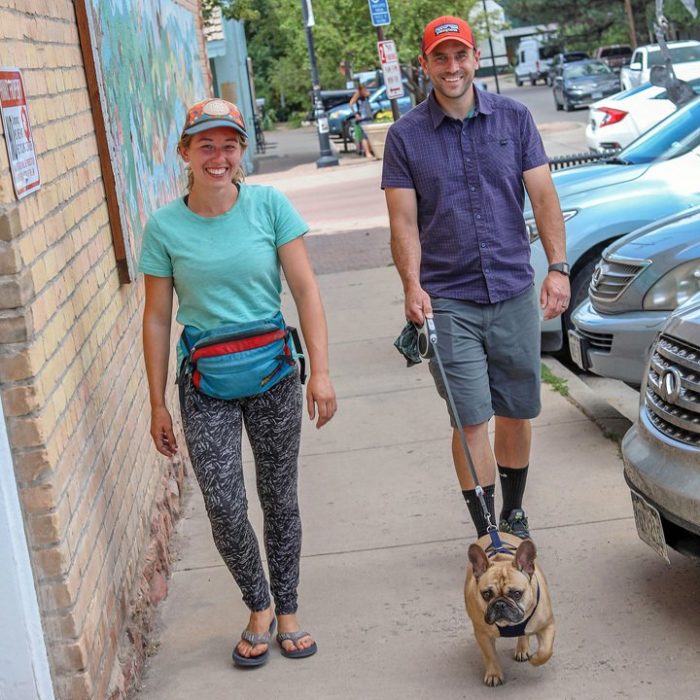 “I didn’t find out until a month before school ended that I didn’t have my job,” she said. That timing made it incredibly difficult for her to apply elsewhere — plus, she added, physical education is a highly coveted teaching arena. “In this valley, nobody leaves their PE position once they get it.”

Feeling distraught and out of options, Gann committed to starting something new. Instead of spending her days teaching archery, rock climbing and fly fishing to students, she would spend them playing in parks and hiking trails with four-legged clients as her own boss of her own business: Dog’s Best Friend.

“I’d been doing some dog walking on the side already just to supplement income, and I was like, ‘I don’t want to leave, so what the hell, let’s try it,’” she said of her convictions. “And it somehow worked out really well!”

That was in March of last year. Since then, business has boomed and she’s hired two associates, Erin Danneker and Jake Martenson.

Much like Gann, Martenson and Danneker were both in transitional places in their careers when they joined the Dog’s Best Friend pack. Danneker, who oversees the company’s marketing and manages operations when Gann is out of town, had left her role at Habitat for Humanity in order to establish her own design firm, Eyedrop Design. Dog’s Best Friend became her first client.

“I’m totally invested in doing whatever it takes to grow this business,” Danneker said of her role growing from contracted designer to employee. “It works out perfectly because I love it, and I also get the consistency of the bookings while I try to keep the security of my business and not freak out about, ‘Do I have a [design] client this month?’”

Martenson, who Gann hired as a full-time associate in May, was also facing a career shift. An avid athlete, he worked as a Snowmass Ski Patroller for nine years and trained his German Shepherd, Lando, with the Snowmass Avalanche Dog Rescue program.

Everything was going fine until he had to have a hip surgery.

“[That] made me start thinking, ‘Can I continue doing that physical job?’” Martenson said. “The surgeons, they said it’s just a bandaid fix right now. I’m due for a total hip [replacement].”

He had hired Gann to care for his dogs, Lando and Quickers.

“She was nice enough to let me know when she was at the dog park so I could socialize Lando with a good group of dogs,” he said. “We got to talking, and she hired me on. I was a lucky guy.”

“We got everybody that was in Quick’s life, and Ashley was a huge part of it,” he said. “It was rough — there are certain triggers that will set me off.”

But, he added, spending his days with others’ dogs helps both him and Lando move on. And his new job is much easier on his body.

Gann loves that her venture has created opportunities for others. “Now there’s three of us,” she said with a smile while recounting the business’ growth trajectory. And she’s not done. “We need to automate a lot of the things that we do in order to expand. We want to get a walker in Basalt, a walker in Aspen and a walker in Glenwood.”

The company’s services range from quick check-ins to let pets out and get fed during the day to full-on 24-hour care, with walks and hikes in between.

“Our regular walk clients are professionals who are working long hours in Aspen, so they’re driving and that’s the biggest thing that’s adding to their time,” she said. “So we come over and walk their dog three to five days a week.”

What’s her secret to managing two employees and more than 50 furry clients? “Calendars,” Gann said. “Ridiculous calendars.” And a fanny pack with plenty of poop bags and bear spray.