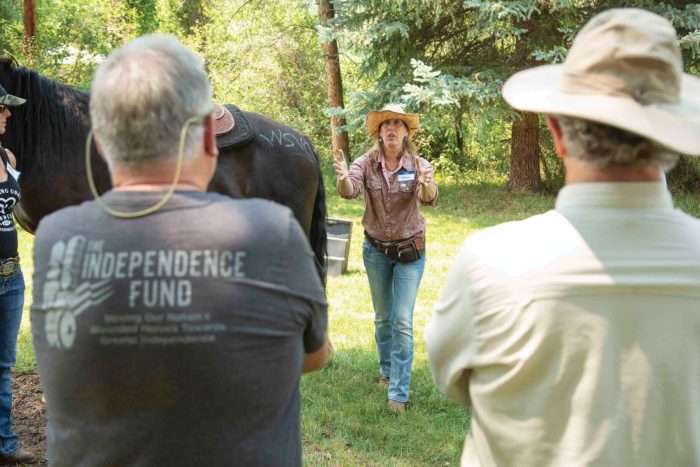 Sheryl Barto describes herself as an “autism mom who loves horses.” So when she discovered the Horse Boy Method, an equine therapy model tailored to ease some of the burdens associated with autism, it inspired her to found the Smiling Goat Ranch in 2015.

“I think with Horse Boy, it’s specifically designed for autism,” Barto, a certified Horse Boy trainer, said. “It’s not somebody who’s neurotypical saying, ‘I think this would work.’” Currently, Horse Boy is a recognized equine therapy in 20 countries.

It’s all about creating environments that produce oxytocin, Barto explained.

“People on the autism spectrum often have overactive amygdalas,” she said. “Overactive amygdalas in autism are flooded with cortisol, the stress hormone. [It’s] a good thing when you’re scared and in a fight-or-flight mode, because then you just focus on the one thing to get yourself out of that danger.”

But, she added, it can be detrimental to consistently be in that state.

“What we do through our sensory work is that we calm that nervous system. The whole key is in the psoas muscle and relaxing the psoas then produces oxytocin, which is the feel-good hormone, also known as the love hormone or the communication hormone,” she continued.

Part of the Horse Boy Method involves clients assuming different positions on the horse to increase psoas relaxation. For those able to fully ride, the three-beat rhythm of a horse’s canter is an excellent conduit for oxytocin production — and those benefits apply to other communities than just autism families.

“People with PTSD also have overactive amygdalas that are flooded with cortisol in an ongoing basis,” Barto said. “That starts killing off brain cells.”

Barto went on to explain that she had always wanted Smiling Goat services to be available to local veterans suffering from post-traumatic stress disorder, as well. Last weekend, that vision came together when the ranch hosted the Western Slope Veterans Coalition (WSVC) board of directors members.

“It was a great day, it really was,” WSVC President John Pettit said. “They did a nice job. I think it’s very beneficial.”

It wasn’t the first time Pettit felt a connection with a horse. In 1996, he spent an eight-day trip with Ripple Creek Outfitters in Meeker riding and fishing.

“We didn’t have the counseling and stuff like that [on that trip], but I think that’s when I decided to move to Colorado,” he recounted. “Three years later, I sold my businesses. It was pretty impactful. I enjoyed the horse; I missed the horse after I got eight days on him. We were pretty good buds.”

“A horse also has an enlarged amygdala because that’s how they survive in the wild: they have this fight-or-flight trigger,” said Zoe Hanlon, a Smiling Goat Ranch volunteer and Barto’s stepdaughter — whom Barto calls her “bonus daughter” — “and so they understand. They have that same brain function that a child with autism or a veteran with PTSD has, and so there is a connection there because of that.”

While clients that come to Smiling Goat Ranch will certainly be working with horses, that doesn’t necessarily mean they will all get on top of one, and that’s OK, too.

Regardless of whether the client is on the autism spectrum or is a veteran needing to manage PTSD, Barto emphasized that she and her team of volunteers intend to work with more than just the individual.

“We work with entire families,” she said.

In addition to ongoing autism services, Barto is actively looking to expand on Smiling Goat’s working with veterans — she already has two dedicated veterans’ days slated on the entity’s calendar, and she’s hoping that some people will return from those days to do more personalized sessions.