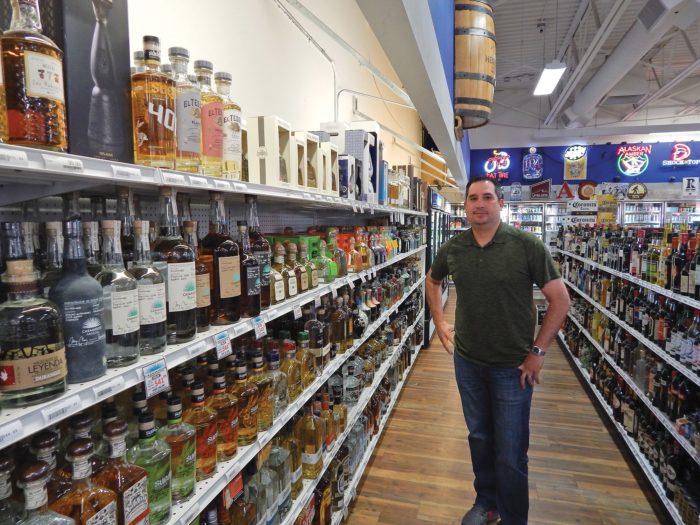 Carbondale’s neighborhood liquor store just got a whole lot bigger, though without giving up any of its small-town charm.

After an extensive remodel, Sopris Liquor and Wine is gearing up for a Grand Reopening celebration on Oct. 6. The store acquired a next-door lease this year and added significant square footage, becoming one of the top three liquor stores in the Western Slope region in terms of size.

The store’s growth can largely be attributed to the business savvy and passion of its owner, Kiko Peña. He grew up in Laredo, Texas and was making a living as a pilot operating aircraft for a bank. But the many nights away from his wife, Grace, and young children pressed him to reconsider his career path. Though Peña had been coming to Aspen for years, he knew little of Carbondale. But when a Main Street Mexican restaurant — Mi Casita — came up for sale, he couldn’t resist the opportunity to try his hand as a restaurateur.

“I said ‘I can do that,’ I’m Mexican,” said Peña jokingly. In reality, “It was really, really hard.”

After taking over the restaurant in 2006, Peña gained a reputation as a leader in the local business community. He joined the Carbondale Chamber of Commerce and served as its president in 2016. There, he met Terry Kirk, who at the time owned Sopris Liquor and Wine. But it was his only business that had employees, and Kirk was in Arizona half the year. Peña sensed there might be a win-win opportunity to acquire the store. The pair agreed to go to Mexico to co-purchase a barrel of tequila. “We called it Carbondale Double Down,” said Peña. “That’s how we met and started our friendship — drinking in Mexico.”

Soon after Peña approached Kirk about purchasing the liquor store. “Dude you don’t want to be doing that — just sell it to me. And boom, it came to pass,” he said. He bought the business on April 1 of 2014. Kirk still owns the building.

Peña said in addition to securing a great location for a liquor store, he believed he had a leg up, because he was in a position to develop significant customer crossover in both businesses. He had forged inroads into the community and was able to snowball the popularity of his establishments.

What sets Sopris Liquor apart from other stores? According to Peña, the size and selection set it apart. He can buy bigger case deals. “That’s why our prices are the lowest in the valley.”

He also has the resources to dedicate a manager each to one specialty: beer, wine, and liquor. “It’s impossible to know everything about everything. If you really want to geek out on some wines or beers, I have some people who can focus on their one craft,” he said.

This year, when a lease became available next door, Peña decided to go for an expansion. “It was an opportunity that I wasn’t 100 percent ready for, but if I let it go, I might never have had that opportunity again. Sometimes in life you have to jump on an opportunity whether you’re ready or not,” he said.

In addition to a more manageable parking situation, the store now has 11 doors of chilled wine, 20 doors of beer, 80 cold wines, 30 champagnes and sparkling wines, 30 large format 1.5 liter wines, and 20 boxed wines “chilled and ready to enjoy.” His chilled boxed wines have been very popular this summer, as customers can grab one ready to go for a party.

Twice a year Sopris Liquor and Wine throws a customer appreciation day sale. On Oct. 6, that celebration will be branded as the Grand Reopening Sale. From 9 a.m. to 11 p.m., wine and liquor is 20 percent off and beer is 15 percent off (though this does not apply to already discounted items). Free tastings will be held from 12 to 5, and there will be BBQ in the parking lot. There will be “shwag” and prize giveaways all day long. “It’s a great chance for people to come in and check out the store if they haven’t seen it,” he said.

Peña attributes much of his success to the town. “Carbondale in general is a town that’s been open and supportive. It embraces diversity, I’m lucky to live here…. I am very proud of being a minority business owner. Without Grace’s help I couldn’t have done it. She is also a strong Latina woman. Having businesses run by both us Latinos is pretty cool. I hope that it’s an example that with hard work and perseverance, anyone can do it,” he said.

What’s next for this busy entrepreneur? “I’m always looking,” he said. “I already have a couple ideas.”