A full nest of music and skiing 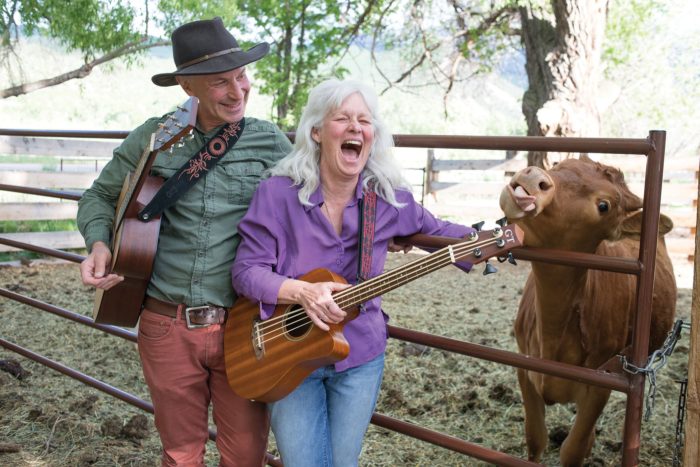 Their youngest daughter may be settled at Tufts University, but Dan and Pam Rosenthal don’t really resonate with the term “empty nester.”

“I like open nester,” Pam clarified. “Because empty nester, that quantifies that there’s something missing, that the nest is empty now — and that doesn’t really express my feelings. It’s like our nest has opened. Nest is still cool, still full, but the nest is open now and we’re out flying around.”

By “flying around,” she’s referencing the Rosenthals’ upcoming, and first, major tour together as musicians. The husband-and-wife duo share an 18-year history playing rhythm sections for larger bands, but their musical twosome is a more recent development.

“This acoustic thing started about three years ago,” Dan said. “We’re getting used to playing places that were kind of foreign to us, so we’re getting comfortable.”

Those places tend to be smaller venues in ski towns, like coffee shops and pubs — preferably with a fireplace.

So when the Ikon ski pass made its debut last January, the Rosenthals had an idea: what if they spent next ski season living out of a van, hopping from resort to resort to play music and make some turns? Now, they’re literally gearing up to do just that.

“We get asked all the time how do we do what we do,” Pam said. “We’re not trust funders; we don’t have a giant bank account. We’re kind of the regular working bees like everybody else.”

The answer, they both agreed, is creativity around cultivating an income.

“I’m a house painter in the spring and fall, music in the summer, and skiing and music in the wintertime, so I think it helps to have seasonal work,” Dan laughed.

Pam agreed. “It’s not something I think the average person with a regular 9-to-5 job that gets two weeks off a year could pull off.”

Still, there are tons of logistics that the couple had to tackle in order to make their vision a reality. Pam dedicated about a month to making phone calls to line up the gigs; Dan focused on converting their van into a winter-proof, solar-powered home for them. And there are still some unknowns once they’re actually out on the road.

“I think we’re openly communicating about our needs, so we’re devising plans,” Pam said. “We’re having conversations about how are we going to live this closely for this long. This is 29 going into 30 years; we know each other, and you need space sometimes. And how are we going to create that for each other when we’re living in this little van and skiing together and playing music together every day.”

In that regard, Dan is hoping the skiing will offer some much-needed open space. As a sort of practice run, the family trekked their daughter to Boston — home of Tufts University — and back home in the van. Along the way, they found all sorts of hidden-gem sidestops like waterholes.

“It was so sweet; you just roll up, park somewhere, and there you are!” Pam said. “Winter will be different; we’re feeling like we’re going to have to be ready for close quarters in the winter.”

Also, of course, overnight parking becomes more scarce in the winter because of snow plowing.

All of that said, the Rosenthals are much more excited than they are worried. And adventure runs in the family. Both daughters travelled for about two years between graduating high school and beginning college, from spending a month in South American jungles to studying art in France, the Rosenthal daughters have never shied away from a new experience — just like their parents. Their elder daughter Sarah and her husband Seth are even finalizing converting a bus into a tiny home to park in Jackson Hole for the winter.

“I really think it’s a reciprocal thing: we inspire each other,” Dan said. “The most bizarre thing to me is that Seth and Sarah, who just put this bus together, they were here a couple of weeks ago, and we were side by side, working on our van, them working on their bus. We didn’t plan this; it just kind of happened that way.”

The Rosenthals won’t be spending 100 percent of their time in the van, though — they’re estimating about 80 percent.

“We have some friends along the way we’ll stay with,” Pam said. “And actually, Ikon Pass has a passholders’ stream on Facebook, and I posted what we’re doing on there. We got 100 hits in a day.” Some of those hits included people offering their local abodes as shelter during that leg of their trip. “So we’ll have some places to go and stay inside, but we should be comfy in [the van].”

Reconnecting with old friends who’ve moved to other ski towns on their list mixed with the invigoration of discovering new places and the people that comprise those communities is some of what the Rosenthals are most excited about.

“Finding little, intimate nooks and crannies — whether it’s on a ski run or a small little place with a fireplace — it’s really the intimacy, that kind of thing,” Dan said.

And Pam acknowledged that skiing new terrain is another undoubted perk of the trip. “Dan and I have been in the industry forever, but I counted and out of all the resorts — we’re going to 38 resorts — I’ve skied at maybe seven of them. This is re-enlivening that passion for the skiing part for me.”