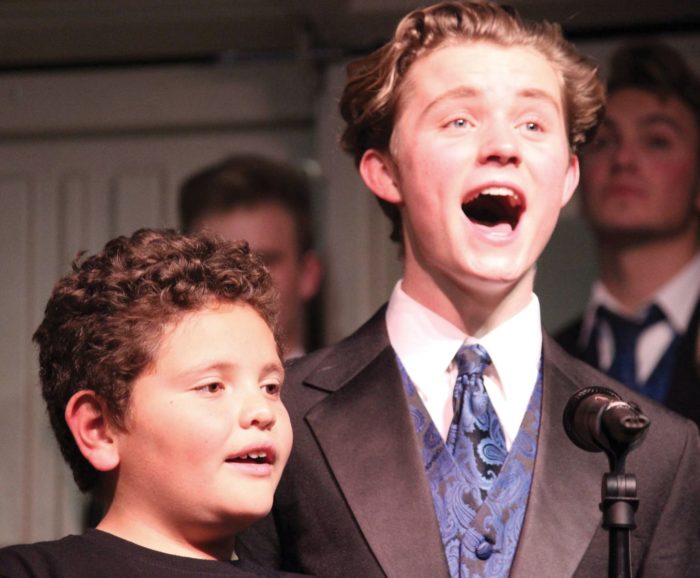 It marked a huge culmination for the arts programs in the school district.

“Last year, when I started the choir program, I had $60 in the choir account,” RFHS Choir Director Marcia Kuhlman said. “Some of that is just the nature of the beast in the performing arts, but I can effectively say we are in desperate need of funding. That’s why this big performance on Tuesday was so important — it’s our largest fundraiser of the year.”

“We [want to] build the gap between the Carbondale Creative District and what’s happening in our schools and help align those same ideals,” she continued. “We have a lot of incredible talent in Carbondale; we also have a lot of incredible talent in the school that nobody knows about. It’s part of the reason this event happens offsite as well: it’s really important for people of the community to see the students singing in the community. I’m not going to have the kids sell wrapping paper… it’s not something I’m comfortable doing. I’d rather capitalize on the skills the students have, which is doing a murder mystery or a concert.”

The murder mystery concept is a fundraising opportunity for the high school’s new drama club, which only got its start during the second semester of last year. That program, too, has an ever-growing student roster. It’s also a uniquely student-led department, in many ways, which has created leadership roles. Jessica Kollar, for instance, found herself in an assistant director role for “Hijinks on the High Seas,” which debuts at the school’s Auditeria Friday, Dec. 14 at 6 p.m. with dinner from Peppino’s.

“We needed to add more characters because we have a lot of people in our class but not a lot of roles,” she said of this year’s murder mystery. “We had it last year, but it was only for second semester, and there weren’t a lot of people who could move their schedules around. It’s crazy; I wasn’t expecting so many people to sign up!”

And this year’s production is already of a higher caliber than last year’s. Again, in addition to growing student interest, that comes back to funding.

The booster club contributed $2,000 toward an acoustical shell and risers — a third of the total cost, Kuhlman noted. RFHS Principal Brett Stringer allocated another $2,000 from his supplies budget, “which makes a huge difference for the sound because our Auditeria is not a professional auditorium. But when it comes to cutting corners, that’s something we have to do frequently.”

The students can hardly contain their excitement for the upgrades.

“We’ve never had anything at our school like this. Like, our set is an actual set. It’s still shocking,” Kollar said enthusiastically.

Ryan Camp stars in Friday’s show, despite it being his first performance at the high school (he’s performed at the Waldorf School and with Theatre Aspen). Even though he’s new to the arts departments, he’s watched their growth.

“The arts section of the whole Roaring Fork School District has grown a lot,” he said. “Last year, we didn’t have a chamber choir. It was just a women’s choir and a men’s choir, and they’d meet at lunch. And there wasn’t anything in the middle school, and now there is.”

The band plays on

It’s not just the choir and drama departments that continue to grow despite limited budgets — the Carbondale Middle School and RFHS bands and jazz bands are celebrating new accolades and new leadership. It’s been about six months since Mark Gray retired from his decades-long role as band director, and Tami Wisley moved from her position in Glenwood Springs to fill his shoes.

“It’s been a big shift for the kids: Mr. Gray and I [have] different personalities, but I feel like the kids are settling in and really getting into it. We’re making a lot of progress really fast,” she said. “I’m super passionate about kids having music opportunities. It’s in the classroom every day, being relentless in the pursuit of excellence and that we play the right notes at the right time, but also really laughing.”

Like Kuhlman, Wisley works to ensure her students have as many performance opportunities as possible. She directs band students at both the middle and high schools, and on Thursday, Dec. 13, the Orchard will again house student musicians from CMS and RFHS at the band concert, starting at 6:30 p.m.

“We have some fun holiday tunes, maybe a little bit of Star Wars and some other things for the show. We decided not to play the Black Panther,” Wisley laughed. “We just want to play stuff that kids like and is fun.”

Wisley has already seen significant growth in the band department, but she doesn’t have to manage that growth alone. Mark Johnson is an in-schools music instructor sponsored by Jazz Aspen Snowmass (JAS). The Aspen Music Festival, through a partnership with ArtistYear, also provides staffing in schools throughout the Valley, including a musical doctoral candidate in Carbondale.

In addition to instructors, sponsorships from outside entities include donated instruments and financial aid, which has been invaluable, Wisley emphasized.

“I think I’m probably up to about $20,000 in donated instruments so far this year — not just from JAS, but from other places,” she said, adding that she couldn’t yet have a full ensemble even if she had the students because she doesn’t have a tuba. “There are lots of things that we need. My budget at the high school is $350 for the year, and that pays for not even the amount of music that I buy in a year.”