Becoming a knight of the tabletop 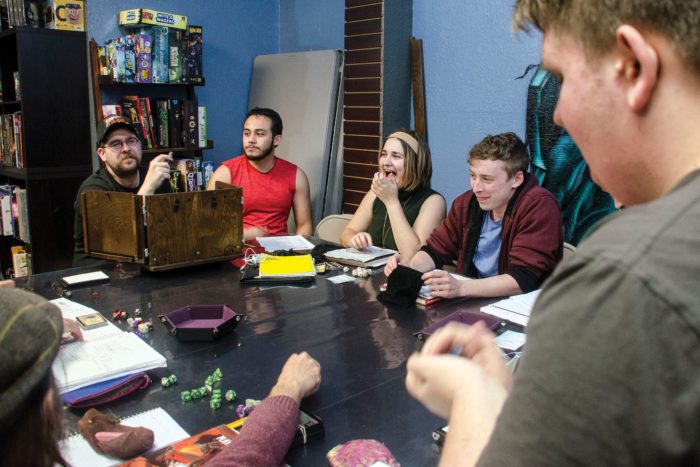 The geeks have won.

Elon Musk and Steve Jobs are cultural icons. Computers have gone from nerdy to cool to part of everyday life. Most Americans play some sort of digital game — even if it’s just Candy Crush or Farmville.

But every action has an equal and opposite reaction, and many people, young and old, nerdy and not, are turning back to in-person, hands-on gaming.

“I think that people are interested in getting off the screen for a while,” noted Geoff Alleger, owner of Tesseract Comics and Games (912 Grand Ave. in Glenwood Springs). “Especially for kids, it’s fun for them to play a game where they’re actually interacting with their friends.”

That’s handy for Alleger, who had been contemplating a doctorate in physics before parenthood and a desire to be closer to his family in Basalt prompted a change.

“It turns out I’m a way better dad than a physicist,” he said. “It’s been nice to turn old hobbies into a living. My job is to be half librarian, half fortune teller.”

That’s a reference to the process of trying to predict what folks will want a month down the road, particularly with respect to comic books. His fallback tends to be to order what he’d like to read or play, which seems to be working. You probably won’t see Settlers of Catan on his shelves, much less Sorry or Scrabble.

“I’m trying really hard to move away from anything you can find at Walmart or Target,” he explained. “Instead of going straight, they go wide. Every game is going to be very different.”

Casey Hinkson has brought a similar philosophy to her “Roaring Fork Tabletop Gamers” Meetup group (meetup.com/Roaring-Fork-Tabletop-Gamers) which served as the main hub for the local gaming community in the pre-Tesseract era and is still going strong.

“I moved here three years ago and didn’t know anyone or have anyone to play with, so I decided to reach out myself,” she recalled. “Lots of people joined the group right away and the first event I planned I had a lot of people show up and tell me they’d be looking for something like that.”

Through Meetup and Facebook, the group arranges weekly evening get-togethers for featured games and a monthly “Weekend Wargames” event with more time and a bigger group. A core group has emerged to keep it going, but new faces are always welcome.

“In the early days it was sort of hit or miss who was going to show up, but a core group has sort of emerged.”

“It’s a good way to meet people. You don’t have to have any skills or equipment or investment,” Hinkson said.

One of the newer additions is Ben Isak Green, who was pleasantly surprised to find folks with similar interests here after moving from San Francisco.

“Board gamers are my people. I want to be around them,” he said. “One of my main concerns about moving here was leaving my board gaming groups. I was so excited to find out about Roaring Fork Tabletop Gamers, and having Tesseract there means when my kids are teenagers they have a place to find other kids to play with.”

“It’s a golden age right now,” he added. “People have started realizing that games aren’t just for kids. The industry is explosively growing. So many new board games are coming out each year that the standards have gotten so high that if it doesn’t blow me away I may not play it again.”

It’s a trend that has its roots in the late 80s, when German designers shifted their focus toward games that didn’t eliminate players and stayed competitive to the end. Meanwhile, Green noted, people are both more isolated and have better tools to connect.

“The internet has given more people access to information about games and it’s also made it more democratic for indie publishers,” he said. “At the same time, people are wanting desperately this social intimacy you just can’t get from video games. The culture is much healthier. They’re real people sitting in front of you.”

Green has even taught a middle and high school board game design class, and ran a tabletop roleplaying group at Yampah Mountain High School — though he sees a distinction between the two.

And while the general growth of board games is a decade-long trend, role playing has had a particular popularity spike in recent years. Green credits some of that to programs like Critical Role and HarmonQuest. The recent release of a new edition of Dungeons and Dragons, the quintessential such game, hasn’t hurt either.

Tesseract hosts Dungeons and Dragons from 4 to 7 p.m. Tuesdays and Wednesdays, making it second only to Magic: The Gathering in popularity. It’s $10 to play, which can go toward the cost of a book if you get hooked. And if D&D isn’t for you — either because of the system or some old associations, don’t worry. Alleger will get you hooked on something else.

“If you’re willing to set aside your preconceptions, there’s a system for you,” he said. “I’m into gritty, consequence-focused roleplaying. Some people just want three hours of trying to be someone else. Others are looking for social interaction and a sense of community.”

Alleger’s own favorite system is Cypher, a story-first system that harkens back to his days at camp with no books or dice. He even participated in cover-to-cover rewrite in the “Vert” setting.

Regardless of the system, he thinks tabletop roleplaying is the ultimate example of more than just a game.

“Human beings have been doing collective storytelling since before we could write,” he said. “Instead of watching someone else’s story on a screen, it’s really rewarding to sit down with your friends and make something together.”