The flip side of vacation rentals in a tight market 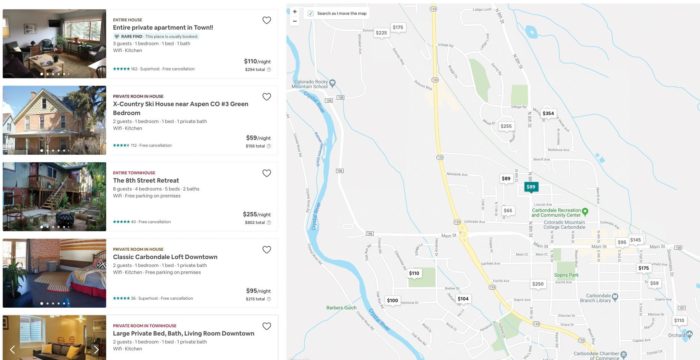 As renters struggle to find housing in the Roaring Fork Valley’s oversaturated market, some have pointed their fingers at landlords offering short-term housing instead — but they may be mixing cause and effect.

The property near her own home in Canyon Creek was previously just a regular rental — but that didn’t work out.

“My house was just short of destroyed,” she said. “There was very little recourse for me even for something as simple as rent.”

Now it’s available for visitors through airbnb.com, one of the most popular vacation rental services alongside the more venerable vrbo.com. And while it may seem counterintuitive to invite a steady stream of strangers to spend a night or two rather than have a consistent renter, there are more systems in place to support Dunlavy if, say, someone leaves a door open in midwinter.

“It’s all a risk, but if I have a problem with an AirBnb guest, I have an immediate third party that can handle the situation,” she said.

And folks appreciate the chance to get out of town into some semblance of the outdoors with a friendly local nearby to make restaurant suggestions — at a lower cost than many hotels. It is more work, Dunlavy admitted, and she feels for would-be permanent residents.

“I was a renter, and it sucked,” she said. “Shelter affects everything.We wanted to be the landlords that could help people.”

But she’s not the only one who made the switch due to a bad experience with traditional renters. Leslie Johnson was one of the first AirBnb hosts in Carbondale back in 2012.

“I got a little bit of grief in the beginning,” she said. “So many people need a place to live.”

Her property had been a full-time rental for almost a decade, but after staying in some vacation rentals on their own vacation, the Johnsons decided to give it a try.

“It’s been a great experience,” she said. “People are really respectful, and they’re hardly even in the rental. They come here to visit and to eat out, to ski or to visit family.”

“We’ve had the most minor things happen, and AirBnB pays for it right away,” she added. “The only time I’ve had real damage is when we rented it for a month or more. People are hard on other people’s property.”

Others, like Hank van Berlo, have spaces that may not be suitable for long term use, anyway. Originally designed as private apartment for a relative six years ago, it just didn’t prove large enough for someone full self sufficient.

“Anybody who has outdoor equipment needs somewhere to put it,” van Berlo observed. “It was already on our radar that it was going to take away from a worker bee, but we have two other rentals that are long term and at below-market rates because we want teachers to stay here.”

The space also serves as guest quarters for family, who van Berlo says seem to show up more often now that it’s there. There’s a system to block out dates if the space is going to be occupied or the host is busy — no questions asked.

Carbondale now has an agreement with AirBnb to collect taxes, which has made van Berlo’s job easier. Instead, he concentrates on keeping the space spotless and playing host. That process starts right when someone requests to book.

“I do a lot of due diligence before we accept somebody. Everything is based on peer review,” he said. “In five years we’ve met more people than we would any other way. How the hell somebody finds me from Thailand or Ireland or South Africa is beyond me. It just gives you a real sense of how small a world it is because of the Internet.”

That’s one of the big perks for Felicia “Flash” Trevor Gallo.

“I’m an avid traveler myself, so the people that stay are usually the kind of people that I would meet traveling,” she said.

Here situation is even more personal, with folks renting a room in her home — an antique that was moved from Glenwood in the ‘60s —rather than a separate space.

“They have to share a bathroom, and it takes a certain kind of person to be willing to do that,” she said. “It’s people that really appreciate that vintage and want to stay in it. It’s kind of like a bed and breakfast, but we don’t serve breakfast.”

It’s also one of the cheapest rooms in town, and would likely be a challenge to rent on a longer term basis.

“If I found the right roommate that hardly wasn’t home, I’d probably jump on it,” she said. “It does get old making beds, but I haven’t had any terrible experience and only a couple of odd experiences.”

And while she appreciates the needs of those looking to stay, she’s also sympathetic to those who just want to visit.

“The state’s growing by 10,000 a month and it’s mostly on the Front Range, so there’s all these people coming to check out the Western Slope,” she said.

And in the end, she has to be able to make it herself.

“It’s the only way I can afford to live here,” she said.