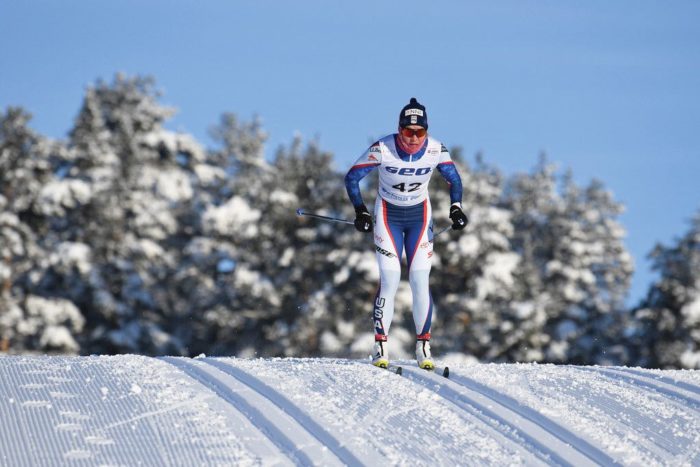 Evelina Sutro has just returned from Finland after competing in the 2019 Nordic Junior World Ski Championships on the U23 U.S. National Team. Currently a sophomore at the University of Vermont, Evelina traces her roots back to Carbondale, where she grew up.

“I love skiing at Spring Gulch, but I think my favorite nordic skiing in the valley is going up to the Maroon Bells,” Evelina said. “You just have to get up early enough to beat the snowmobile traffic.”

“She started out with the Aspen Valley Ski & Snowboard Club (AVSC), which does a great job exposing the kids to all types of skiing,” said Evelina’s mother, Gabriella Sutro. “At some point she tried nordic skiing, and got hooked. There was only an up-valley program at that point, but living in Carbondale and being so near to Spring Gulch, we kept pushing and pushing to get a group going down here.”

Evelina was one of the first to be a part of the AVSC down-valley program at Spring Gulch, and she was part of the nordic team for the one year she attended CRMS.

Evelina is Swedish-American, and with such a deep tradition of nordic skiing in Sweden, there was one clear path.

“She just loved nordic skiing, and we wanted to support her passion for it,” said Gabriella. Evelina went to Sweden and attended a Swedish ski academy, a boarding school that integrated nordic skiing and academics, where she finished out her high school years. When asked about her favorite life experience that has come from nordic skiing, Evelina says with certainty that those formative years at the Swedish ski academy are the highlight of where her passion for skiing has taken her thus far.

“My favorite part of nordic skiing is the racing,” Evelina said. “It’s what we train for all year long, and so when that time finally comes, it feels great. We’re running and weight training year round, and then roller skiing when there isn’t snow, and skiing when there is.”

Evelina’s mother and father still live in Carbondale, and so when she visits over the holidays she’ll train at her two favorite venues. And all that training has paid off. Evelina won the state championships the singular year she competed with CRMS, and her proudest accomplishment is placing third at the U.S. Cross-Country Ski Championships. Of course, making the U23 U.S. National Team is up there as well. Evelina is one of its five team members from across the country.

“The one thing that I have learned from nordic skiing is to never give up. Skiing well doesn’t happen overnight, training and racing take time. It’s not always great in the moment, but results do come if you never give up.”

“She loves skiing,” said Evelina’s mother. “And when your child loves something, you support them at it. We had no idea whether it’d be alpine, slalom or nordic, or if she’d want to pursue it competitively. They love something, and you support them along the way. In the U.S., there is a nordic support system at the collegiate level, but otherwise that support is hard to come across. Being part of a college team is a great venue for a lot of athletes, because it provides the resources and system.”

Evelina is pursuing a degree in Health Sciences at UVM.

“I’ve always had an interest in anatomy and physiology. At some point I’m sure I’ll want to go to graduate school for it. Balancing all this skiing and school can be tough, but once you get into the swing of it, it’s not bad. The professors are accommodating and supportive, you just have to stay on top of the work.” And her nordic goals? To wrap up her U23/Junior career and compete in the World Cup.