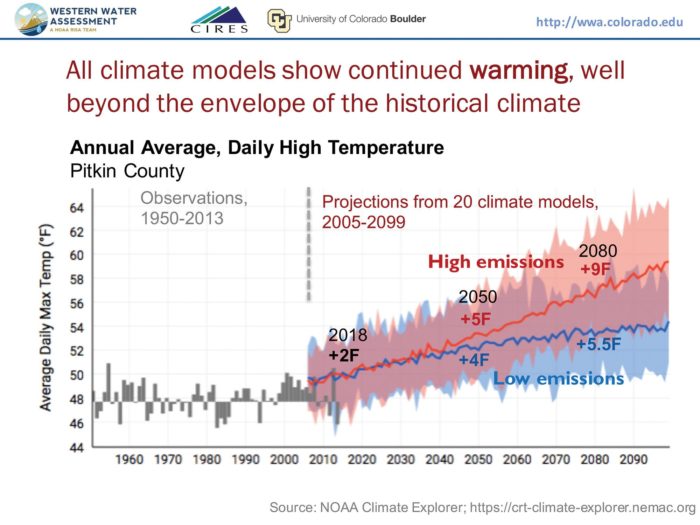 The Town of Carbondale’s approach to global climate change is expanding from contributing to the best case scenario to preparing for the worst.

Last autumn, trustees attended a two-day Vulnerability, Consequences, and Adaptation Planning Scenarios (VCAPS) workshop with the Western Water Assessment (WWA) group. A final report on the subject was completed in January, and a presentation by WWA’s Jeff Lukas was included in the Feb. 12 meeting packet as the board considered how its current budget squares with those findings.

The study found that rainfall in Pitkin County — which does not include Carbondale but is the source of almost all of its water resources — was unusually variable from 2000-17 but actually fairly comparable on average to the 20th century. The comparison is less flattering against the relatively wet years from 1970-99.

Tree-ring analysis, however, yields an even deeper context, with incredibly lean years inferred as far back as 1598. However, for extended drought, 2000-04 is right up there with 1622-26. Of course, tree rings aren’t a perfect predictor of streamflow, which in turn is driven by more than rainfall.

Therein lies the rub. Even if precipitation remains constant, the presentation notes, warming alone creates a drying trend due to evaporation. Water that falls as rain or melts rapidly in the spring can also end up downstream rather than soaking into the soil or recharging groundwater.

With average daily temperatures in Pitkin County expected to rise 5˚ F by 2050 even in low-emissions models, that means a significantly increased chance of drought, wildfires and other disruptions to life in the Valley.

“Here’s real data and real science about what’s happening directly here,” Town Manger Jay Harrington told trustees. “When you look at some of those temperature projections… they’re pretty significant in terms of impact… It’s coming. It’s coming quicker than I think a lot of us thought.”

And while the municipality has already taken actions toward combating climate change — including investments in renewable energy, the pending purchase of a hybrid police vehicle and adoption of a green building code — many of the action items discussed on Tuesday were more reactionary than preventative.

“Where we’ve really concentrated our funding is on the utility side,” Harrington said.

That includes securing water rights and increasing plant capacity in case of reduced output from one source — or a call that would bypass more junior rights. There is also money set aside for ditch and storm drain improvements and a new clarifier to produce more concentrated wastewater solids.

There’s plenty more that could be done, Harrington noted, from reducing park irrigation to accelerating the Town’s Climate Action Plan.

“I think last summer was a little wakeup call to folks what a river looks like with no water in it,” he said.

Ben Bohmfalk was certainly on board to take it a step further.

“We have to prepare for the inevitable reality and start adjusting,” he observed. “We’re focused a lot on the supply side, and I think we should have some discussions on reducing demand as well.”

Mayor Dan Richardson expressed an eagerness to have a community discussion on the topic, and Marty Silverstein was optimistic about public education.

“People can be taught new habits. It just takes effort and time,” he said. “If our national government isn’t going to address these issues, than it’s up to us to address them because it’s going to affect us locally… I think we really lead by example, and we can do that with water.”

That said, he didn’t expect it to be an easy discussion, particularly when it came to the town’s less-than-efficient ditch system.

But, in Harrington’s assessment, it’s worth a try.

“I honestly think this is one of the most important things you as a board can work on for the next couple of years,” he said.

Trustees gave final approval for Main Street Marketplace construction and heard from First Bank officials that groundbreaking will take place before the end of the month with opening sometime in October. Construction is also expected to begin on the new City Market by the beginning of June for completion in late 2020.

The board also went into executive session to receive a litigation update regarding lawsuits filed by Pat Kiernan and Tumbleweed.