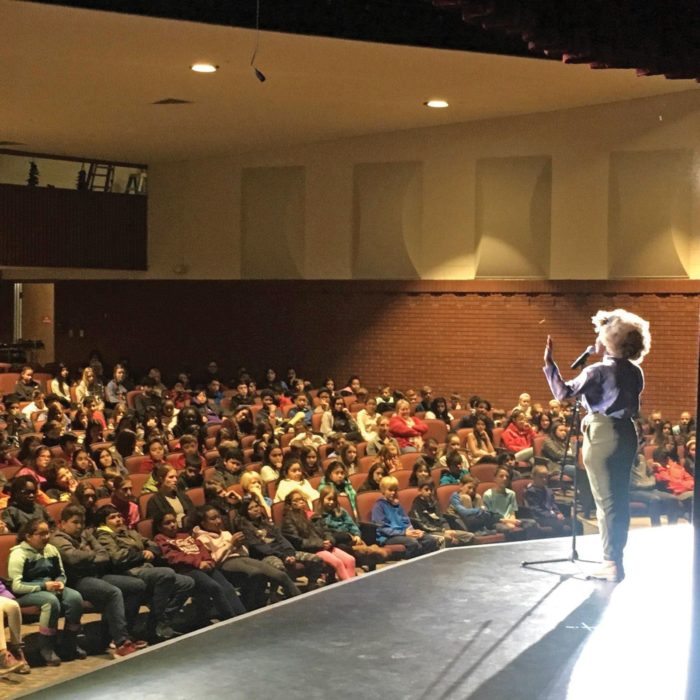 Altmaier was so inspired by what she learned that she sought to continue the work after the program’s completion, so she approached BHS Capstone Site Coordinator Nanette Weinhold about her intentions.

“Basically, she came to me last year and she told me she wanted to put something together for her classmates at Basalt High School. She created all these lessons, and the night that students were supposed to arrive, nobody came. She was kind of heartbroken,” Weinhold said.

That wasn’t the end of her story, though. Weinhold consulted with longtime friend and local poet Patrick Curry, who suggested Altmaier present to his local poetry group.

“She condensed her lessons into one for the evening, and I don’t know a lot about slam poetry, but I sure learned a lot,” Weinhold said. “Some of the people in the group, [they’re] seasoned poets. It was neat to witness them being supportive and just living in and writing their own poems. She was super nervous, and they just went with it. What was so cute, after they read their poems, she says under her breath, ‘I’d really like to go to school with you guys.’ I think she really felt like she found her tribe, despite the age difference.”

“Jo was one of our slammers last year, and I think she sat in on some workshops and that really ignited her passion for slam poetry,” she recalled.

Now, Altmaier has her own YouTube channel dedicated to her poetry.

Scott agrees. Now in its sixth year, the program continues to grow, and Scott sees more and more students participate in the workshops and assemblies at every school, every year. The energy is downright contagious.

“My favorite part is just watching a kid in a workshop who does not consider themselves a writer, watching them take that bold step, read their poem in front of their peers and then get some applause or some snaps, and then watch their face: “I just did that!” To watch that dawning realization and just joy come over their face, that’s a powerful experience,” she beamed.

Scott estimated that this year, more than 3,200 students in the Roaring Fork Valley participated. Poets Myrlin Hepworth, Mercedez Holtry, Toluwanimi Obiwole and Meta Sarmiento led the workshops and assemblies between Feb. 4 and Feb. 15, with a culminating Youth Poetry Slam at the Third Street Center at 6:30 p.m. Friday, Feb. 15.

“All high school poets who want to participate are welcome to show up at 3 p.m., then we’ll draw names based on who wants to actually slam,” Scott said of Friday’s event. “We’ll do about 20 and then two ‘sacrifice poets,’ so about 22 slammers. We will draw for names so it’s egalitarian and luck of the draw.”

A sacrifice poet performs first in order to warm up the audience and set a standard with judges, two of whom are bilingual.

“We encourage poems in Spanish, in English, in Spanglish,” Scott said. “All poems are welcome.”

That was true of the workshops and assemblies, as well.

“We were at an assembly at Glenwood Springs High School, and one girl got up and read in front of her entire student body an entire poem in Spanish,” she continued, adding that the student’s poem described a woman’s fear to walk through the world because of violence against brown women today. “She of course read it beautifully and had a gorgeous presence on stage, so we were really happy to see that.”

Scott is confident that the Youth Poetry Slam will feature similarly moving works.

“It represents our community coming together to talk about issues that are on the minds and hearts of our youth. It’s a night that celebrates youth voice in this valley, as a unified valley,” she said. “It’s a big opportunity for kids to be brave and speak their truth and perform some poems that they have been working on for a couple of weeks.”