A cooperative solution for a coop co-op 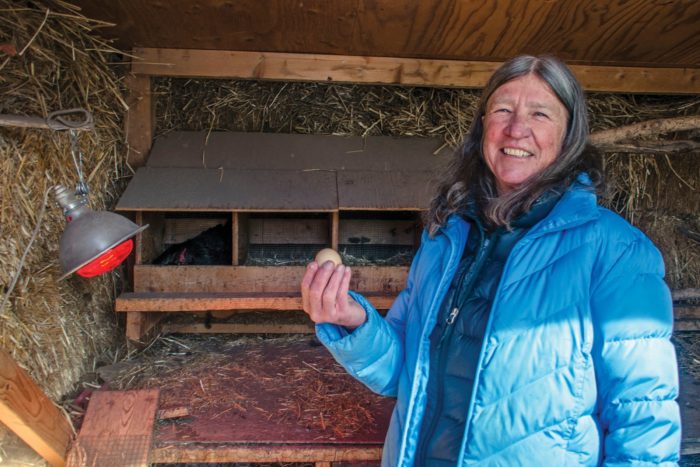 The Aspen Center for Environmental Studies (ACES) is in the process of building employee housing on a small lot donated by longtime Carbondalian Kim Stacey. While no money changed hands when papers were signed at the end of last year, there is at least one condition: the perpetual maintenance of the cooperative garden and chicken coop that Stacey and her husband, John Hoffmann, have run for decades.

The pair purchased the property next door in 1973 and started building the following year. The folks who owned the parcel lived elsewhere, so neighbors co-opted it as a garden, then a chicken coop.

“I’m into both of those things, so I just helped out and eventually it became mine,” Stacey said. “Since we were using it, I thought it would be nice to own it.”

The offer to buy in the early ‘90s came just as Stacey received an inheritance.

“It’s just pure luck that we bought everything when we did,” she said. “I probably couldn’t afford to buy that lot now.”

Over the years, it became a public service as much as a personal calling, not unlike the adjacent right-of-way several neighbors lease but keep public.

It’s a lot of work, however. They once had to rebuild the coop after a fire. Predators — from the proverbial fox to skunks and raccoons to redtail hawks and even people —  are always a problem, though less than they used to be. And while others helped out (a requirement for the Town to allow more than six chickens in one place), the brunt of the burden still fell on them.

“We really can’t go anywhere for a long period of time,” Stacey observed. “Leaving the garden is one thing, but the chickens are another. You really have to have someone who’s responsible for it.”

Still, Stacey wasn’t ready to just sell the property. For one thing, the next owner could easily fill the small lot with a large house.

“If you sell it you don’t get to have what you want. It’s got potential with someone energetic,” she said. “The town went through that infill stage, but I really think people need open space. Carbondale has been a good home, and we have enough.”

So she set out to find an organization that might be willing to take over stewardship.

“We happened to go out to Rock Bottom Ranch one day and I wondered if they’d be interested,” she said.

They were. It took three years, but with plenty of pro bono help from lawyer Thomas Adkison, a formal agreement is being put into action. Katie Schwoerer, Finance and Operations Director for ACES, is quick to credit Stacey.

“Kim is just such an amazing person with a beautiful community vision. It’s such an honor that she would choose ACES for her very special garden and chicken coop and land,” she said. “It really fits within our environmental mission. Educating the public about where there food comes from lets them make better decisions.”

While the agreement with Stacey is unique in many ways, it’s not without precedent. Most ACES employees are already living in company spaces.

“ACES had a lot of foresight decades ago to create housing,” Schwoerer said. “It allows us to provide our extensive programming in a valley with extraordinarily high housing costs.”

A four bedroom home designed by Greenline Architects with a balance of energy and cost efficiency is beginning construction and should be done by late summer in time for some of ACES’ education team to move in.

“Our reach is continuing to move down the valley, so it’s the perfect location,” Schwoerer said.

The organization has about a year to fully take over maintenance of the property, so some of the specifics are still being discussed.

Meanwhile, Stacey is thrilled to be providing a housing opportunity and doesn’t expect to be sitting still much with plenty to do around the remaining property. Still, she said, “I can’t wait to sit on my front porch and watch someone else work.”