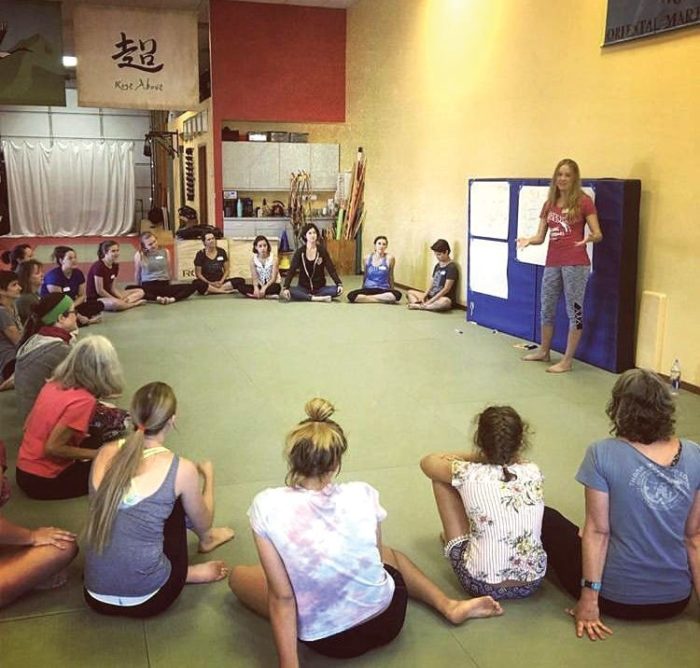 One of the perks of winning the geographical lottery — such as being born in the Roaring Fork Valley — is that you’re afforded the opportunity to study the rest of the world’s underbelly from a safe distance.

But Ruthie Brown is going out of her way to use her local experiences as a means to be a more informed guest in her future travels, and she’s not shying away from tough topics.

“I’m in AP English Language, and we have to write a 20-page research paper,” the Roaring Fork High School sophomore said. “So I’m writing mine on sex trafficking in Nepal so I will have background before I leave.”

Brown, with an already booked April 1 departure, will be spending most of her time at her aunt’s yoga center in Pokhara, about 125 miles from Kathmandu — but instead of breathing through downward dog, she’ll be teaching girls from a local children’s house martial arts. It’s the natural extension of the three-class series she led in Carbondale to complete her black belt last December, she explained.

“For your black belt, you have to do a project. I pay a lot of attention to the media and what’s happening around the world and U.S., so I came up with the idea of Women Fight Back, which is a self-defense class for women,” she said. Her sensei, Carbondalian and Rising Crane Training Center proprietor Karen Bradshaw, helped her organize the classes.

“We advertised it through Facebook, and she helped me plan it and teach it. It was one of the biggest classes we’ve ever had for people just showing up,” Brown recalled. “It was 20+ people in each class, and for martial arts, those are pretty big numbers.”

From there, she was hooked.

“I got to be a part of something that was a little bigger than myself,” she said.

Word had spread, and soon Brown was receiving inquiries from organizations in Paonia, Glenwood Springs and Aspen. None of those calls materialized into actual classes, but they got her thinking about the possibility of future programs.

“My aunt heard about it and was like, ‘You should come to Nepal because we have high levels of sex trafficking.’ So I looked in to it, and it turns out they really, really do,” she said. She had started Women Fight Back in response to the pervasiveness of general violence against women in society; this was a sophisticated, opaque system that swallows the most vulnerable in a given population.

“A big part of this project is not only bringing knowledge to them but also awareness to the community around me because it is an epidemic and needs to be faced. In Nepal especially, many of these people face it,” Brown said, adding that illiteracy and poverty keep people especially vulnerable. “Girls don’t know that sex trafficking is a thing. It’s not something they learn about, so it makes them [more easily] lured into these traps and then sold and brought to these brothels in India.”

In addition to partnering with the Namaste Children’s House — which offers lodging and schooling to 39 abandoned, homeless or orphaned children aged 5 to 18 in Pokhara — to offer self defense training, Brown wants to contribute to the larger fight. Through her research, she has identified Maiti Nepal as a worthy opponent to traffickers. Just earlier this month, the organization reported the successful rescue of 179 victims, according to the Himalayan Times.

“They have been a big name in all of my research, and I think what they’re doing is really incredible, so I want to help,” she said.

To that end, Brown set up a fundraiser through Facebook (tinyurl.com/RuthieToNepal).

“I will be using the money to pay for airline tickets for my sister and [me]. We only have to raise $500 more until that cost is covered, and the rest will be split between the orphanage and Maiti,” she said, adding that in addition to her sister, her grandfather and his girlfriend will be joining. “My parents were very wary about sending me across the planet without anyone.”

Along with her martial arts training and research, Brown’s aptitude for language will further arm her in her efforts abroad: she’s been using Duolingo to learn some Nepalese (she’s already used the app to further her Japanese and Spanish fluencies) — though body language is universal, she noted.

“I love new cultures; I love diversity, so I’m really excited to be immersed in a new country,” she said. “But also… maybe I can bring body confidence and positivity. Personally, martial arts has helped me with my body, so I hope to inspire that in them as well.”