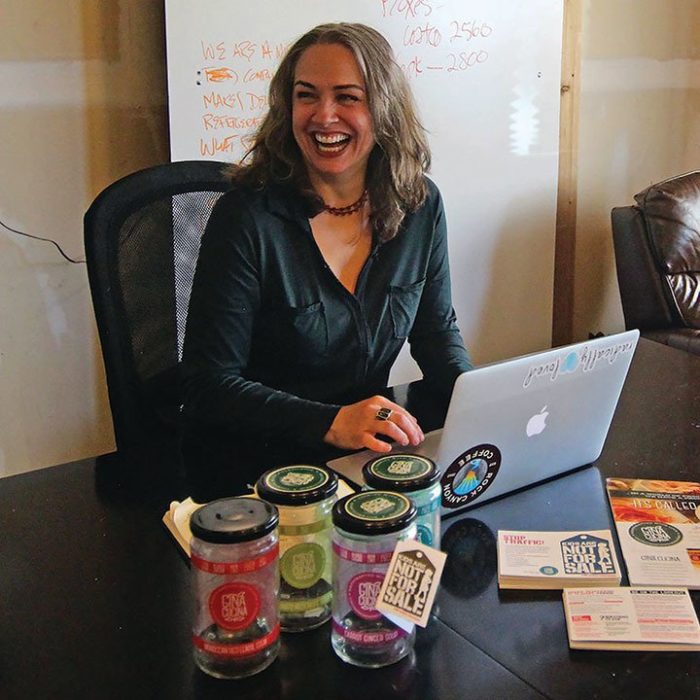 The first thing one notices about Gina Stryker is her bubbling energy. She is the founder of a successful prepared-foods startup enterprise, Gina Cucina, and is the mother of two sets of twins—all of which keeps her quite busy.

She is also a person of strong convictions. Gina Cucina, which makes a variety of soups, sauces, pestos, and other delights, is committed to using only organic, non-GMO, gluten-free ingredients.

It also conducts every component of its operation in a sustainable and responsible way — a philosophy called Total Societal Impact, espoused by Wendy Woods of the Boston Consulting Group (see her TED Talk).

“I believe in giving back,” Stryker noted in a recent interview.

It should come as no surprise, then, that after a friend of hers attended and told her about an Aspen Institute lecture several years ago by Monique Villa of Trust (an international organization fighting human sex trafficking), Stryker decided to become deeply involved with this growing and heinous activity.

She recalled a brief encounter with a man in a van when she was a teen; some time after that, he abducted a nine-year-old girl, who was never seen again.

Reflecting on the lecture and on her childhood memory, she realized that human trafficking was as much a local problem as a global one and was much more widespread than she had imagined.

The numbers are staggering. It is estimated that 40.3 million people are the victims of sex trafficking worldwide. About three-fourths of them are female, and one-fourth are children. In the United States some 250,000 children are thought to be trafficked annually.

Perhaps most shocking of all is the statistic that, on average, a person forced into the sex trade will be dead within seven years: they are either murdered by their pimps or “handlers,” die of drug overdoses, or commit suicide.

After attending some yearly sessions of Villa’s Trust Conference in London and learning more about this modern-day scourge, Stryker decided it was time for action.

“Human trafficking is slavery,” she declared, “Period!” The fight against sex trafficking became the mission of her growing company.  “Our entire team became committed passionately to this cause,” she said, “It isn’t just about the soup.”

She began by placing “Kids Are Not For Sale” labels with details about trafficking on all Gina Cucina products and persuaded Whole Foods, one of her main retail outlets, to prominently display information with her products on trafficking and what individuals could do to spot and report suspected instances.

In addition, after she won a FedEx small business grant in 2016, Stryker was invited to serve on the company’s Entrepreneurial Advisory Board, she used that platform to persuade the company to look into training its drivers on how to look out for and be aware of signs of trafficking.

The company announced its partnership with Gina Cucina in early 2018, and the training has paid off: within weeks after it was implemented, a FedEx driver took steps that saved a 14-year-old girl.

Her company is also working with one of its distributors to develop a program to train their fleet of drivers.

Growing awareness of human trafficking is helping closer to home, too, Stryker notes. In the fall of 2017, a prostitution trafficking ring was broken up in Grand Junction, and last year two people involved in a similar operation at a hotel in Glenwood Springs were arrested.

She adds, “The more we raise awareness of sex trafficking the more we stop demand,” citing the recent widespread publicity surrounding the arrest of New England Patriots owner Robert Kraft for soliciting sex at a location that was found to be linked to trafficking.

“Human sex trafficking is a crime of affluence,” she noted, “The people soliciting these victims are so disconnected from the reality of it they can allow themselves to believe that a 14-year-old wants to sell herself for sex.”

Stryker has bigger plans for Gina Cucina. “As we grow, we have aspirations to be the umbrella organization for the cause. There is a lot that happens here in the Valley, and I want to be involved” with the fight against trafficking.

She hopes that when her business gets to a certain level, she can set up a not-for-profit anti-trafficking foundation. Given her determination and her track record so far, it seems likely that this will happen much sooner than later.