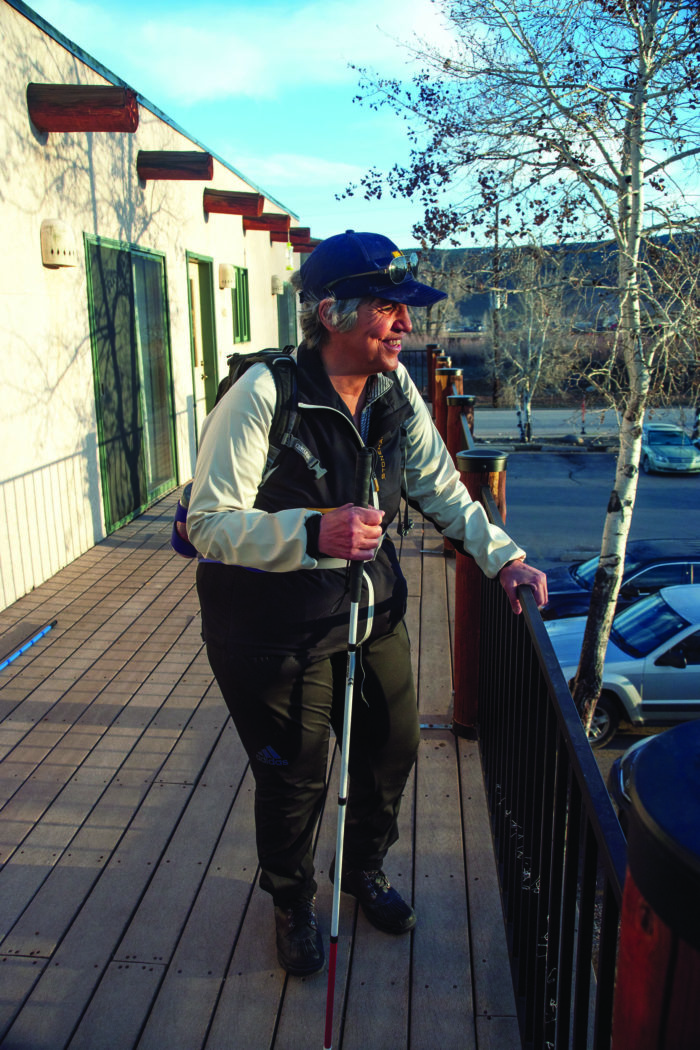 A little less than a year ago, Franchesca Campione attempted to learn how to walk to the bus stop — a daunting prospect for someone who is blind.

Although it’s less than a quarter-mile, the route first follows a section of street that has no sidewalk, then goes through a roundabout with no audible signals.

“I’m pretty good with my cane,” Campione says. A 64-year-old retired financial analyst who has skied with Challenge Aspen guides, she’s not frail or faint-hearted. “Just getting through the roundabout was terrifying, not to mention Route 133,” she explains. “My friends think I have a better chance of drivers slowing down for my white cane than for the flashing lights.”

Campione’s terrifying walk was part of a “functional assessment”, a test that qualifies a disabled person for paratransit, a special service that bus companies are required to provide for people unable to use regular transit. That assessment, and the rules that govern paratransit eligibility, come from the Americans with Disabilities Act (ADA), a landmark civil rights bill that became federal law in 1990.

Campione filled out a five-page form describing her disability — she has been totally blind for 15 years — then went through a home-visit assessment. After that, Susan Merritt, ADA Complementary Paratransit Service Coordinator for RFTA, took Campione through multiple three-hour training sessions over several weeks, walking back and forth from Campione’s home on West Main Street to the Carbondale Circulator Subway bus stop.

Merritt warned Campione that she wasn’t a Colorado-certified orientation and mobility trainer for the blind. No such specialist existed in the Roaring Fork Valley — or even in Grand Junction! Merritt had received some training, and the Roaring Fork Transportation Authority (RFTA) was attempting to meet ADA requirements on its own.

“I think the real purpose of those walks was to magically teach me to go through the roundabout and over to the Subway so I wouldn’t need a ride,” Campione avers. “I finally quit in utter frustration and said, ‘I need to use paratransit.’”

RFTA provides paratransit for towns that have MOU agreements with it and, hence, pay into the system. Carbondale pays in through mill levy taxes. Free paratransit service is provided “seven days a week between 5:02 a.m. and 8:41 p.m.” including weekends and holidays. Riders must reserve a ride a day ahead of time and live within ¾ miles of a RFTA route.

Although she meets paratransit qualifications, Campione now goes out of her way to ask friends to drive her to the recreation center, bank or grocery store. The reason: “When I call for paratransit — a service that is supposed to be available to me — my self-esteem and independence take a big hit.”

Campione is often told that only “the Traveler” can meet her needs. A RFTA driver must be specially assigned and paid for a four-hour shift. The driver comes from the Traveler’s Glenwood Springs base to Carbondale, picks Campione up, drives to her Carbondale destination, waits for her, then takes her home — and drives back to Glenwood. Does it make sense for a driver to spend all that time just for a 15-minute trip to the bank?

That’s a good question. The answer is complex. Why a trip would be handled by paratransit, versus a related service called the Traveler, depends on the complex rules that govern ADA, Carbondale’s relationship with RFTA, Garfield County and the Traveler.

When calling for paratransit — which RFTA’s website lists as running “seven days a week” — Campione has often been told that she cannot ask for rides on weekends or holidays. The disconnect has to do with those complex rules: Paratransit operates only within ¾ mile of bus routes. Any trip a Carbondale passenger takes outside that ¾ mile limit requires the Traveler, a bus that RFTA operates under contract from Garfield County. The Traveler doesn’t run weekends or holidays. It operates in a five-mile zone along much of Route 82 and costs $2 a ride through a donation and voucher system.

“When I lived in Aspen,” she recalls sadly, “RFTA drivers would sometimes pick me up in a jeep and take me where I needed to go. Sometimes, when that wouldn’t work, they’d just give me a voucher for a taxi.”

Rich Burns, now RFTA’s Lead Supervisor for Traveler Services, often gave Campione those rides, a decade or so back. “I wish we could still provide that level of individual service, but our customer base has grown exponentially,” he explains. “In this day in age, it’s almost impossible with all the different kinds disabilities in this valley. If someone has a barrier that keeps them from getting to the bus stop, we work with them to get that barrier removed. We don’t want to just throw someone to the wolves.”

Turning reflective, Burns says he worries about the impact the approaching wave of active, outdoor-oriented Baby Boomers will have on transit and civic services. “It’s unprecedented. I don’t think anyone has really planned for the Boomers, and I say that knowing I’m one of them.”

Campione says that when she wanted to move to Carbondale, friends told her she’d find it “walkable and friendly.” It hasn’t been. Campione’s inability to get around has led to isolation. Even a $500 grant from Senior Matters didn’t help much; it proved impossible to hire someone to take her to evening or weekend events or help with tasks like cooking or sorting mail.

“I didn’t need rides so much back in Aspen; those streets are a lot more straightforward. They don’t curve and wander, and there are sidewalks pretty much everywhere. Here, the bank may be a five-minute walk for my friends, but not for me.” Campione’s voice trails off. “It’s really hit or miss around here. Nobody has a network. It’s just really hard for disabled people here to get around or find the help they need.”