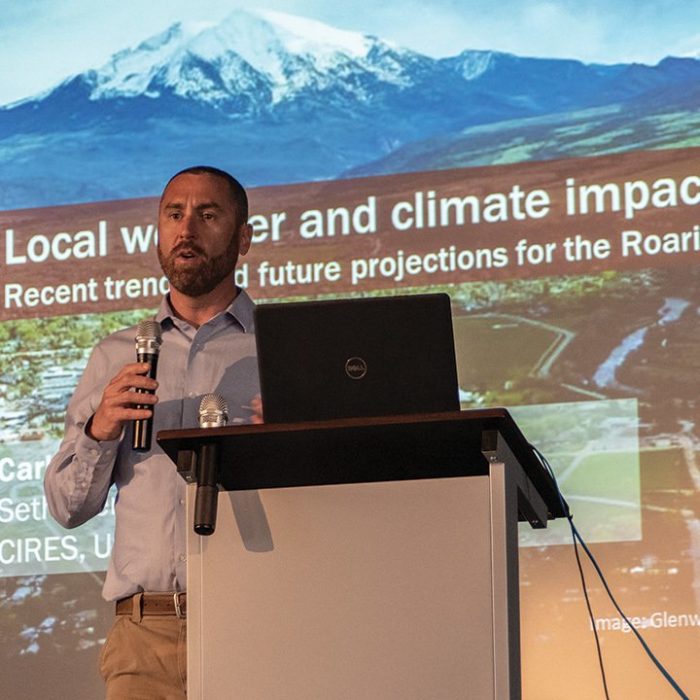 Carbondale Town Trustee Heather Henry is remaining optimistic in the face of some pretty dire numbers from the Western Water Assessment (WWA).

WWA, an applied research program through the University of Colorado-Boulder’s Cooperative Institute for Research in Environmental Sciences, compiled a report for the Town of Carbondale as part of its work addressing vulnerabilities and adaptive capacities in the face of climate variability.

“It can be overwhelming; it can be shocking; it can be hard to think about,” she said in the April 2 public meeting about Carbondale’s drought planning and adaptation. “But I’m going to borrow a little phrase I heard recently from [Rocky Mountain Institute’s] Amory Lovins: Despair and complacency are equally unwarranted. As you listen to this presentation and listen to the action steps that came out of this workshop, kind of keep that in mind.”

The 47-page report is available on the Town’s website, and WWA Research Integration Specialist Seth Aren presented its conclusions to about 30 people at the Third Street Center meeting. In the wake of last year’s drought — and the still-seared memory of the Lake Christine Fire — the Town was primarily concerned with water management, he said, so that was the area of focus of the endeavor.

“I want to put drought in context,” he said, adding that definitions are important when discussing an issue as complex as climate change. “When we think about a water budget, that means the amount of water that comes into our system here in Carbondale and the amount that’s exported. A basic water budget is precipitation minus evapotranspiration, and you get runoff from that. By evapotranspiration, I mean evaporation from soils — sun and temperatures evaporate water from soils —  and then transpiration of water from plants. When you take that away from precipitation, you have your runoff.”

During a normal year, he continued, the Roaring Fork River sees about 30 inches of annual precipitation. After evapotranspiration, that leaves about 12 inches for runoff.

“You almost have a double whammy with drought. During severe drought, we may have 20 inches of precipitation,” he explained. “And instead of 60 percent lost to the atmosphere, we have 70 percent — so that leaves only six inches for runoff.”

That “double whammy” is the result of below-normal precipitation and above-normal temperatures.

“Since about 1990, there has been a really strong warming effect. Since 2000, temperatures are over 2 degrees warmer than the 20th-century average, and the last few years in particular have been the warmest years on record,” Aren said, adding that there has been a 13-percent reduction in the Roaring Fork River streamflow in the 21st century. The lowest-recorded streamflow occurred in 1977, but the 2002, 2012, 2013 and 2018 comprise the next-lowest four years, creating more of a trend than an anomaly.

In response to that news, Town Manager Jay Harrington highlighted the need for Carbondalians to reconsider the future of public spaces’ aesthetic.

“What do we want our town spaces to look like: do they all have to be green?” he posed.

That’s just one broader question in a mosaic of monetary commitments that  the Town has already made to increase its resilience to climate-induced changes regarding water management, ranging from $416,000 for a hydroelectric plant at Nettle Creek to $55,000 for storm water drainage improvements. And like Henry, Harrington, too, is optimistic.

“We’re pretty fortunate: love or hate dams, but to have one upstream that can release down is pretty valuable for us long term. We’re looking at the Roaring Fork and saying, ‘that could be a very major water source,’” he said.

“Our firefighters locally were helping to fight Lake Christine. We were left with a pretty skeleton crew here in Carbondale… we were very vulnerable,” she said. “When you tugged on one piece of it, it was amazing how many threads would get woven out of that.”