Strumming from my heart’s song 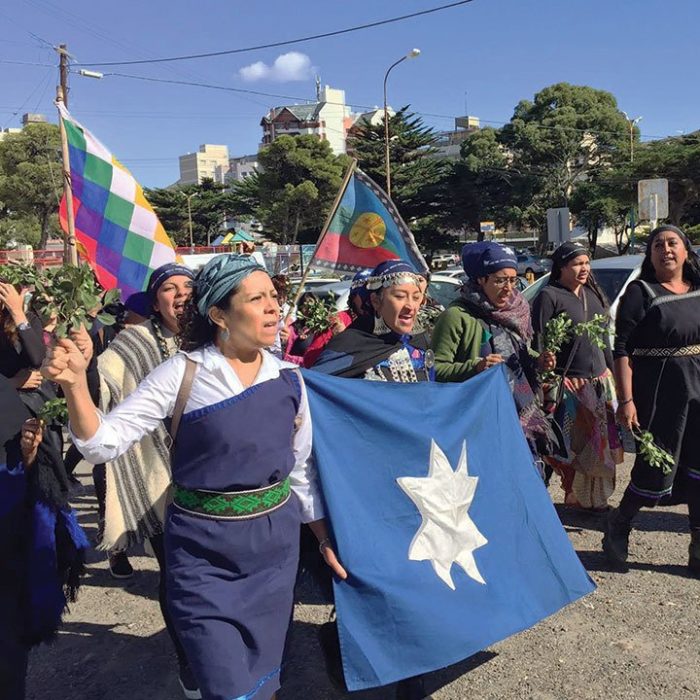 In mid-February, I followed my heart to Southern Argentina, where I met Mapuche Weychafe Moira Millán. Coinciding with the full moon, this was the culmination of a journey that began when I was 16-years-old and a Rotary Club-sponsored exchange student to Chile. The experience broke me open, rattled my core and left a tenacious longing to return. For the next six years, I oriented my life around that return, choosing to study International Affairs so as to sharpen my Spanish skills and deepen my understanding of Latin America.

The subsequent trip was radically different. With no set program, I wandered Chile, Peru, and Argentina, working odd jobs and followed vague leads. I eventually settled into the city of El Bolsón, Argentina for about five months, cooking meals at a hostel and teaching English at a cultural center. A frequent theme for this second journey was the felt relevance of indigenous wisdom, history and culture among young men and women. At a gathering called Raices de la Tierra, hundreds of flower children converged in Chile to share meals, to pray, to play, to attend sweatlodge, and to learn from native leaders of several nations from South, Central and North America.

Despite my previous residency in Chile and university studies, I began this second trip wholly ignorant about the Mapuche. Gradually, I learned more of this nation’s rich history and contemporary struggle for political recognition. The Mapuche co-existed for more than 200 years with the Spanish Empire, defending an independent territory that encompassed most of the Southern Cone, about half of what is Chile and Argentina today. In the late 19th century, inspired in part by the United States of America’s expansion West, the Argentinean and Chilean states severely reduced the Mapuche and other indigenous groups, absorbing their territories.

My most recent expedition was entirely motivated by a desire to learn more about the Mapuche, whose name translates in their language as “People of the Earth.”

I began once again in the sweet and soft hamlet of La Ligua, Chile, where I had been hosted as an exchange student nearly a decade before. Gathering books and speaking with students in the port-city of Valparaíso, I quickly adapted back to South America while honoring friends and family from my first exchange. From there I returned to the vibrant shadows of El Bolsón, Argentina. The present economic crisis in Argentina was tangibly present in most interactions, like a damp veil over bright spirits.

My self-assigned mission brought me to El Bolsón’s Radio FM Alas, where I was able to deliver an aged, yet valued piece of equipment thanks to KDNK’s generosity. For me, the gift was an act of reciprocity. It was Radio FM Alas that ignited within my soul the desire to get involved with community radio. With so many shady occurrences in and around El Bolsón, the voices of FM Alas have played a vital role in defense of the surrounding land and water for over three decades. The radio had also taken a serious hit when their landlord put the building on the market last year.

One day, while visiting FM Alas’s recently constructed, make-shift station, I was asked by a volunteer DJ if I was receiving all that I had set out to achieve. I shared my intention to connect with Mapuche, derived from my desire to take a glimpse outside of Western perception. This volunteer, who had been married to a Mapuche, informed me of a trawün, a gathering, organized by a woman named Moira Millán. The invitation called for international observers and media to accompany Moira from her community to a coastal city. She was seeking absolution before a court, having been accused of coercing a federal judge.

Days later, I boarded an early and infrequent bus, hours from El Bolsón. Although I had written to Moira and received no response, I was determined to follow this lead. Nonetheless, I grew increasingly anxious as the bus rolled for hours along dusty roads, further and further into the unknown countryside. I reassured my self that I had a tent and would adventure my way back to El Bolsón, if necessary.

The bus stopped suddenly and the driver motioned to me the way. Alone, I stepped off and began to walk along the river, gathering littered cans and chewing rosehip. Soon, I came to the sign: “Comunidad Mapuche – Pillañ Mahuiza.”

Pillañ Mahuiza translates roughly as “Sacred Mountain,” also, “Forested Hills of Volcanic Energy,” and according to Mapuche linguist and philosopher Ziley Mora, the word Pillañ implies a strength that arises from the marriage of spirit and soul, the subtle body and the animal self.

Stepping through the gate, I felt perfectly present with my heart. This was the undeniable purpose of my incessant journeying, the place I had been called to inhabit. To my relief, I was immediately met with gracious hospitality. I was treated as a friend among the family of Moira and the volunteers who had been living for months on this land. Among us, there were other journalists, a documentarian and several international observers. We would travel together to Comodoro Rivaldavia, where Moira had to declare herself.

The supposed crime occurred more than a year before, in the wake of Santiago Maldonado’s disappearance. Santiago was 28-years-old, an anarchist, a traveling tattoo-artist, and adamant vegetarian who resonated with Mapuche claims to ancestral lands. In solidarity with Mapuche Community Pu Lof en Resistencia Departamento Cushamen, during a demonstration that was met violently by Argentina’s national police, Santiago disappeared. His lifeless body would reappear, upstream from the clash, 77 days later.

In the time in-between, federal Judge Guido Otranto ordered several raids on nearby Mapuche Communities under the presumption that Santiago might be hiding out. On Sept. 18, 2017, national police arrived by helicopter, before daybreak, to search Lof Vuelta del Río. In the heart of winter, families were forced outside to wait for hours while their homes were ravaged. Members of the community reported being beaten, tortured and detained.

Days later, Moira Millan joined dozens of Mapuche to protest this judge’s order, demanding that he renounce his position. Moira, and only Moira, was accused of “double aggravated coercion” for that action. Gathered in her home, she wished to make clear that her potential imprisonment for up to 4 years, depending on the court’s decision, would be less related to this accusation and more directly a political action to remove her from her community, Pillañ Mahuiza.

Rolling through this valley is the Carrenleufu, whose name in Mapuzungun translates as “Green River.” This thick and rushing source of life has for years been coveted for a hydro-electric project. First proposed in 1994, it would drown an estimated 27,000 acres of forest, including Pillañ Mahuiza. Moira recognizes herself a principal opponent of the project, claiming that not only would it mutilate the river, a sacred, living entity in Mapuche cosmology, but also that the energy generated would be used primarily for extracting nearby minerals and oil.

The story continues at 4 p.m. Thursday, April 11 on KDNK. This and previous programs related to the trip are archived at KDNK.org and available via Apple iTunes, Google Play, and Stitcher by searching “Heartsong.”