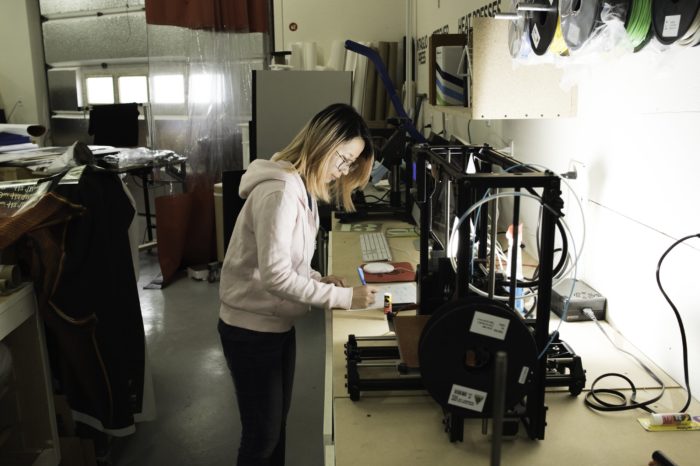 Most construction plans should be wrapped up in time for fall semester, but a hexagonal prototype lab for the Isaacson School officially opens May 2, and it’s already changing the scope of what’s possible for students.

It’s the second iteration of the protolab, a workshop space where Isaacson School of students can create tangible expressions of their digital ideas, whether it’s screenprinting a Tshirt or 3D printing a model for Sopris Theatre’s next set design.

Graphic Design Program Coordinator Brian Tinker has worked doggedly since moving into the new lab in December last year to cultivate an ideal space for both students and tools.

“You gotta try to cram a lot of stuff into a space and keep in mind it’s an instructional space,” Tinker, who is also a digital media professor, said. “We’ve got to be able to teach people how to use it, and that involves using the space in a little bit different way.”

Tinker estimates the new prototype lab boasts about 3,000 square feet — a 200-percent increase from the previous location, which the program first moved into in September 2017.

“There’s a stitcher there,” he said, gesturing. “Because of course if you make a banner, you have to stitch the edges, and so our students learn far more skills than they might have learned in a traditional graphic design class.”

And even though the new prototype lab isn’t even technically open yet, Tinker is already accounting for housing future tools in his layout.

“Who knows what equipment will come out in the future?” he posited. “So we want to leave ourselves some room for what we’re going to do down the road — we don’t know yet.”

As for right now, students are already evolving with the new space.

“Radio CMC went through a change, and part of that change was because they were in the prototype lab,” Martin said, noting that listenership was relatively low and creating year-round content when students were out of town during breaks proved challenging, as well.

Rather than succumb to discouragement, he continued, the Radio CMC students rebranded to CMC Live.

“What they’d seen was when they podcasted, they got a lot of students to download it,” he said. “So they kind of said, ‘Well, how do we take the leadership in developing this new idea of podcasting, build that out so we can still make content [and] not be quite as tied to that 24/7-we-have-to-broadcast-all-the-time [schedule]?’”

The answer, they decided, was to rebrand and shift platforms. The recording studio in the new prototype lab allows exactly that.

“It’s been really cool because they’re really pushing some of our own limits,” Martin said. “This is kind of their space — and you’ll notice some of the things they have: they can do a podcast, but they can also put these cameras up and go live out to Twitch … where they can do a live video podcast. They’re just starting on that because it’s pretty new technology.”

In addition to Radio CMC becoming CMC Live, the prototype lab has also already fostered deeper partnerships within the school and surrounding community. For instance, while Isaacson School students have always designed Sopris Theatre production posters, programs and advertisements, the protolab has created a capacity to help with set design and props, too.

“We just cleaned up their sawdust yesterday,” Tinker laughed. “We 3D printed the cornish game hens, so that was just one example of the way we were able to use this space. We’re always looking at ways that we can work with them and help them, and I suspect they’re going to get deeper and deeper into using 3D software for set design.”

And while livestreaming graduation is already an in-curriculum project, Martin sees opportunities for CMC Live to continue expanding its broadcasting beyond the classroom — such as its current PBS project on “The Tank” in Rangely.