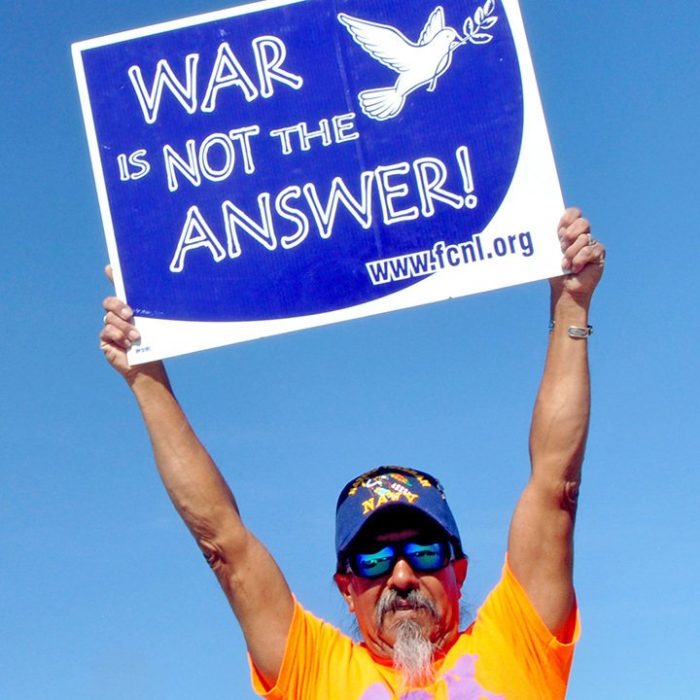 The desert was blooming. Looking out at the eternal horizon, we saw flowers, not bombs. In fact, other than the ominous blue and red lights from the police cruisers and a black and white sign warning against trespassing, there was little evidence of the Nevada National Security Site.

Even the police presence turned out to be less ominous than could have been reasonably assumed. Nye County Lieutenant Chris Jordan was downright happy to see us, even joining the protesters’ breakfast on Good Friday — an odd sort of breakfast club, given that Jordan would undoubtedly be arresting several of them later that day.

It’s a contention that reflected so much of the experience well. Amy Hadden Marsh had invited me to join her in covering the annual Nevada Desert Experience (NDE) Sacred Peace Walk, a weeklong march that culminates at the Nevada National Security Site, shortly after protesting outside Creech Airforce Base. In a few short days, we spoke with dozens of people, from Western Shoshone Council members to Catholic Worker representatives who had joined the protest to a Desert Research Institute (DRI) archaeologist in Las Vegas — and yes, to the police.

First-timer and Catholic Worker from Los Angeles David Harris spoke at length about his own contentious relationship with land and country. For him, it seemed fitting that walkers sang “This Land” around their first campfire outside Creech.

“This black narrative about land — not about ownership, not even about naturalization — has always used the land in the same way the indigenous people to the Americas use land,” he said, noting his own Ethiopian-American identity. “I think the black narrative is not one of ownership or one of its usage but one of being forced to till it for someone else’s gain.”

That felt particularly poignant sitting on Shoshone land, having been granted a Shoshone permit to be on that land, contemplating willfully getting arrested to protest the United States Department of Energy “tilling” the land via nuclear testing, he continued.

“The United States seems to be the hired hand for the globe, so if we’re making all our money off of military warfare, that basis is just a way for people to practice in a great cash transaction of getting us to do something that we shouldn’t be doing,” he said.

While the Peace Walk was Harris’s first foray into organized activism, many in the group had decades invested in political action — for them, it was a lifestyle.

Ted Thomas chuckled when thinking about his own arrest record. He was a 19-year-old street performer in New Orleans when he decided to join the Great Peace Peace March for Global Nuclear Disarmament in 1986.

“I’m on a date, and it comes up jokingly: Have you ever been arrested? Sixty-four times,” he laughed. “I was in San Francisco with Food Not Bombs, and … I got arrested every day for a few weeks. It was just a cite and release, but it racked up the numbers.”

James Knight was also part of that cross-country march in 1986. More than 30 years later, he and Thomas still walk together, and many of his closest friends today share that history, he noted. When that walk concluded, “re-entry into civilian life” proved jarring for many — so much so that three protesters died by suicide afterward.

Breakfast with the police who would later arrest you for trespassing and relating to veterans’ perspectives while protesting an airforce base are par for the course in these activists’ lives. Their commitment to nonviolence is formalized — NDE even insists that participants sign a statement that includes nonaggression toward law enforcement — and their walk includes as much spiritual grounding exercises and prayer as it does protest.

And that was the common theme among everyone: a longing for community. When protesting daunting issues like nuclearization and drone warfare and climate change, it can feel a bit like shouting into the void, they all agreed. But with enough voices, perhaps they’ll create an echo.