Kid-organized event reminds everyone to ‘be you’ 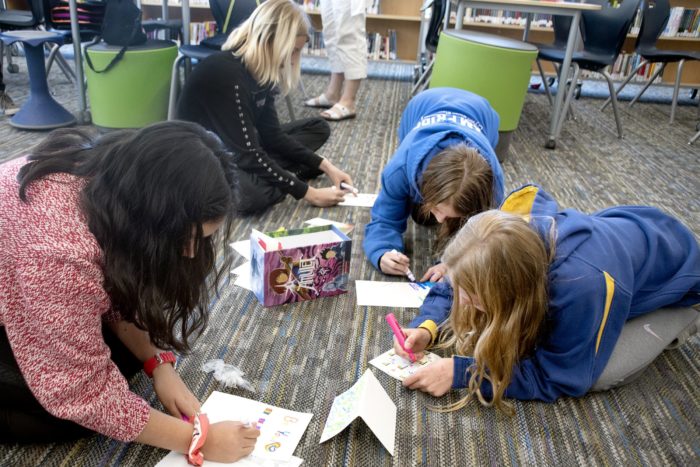 Carbondale’s first pride parade is slated for the First Friday in May and it’s all thanks to a group of middle schoolers.

It’s actually the second year that Carbondale Middle School has had a GSA — which can stand for Gay Straight Alliance or Genders and Sexualities Alliance. Such organizations are common at high schools around the country, but no other local middle schools had one until a student approached Library Aide Lorri Knaus.

With less than a dozen members, the most significant event that first year was attending the Western Slope GSA conference.

“We were definitely the youngest group there,” Knaus recalled. “I’m an ally, and that’s basically all I know how to do. I’m still learning.”

This year, student involvement has grown and Knaus enlisted the help of Yuen, a prevention specialist at the school.

“LGBTQ people are the highest risk and least likely to reach out,” Yuen noted. “In the broader sense, we’re really about friendship and acceptance. I want our kids to be inclusive and understanding.”

That seems to be happening naturally. At a recent meeting, one student shared a poem that posed a question. “If I can’t be myself, then who am I?” it read. “If I’m someone else, then the world is a boring, one person planet.”

Another simply expressed enthusiasm in being part of something that was open and welcoming to all, noting that, “some people might be afraid to share their identity, and this lets them know they’re safe.”

The group has already sponsored a dance and conducted a penny war to put money in its coffers, which has also raised its profile. While a few parents had questions  — mostly regarding whether the lunchtime library group might be tackling issues better left to health class, which Knaus says isn’t the case — many more have expressed support. With that kind of backing, the sponsors couldn’t see any reason not to move ahead when the students proposed a parade.

True Nature Healing Arts will host a pre-parade party from 3:30 to 5 p.m. on May 3, with face painting, sign making and a drum circle. The parade itself takes off from the corner of Weant and Main at 5:30 p.m. and will head down Main Street to the Fourth Street Plaza, where the annual Family Block Party Celebration will already be underway. The GSA will have a booth there and T-shirts with the group’s “Be You” motto, and other organizers will have a presence as well.

In addition to contributing financial support, Aspen Out is sending the giant rainbow flag usually reserved for its Gay Ski Week fundraiser.

Noted Executive Director Kevin McManamon, “It’s half a block long and the parade route is only three blocks. It’s going to be a lot of fun.”

Aspen Out backs a wide array of local GSA programming, including an alternative prom slated for this weekend in Carbondale, and helped found PFlag Roaring Fork, which supports parents who may have a child questioning their gender identity or sexuality. Also participating in the event is the local chapter of Gay for Good, which is co-sponsoring the Fryingpan River Clean-Up this weekend.

But while there are numerous LGBTQ resources for all ages in the area, McManamon is particularly excited by energy at CMS.

“They’re doing an amazing job. They’re super strong. It’s amazing what they’ve been able to accomplish in a short time,” he said. “For this to come out of the middle school — I think the entire community should be proud.”