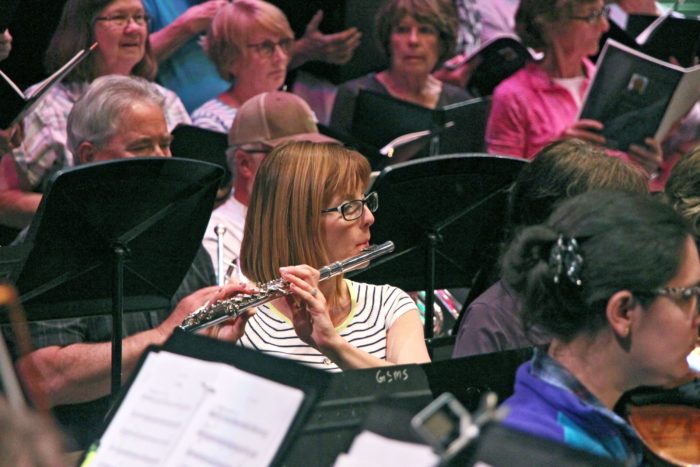 “It’s one of the greatest things that ever happened. It should have happened a long time ago.” That is how Wendy Larson, of High Country Sinfonia, described the first-time collaboration between four local music organizations: the Aspen Choral Society, Symphony in the Valley, High Country Sinfonia, and the Maroon Bel Canto Choirs Program.

Three performances of “Music That Connects Us” will be presented over Mother’s Day weekend in Aspen, Rifle, and Glenwood Springs. The series will be conducted by Paul Dankers, music director for the Aspen Choral Society, Kelly Thompson, music director for Symphony in the Valley, and Wendy Larson, coordinator of High Country Sinfonia.

The collaboration came about through a series of events that began with Stephanie Askew, jazz and classical vocalist and co-owner of the Redstone Art Gallery, and Dankers brainstorming different ideas. Askew suggested to Dankers that the Aspen Choral Society and Symphony in the Valley should do something together.

After last spring’s Aspen Choral Society concert, Dankers thought about the idea more seriously and contacted Thompson and others from Symphony in the Valley. Dankers and Larson had worked together before, and Dankers asked Larson to involve High Country Sinfonia. The project lent itself to adding more string players, as Larson described, “to give the orchestra more of a rounded out feeling, to provide a more lush sound.”

Larson explained, “To perform large choral works you need an orchestra.” She adds, “I know it’s way over 100 people that are going to be performing at this concert, which is a celebration in itself. And we have such a wonderful community and people that are willing to give up their time and volunteer to perform music.”

Bringing together the four organizations was no small task and the end result should prove to be a special event for both participants and attendees.

The concert begins with Symphony in the Valley, conducted by Larson and Thompson, performing English composer William Walton’s coronation march, “Crown Imperial.” The recessional piece was performed at the 2011 wedding of Prince William and Kate Middleton.

Then Wendy Larson will conduct High Country Sinfonia for Beethoven’s “Egmont Overture” and Aaron Copland’s Variations on a Shaker Melody from “Appalachian Spring.”

Larson, who is also a cellist, brings a unique perspective due to her tenure with all three organizations — even performing in each group’s first concert. She is the founder of High Country Sinfonia, a group of professional and semi-professional string players, which began in 2015.

Dankers and Thompson choose selections from John Rutter’s repertoire for the concert finale, which will include the choir performing Rutter’s “All Things Bright and Beautiful” and “Mass of the Children.” Thompson described the work as, “an incredibly challenging piece, but a very beautiful piece.”

Dankers said of Rutter’s music, “What Andrew Lloyd Webber did for the [resurgence of the] musical theatre scene, John Rutter did for the choir scene. He wrote this wonderful choir music that was beautiful and had strong and interesting rhythms.”

Dankers noted, “This is really the perfect way to spend a Mother’s Day.” He added, “If families are looking for a way to honor their mothers, take them out for lunch, and then take them to this beautiful concert and let them enjoy this beautiful music with their families around them.”

“Music That Connects Us” tickets are $20 at the door or $15 in advance online at the sitv.org or aspenchoralsociety.org websites.

7 p.m. Friday May 10 at Harris Concert Hall in Aspen

4 p.m.  Sunday, May 12 at the Glenwood Springs High School Auditorium