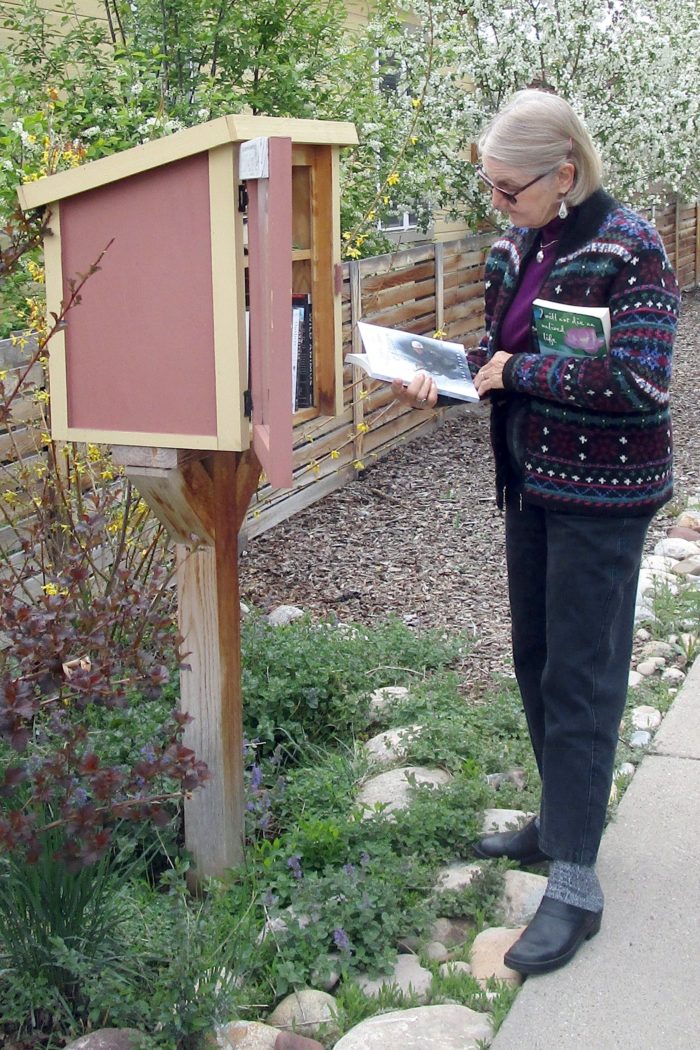 On my way to Denver for the weekend, my last stop was the Little Free Library on Eighth Street.

I don’t know how long it’s been there. I noticed when I was helping members of my congregation purchase a parsonage on Cleveland Place. At first I thought it was a birdhouse on a pole, but a closer look revealed a small roofed house with glass doors. It was stuffed with books and bore a sign reading, “Take a book. Leave a book.”

When I picked up climber Margo Talbots’s memoire, “All That Glitters” last Friday, I began to wonder about the origins of the library on a stick. I learned online that the Little Free Library movement is celebrating its 10th anniversary over the weekend of May 17. Folks across the country are being invited to visit Little Free Libraries, snap photos and share them on social media.

I haven’t (yet) learned who built Carbondale’s Little Free Library on Eighth, but hats off and a big thank you to him or her. And thanks to the civic soul who built Carbondale’s other one, which Crystal Holsinger tells me is located “at the cul-de-sac end of Oak Run.” Crystal’s daughters love picking up books, and the family has a rule that “if we bring one home, we have to take two to add to the box.”

My Denver friend Flo Phillips says there’s a well-used Little Library in her apartment complex. Sarah Rankin Gordon, who now lives in Glenwood Springs, says they’re all over Portland. Because Sarah’s first baby would nap only in a stroller, Sarah would “plan our stroller naps around where the Little Free Libraries were located.”

Photographer Julie Albrecht – who I miss sorely since she moved from Carbondale to Green Bay Wisconsin, says she’s seen one in the L.H. Barkhausen Nature preserve north of town as well as others within the town. A Little Free Library even turned up in the background of a photo Julie took in Bellevue, Wisconsin.

It’s not surprising that Julie has found so many installations; Little Free Libraries started in Wisconsin. The first one was built in 2009 in Hudson, Wisconsin, by Todd H. Bol. Todd built the inaugural Little Free Library (LFL) in honor of his mother, a schoolteacher and lifelong reader. After placing the glassed-in book house in his front yard, Todd Bol gave 30 Little Free Libraries away to friends and family. The “take a book, share a book” concept resonated, and in 2012, Bol partnered with Rick Brooks to co-found the Little Free Library nonprofit.

Bol served as the organization’s executive director until his death in October 2018. But the movement Bol started is thriving: more than 80,000 Little Free Libraries have been built in all 50 states and countries as distant as the Netherlands, Brazil, Japan, Australia, Ghana and Pakistan. The Library of Congress, the National Book Foundation, Library Journal and the Women’s National Book Association and many other bibliophilic organizations have honored Little Free Libraries.

The Little Free Library’s website (LittleFreeLibrary.org) includes a map that shows registered Little Free Libraries worldwide. It places a marker on Carbondale, and another on the west side of Marble. The Carbondale marker indicates one library on Eighth Street; the Oak Run library isn’t shown.

That might be because the Oak Run LFL isn’t registered. Anyone can start a Little Free Library: you can buy a ready-made library, assemble one from a kit (about $250) or build one from scratch. Kits, plans and building videos are all online. The Little Free Library foundation asks only that the library be placed in a legal spot where passers-by will see it, and that someone act as its caretaker. They also request (but don’t demand) that you register your library with the LFL foundation.

Founder Todd Bol said that he really believed “in a Little Free Library on every block and a book in every hand,” adding, “I believe people can fix their neighborhoods, fix their communities, develop systems of sharing, learn from each other, and see that they have a better place on this planet to live.”

It’s love on a stick, and plenty of Bonedalians share that vision. Local artist Debbie Johnson-Hill, owner of DJ’s on Main, says she’s ordering a Little Free Library this month. Hopefully, she will share its location with The Sopris Sun so the paper can run a photo of it.