Being present — the life of a fly fishing guide 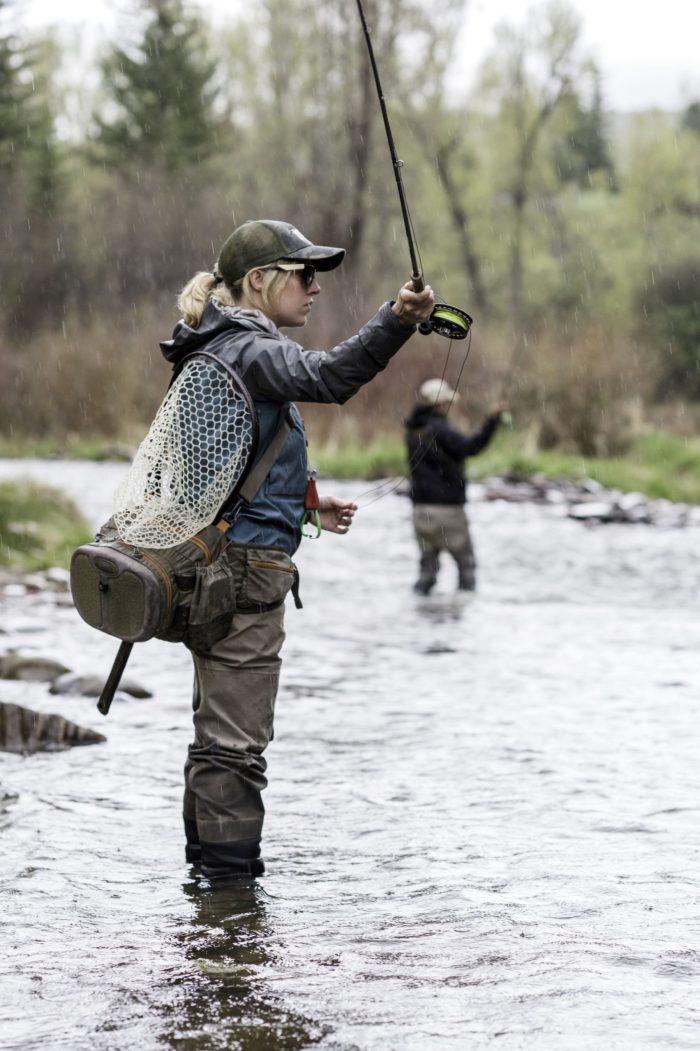 Raindrops splatter on the water surface and the soft bounce of the bobber skimming along with the ribboning flow. At first, you are aware of the other people
fishing in these same waters. Keeping your breathing steady and even, you get your weight evenly distributed with your feet nestled into a flat place between the river bottom rocks. Your focus hones in on the bank across the river. You cast the line out and with its release go some of your cares and woes.

If it’s just for a few hours or the day here on the Roaring Fork River, and the other world you inhabit every day may as well be a million miles away. For this moment, you are here and nowhere else. Present.

Fly fishing guides Flinn Pomeroy and Matt Selig will tell you this is a common experience amongst their clients.

As Selig described it, “I have had many clients tell me, ‘the last four hours, I just haven’t thought about anything.’ And I think that’s why they continue to come back just because they can get four hours or a full day of stress-free fly fishing.” He added, “I promote to them to leave their cell phone in their car, to check out of their everyday world for a few hours.”

In a world where so many are disconnected from nature, the experience of a fly fishing trip can rekindle one’s sense of wonder and spark an awareness of the beauty of nature’s surroundings.

Pomeroy said, “I always tell people, if it’s a tough day, the fishing’s hard, we’re not catching a whole bunch of them, just like look up, look where you are. You’re in a moving postcard. It doesn’t get any prettier than this.” She added, “So if anything, you’re not at the office, your phone isn’t ringing; your feet are in the river. This is what it’s all about.”

The road to the river

Pomeroy and Selig became guides through different routes but ended at the same rivers of the Roaring Fork Valley. Both Pomeroy and Selig work out of Aspen Outfitting Company, where Jarrod Hollinger is owner and operations manager.

Jon Hollinger, Jarrod’s father, started Aspen Outfitting in 1969. The elder Hollinger died in March of this year and as Jarrod said of his father and the family business, “I saw the fulfillment my dad got from guiding people and sharing our beautiful surroundings with the visitors that come to the area. I think it was one of his biggest motivations, and some of his biggest fulfillment came from that.”

The Roaring Fork River is a freestone (undammed) river, with its water system fed by rainfall and snowmelt. The river is entirely dependent upon these natural water supplies.

People come from all over the world to fish these waters, some experienced in fly fishing and some not.

Selig told of guiding former United States Representative Gabby Giffords and her husband former NASA astronaut Mark Kelly on an outing. He recalled, “Their experiences are so much bigger than mine in life, but they hadn’t experienced fly fishing and so sharing that with them was great.”

Selig has a master’s degree in special education and has worked with children and adults with disabilities, including in northern Colorado with the Special Olympics. He serves as an ambassador for Brown’s Fish for Change non-profit, an international fly fishing program for students to carry out local initiatives, including mangrove restoration in Guanaja, Honduras.

His ‘day job’ is as a residential manager for Ascendigo Autism Services and also guides for the Crystal Fly Shop in Carbondale. In 2018, he founded the non-profit, Colorado Adaptive Angler, to provide angling opportunities to people with disabilities.

Pomeroy grew up in Catonsville, Maryland where she followed her first passion—music. At a young age, she learned piano and then taught herself guitar. After graduating from the Berklee College of Music in Boston, and moved to Nashville where she spent time on Music Row, writing country and folk music, playing and touring. But she said that life wore her down.

At age 26, Pomeroy moved to Brooklyn, to be closer to her sister. She worked at an upscale bar and traveled as much as she could to fish. She wanted to guide so she started putting her name out there and got a call from Aspen Outfitting asking her if she would lead a trip.

Pomeroy admits to having some trepidation, as she described, “I was a little worried about turning a second passion into a profession. But this has been such a different experience because you’re one-on-one with people on the river, sharing that passion … and it’s returned to you tenfold when they’re catching fish.  And they are appreciating the rivers and the atmosphere and the experience.”

She is also a local lead mentor for a national non-profit, The Mayfly Project, which mentors children in foster care through fly fishing. Last summer she raised funds for Mayfly through Wednesday evening fly fishing classes for women. Aspen Outfitting provided rods and reels, boots, waders, and flies. The class was free, with suggested donations, which then went to the Roaring Fork installment of The Mayfly Project.

Pomeroy said of Hollinger, “Jared has been my biggest supporter. He was the one who allowed me to do that [women’s fly fishing] class all summer, and he volunteered for the Mayfly Project as a mentor as well.”

According to Pomeroy, there are a handful of women guides in the Roaring Fork Valley, but their numbers are increasing as more women get into the sport. Pomeroy reflected, “I think that I expected to have a little more confused reaction when clients see me in the shop, but people are so open and so willing just to get out there on the river with me. The judgment isn’t there.” She added, “I’ve never had anyone say or do anything that made me feel like I wasn’t where I was supposed to be.”

In Colorado, you do not have to be licensed to be a fly fishing guide; however, guides are trained and certified in tools essential to the trade, such as swift water rescue, CPR and First Aid, and Wilderness First Responder.

A guide is ever vigilant and aware of their surroundings when negotiating quick changes in weather patterns and, at times, fast-moving rivers. Selig emphasized safety is first and foremost as, “We take every turn as if it could be our last. My job is to get them [the client] back to the people that care about them. You have to know when danger is coming.”

Guides here have a tight-knit group. Pomeroy said that Aspen Outfitting is a respectful and non-competitive guiding community. When I asked Hollinger how he fostered that work environment, he said, “I have the opportunity as a small business owner to build a business that I would want to work for.  And to build a business that reflects who I am and how I approach things.” He added that pairs perfectly with how most guides approach their work as, “they obviously love what they do, they love where they live, and they love sharing that with a guest.”

Another aspect important to guides is the state of our environment. When asked about the future of the fly fishing industry, Selig said, “I have concerns about overuse in Colorado. I continue to go to trailheads and my favorite places, and find people have trashed areas.” Selig said part of the solution is “educating our children about how to take care of them… and that’s my duty to my own kids.” He finished with this thought: “Not to be all doom and peril, but our rivers are doomed without people to protect them. So where fly fishing is going is we are the protectors of the rivers, and we are the people who will go to bat for them. We are trying to create new generations of protectors who take care of resources.”