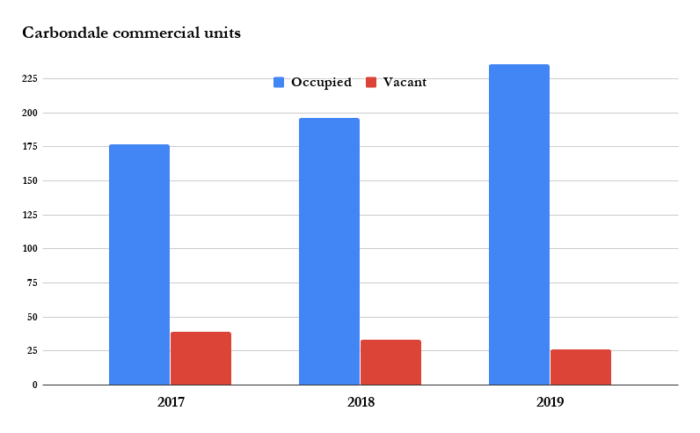 Carbondale is home to more businesses and has fewer vacant commercial units, according to The Sopris Sun’s third annual inventory.

In June 2017, our inaugural attempt to peer into every shop window in town turned up 306 active stores, restaurants, offices and manufactures, with 39 sites for potential expansion. The ratio was 342 to 33 at the same time in 2018, and that trend has only continued with 398 occupied and 26 vacant spaces this year — a 94 percent occupancy rate.

As a caveat, our method isn’t exactly scientific. We have worked hard to use similar criteria: we don’t include government buildings, stick to city limits, count each business only once even if it has multiple locations and treat multiple adjacent vacant units as a single space. But it’s still just myself, staffers and board members walking around town taking notes. The Town tracks sales tax licenses, the Chamber of Commerce tracks its own members and realtors know their own inventory, and this is our best attempt to bring it all together.

One of the perks of the pounding-the-pavement approach is the chance to look beyond the numbers at the trends.

I have self-assigned myself the Main Street section all three years, and the transformation is palpable. The stretch between Second and Third was really struggling in 2017 and still had some vacant storefronts in 2018. Now, it’s as vibrant a block as any in town — and a microcosm of some of the larger trends. Izakaya is just one of several restaurants to have debuted since this time last year and seems to be thriving. CoVenture not only occupies the ground floor of its building, but has found uses for all the little nooks and crannies upstairs, as well as space vacated by Timbers Resorts before it moved and then pulled out entirely.

Indeed, an interesting dichotomy of subdivision and expansion is taking place across town, as Chamber Director Andrea Stewart observed.

“I feel like we’re seeing more businesses that want a desk and a door — a professional space outside the home,” she said. “I’ve also seen other businesses growing and expanding.”

She cited Axkawa as a prime example, with Señor Taco taking over adjacent property to become something else. Sopris Engineering has similarly expanded into open units in the Centennial Building, which is apparently without vacancy for the first time in a while. The same is true across the street in the Dinkel Building — one of the oldest commercial complexes in town — with a mix of large and small tenants tucked into all the offices upstairs as well as the shops on the street.

“When people come in we always ask ‘how’s business’, and I feel like the vibe is very positive,” Stewart said. “When everyone works toward a common goal, we see results. Carbondale is becoming the destination rather than a stop along the way.”

The only downside to all the growth is that the residential population may not be keeping up.

“There’s not a lot of vacancy, but those businesses that are open are struggling to hire employees — particularly in the food industry,” Stewart said.

As problems go, it’s a good one.

For more than a decade, some have seen brick-and-mortar businesses as under imminent threat from the internet. But in Carbondale, at least, it’s thriving — and even Amazon and its ilk is paying their share, to Finance Director Renae Gustine’s delight. Coupled with local commercial success, it’s looking like a solid financial year for Carbondale, with a positive audit just presented and six-month sales tax figures going before the board in July.