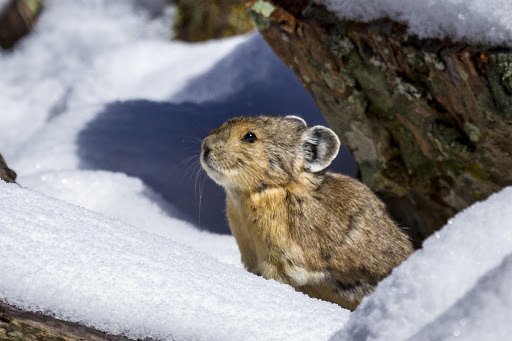 Pika fans get ready to rally! A unique opportunity to study and collect data on the American pika and its changing habitat is coming to Carbondale on July 31 at the Third Street Center.

Hosted by the Front Range Pika Project (FRPP), a citizen scientist volunteer program, a two-day training program will be available for locals to learn more about how climate change is impacting this high alpine mammal.

In recent years scientists have noticed the disappearance of the pika from areas across the western United States that historically housed this small, yet personable relative of the rabbit and hare. Research has linked this disappearance to rising temperatures, reduced snowpack, lack of vegetation.

According to Megan Mueller, co-director of FRPP, scientists believe that if this trend continues, the American pika could be extinct by 2100.

The pika has drawn interest from scientists for a variety of reasons. For one, they are able to survive in extreme, sub-zero conditions due to a thick, insulating coat and resting body temperature of about 104˚ F. For added insulation, they burrow underneath the mountain’s snowpack. Second, unlike many other mountain species, the pika does not migrate or hibernate. Instead it seeks refuge from the hot summer temperatures in talus fields under rocks with ice or water.

Unfortunately, dramatically rising temperatures are starting to impact where and how the pika can survive.

Mueller notes that the “snow is melting about one to four weeks earlier than usual [in the Rocky Mountains]. Since pikas do not hibernate, they need the snowpack for insulation and there is a concern the pika could get too cold and freeze to death.”

Additionally, since pikas are so heat sensitive, prolonged temperatures above 80˚ F can cause chronic heat stress, according to Mueller.

This change in temperature is also impacting the vegetation and nutrients available to the pika thus making it difficult to gather and store food over the winter months.

Due to the pika’s changing habitat and dwindling numbers, scientists are now starting to identify the pika as an “indicator species”. This means that the data collected on the pika is helping scientists learn more about possible changes to other species and plants in the high alpine ecosystem.

“The Canada lynx is another species that needs the snowpack in the spring” according to Mueller, “the more we find out about the pika, the more we learn about other species.”

Back in 2010, despite the growing disappearance of the American pika, the U.S. Fish and Wildlife Service decided against putting the American pika on the Endangered Species list. Mueller believes this is due to the remoteness of the pika’s habitat.

“There is a small group of surveyors and researchers working in a short window of time. Sometimes it can take a whole day to do one survey.” Mueller notes.

In order to address this information gap, the Pika Project, created and managed by the Denver Zoo and Rocky Mountain Wild, has begun rallying the public to take action by working with the citizen scientist volunteer program.

Citizen scientists are locals who are trained to spot, identify, and collect data on pikas. Using the same survey method as trained professionals, citizen scientists will learn about the pika’s distinct call and body features, food stores, and ecosystem, and the equipment necessary to collect information. Land management agencies will be using the collected data as official documentation for pika conservation.

Needless to say, the surveys conducted by the citizen scientists are crucial for gathering as much information as possible in a short amount of time.

Mueller has been deeply inspired by the nearly 400 citizen scientists throughout Colorado.

“Interacting with people who care about climate change inspire me to do more in my personal life. I get to learn more from others and see their viewpoints.” Mueller gushes, “[Our volunteers] are doing great work with limited resources [that] contribute to management agencies”.

To become a citizen scientists, it important that volunteers attend both the classroom and field trainings. Minors must be 12 years of age and accompanied by a parent or guardian. Both trainings are free of charge and food and beverages provided.

Can’t make a training, but want to get involved with surveying? Mueller said the FRPP is currently working on a cell phone application that will enable hikers to record pika observations in the field, which should be ready by August and requires no training. Mueller also encourages the public to stay involved as much as possible by writing to your government officials, considering your commute, and taking action to reduce your carbon footprint.

More info and registration at pikapartners.org.