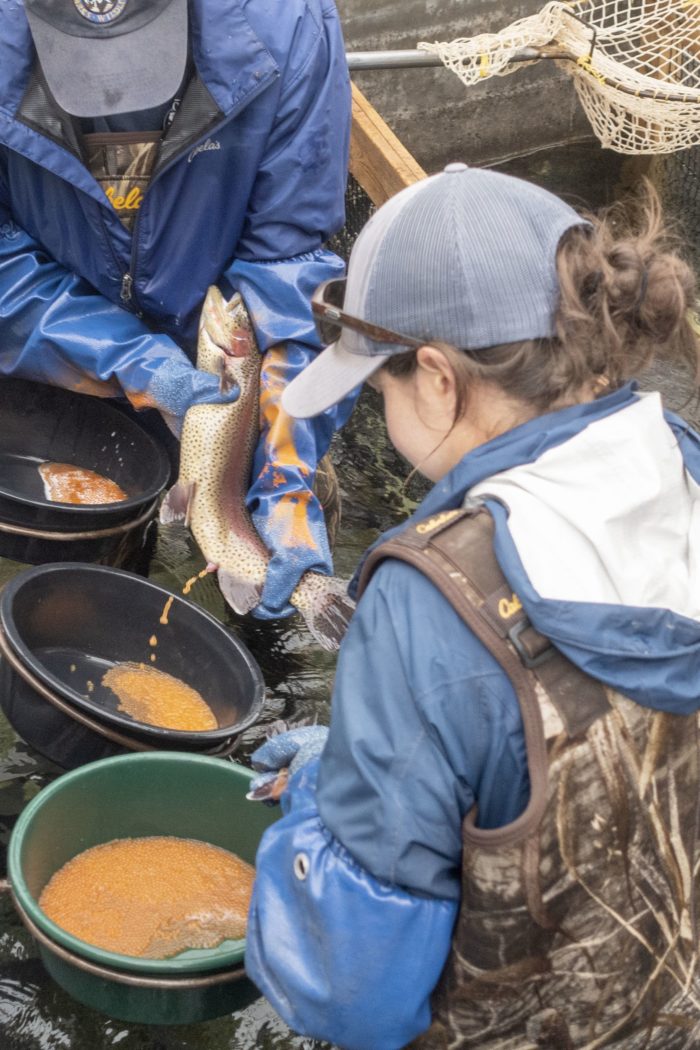 If a child asks you where fish come from, just point to the Crystal River Hatchery on Highway 133 and say, “Over there.”

When you arrive, you’ll be warmly greeted by Robert Streater, manager of Colorado’s flagship hatchery since 2008.

“We’re at the beginning of the trout’s life cycle,” Streater explained, “Our adult brood fish produce over eight million trout eggs yearly which we distribute to other hatcheries around the state.” The process of fish producing offspring is called “spawning.”

Built in 1941, the Hatchery regularly hosts visitors and school groups. Recently, a Basalt High School (BHS) class from came to learn what goes on here.

Led by science teacher Leigh Edlind, the students watched intently as Hatchery Technician Rick Samora explained the process.He said that the other CPW locations then hatch the eggs, raise the “fry,” as the tiny fish are called, to various sizes depending on the needs of Colorado’s 6,000 miles of streams and 1,300 lakes and reservoirs.

Edlind noted the group came to the Hatchery as part of the statewide non-profit River Watch program and the BHS River Ecology class. “We’re looking at the ecology from plants to insects to fish. The students record data from local rivers on hardness, oxygen and other aspects.”

She added that the students report back to Colorado Parks and Wildlife (CPW), which supervises the state’s 19 hatcheries.

Samira Reinstar, a sophomore at BHS, said “I am very interested in how things work around here and also that the fish are handled humanely.”

This process, called “stocking,” help keep the state’s fishing opportunities robust and also aids the survival of native fish. The fish are only released for recreational uses. No commercial operations are included, but privately-owned sport fishing locations may be.

“We run a very safe and secure operation,” Streater emphasized. “The water for the fish comes only from our own wells. This avoids fish disease contamination.”

Bio security is a top priority. The Hatchery is manned 24 hours a day, seven days a week, year-round by Streater and the three other staff technicians who all live on the property.

A cold water facility, the Crystal River Hatchery keeps the temperature at a moderate 52 degrees, providing an optimal environment for the mature fish to reproduce. The Hatchery generates eggs for two trout species: Rainbow and Snake River Cutthroat. These varieties do well together, even cross breeding in the wild. The Hatchery can facilitate the process.

Rainbow trout, although not native to Colorado, are selected for release because they thrive in the state. They are successful hatchery-raised fish: They take lures readily, fight vigorously and taste good. That makes them a very popular sport fish. Most of fish released are about 10 inches long. But, as a boon to anglers, 20-inch fish may be added.

CPW recognizes licensed anglers who catch exceptionally large fish through its awards and records programs. The state records by weight policy tracks the heaviest fish caught from each of the 38 different species found in Colorado.

When you visit the Hatchery, remember to look for the “Feed the Fish” food dispensers – quarters required.

Adult annual fishing licenses cover from April 1 to March 31 of each year. But, hey, if you are under age 16, you can fish for free!