Nestler leaves on a sweet note 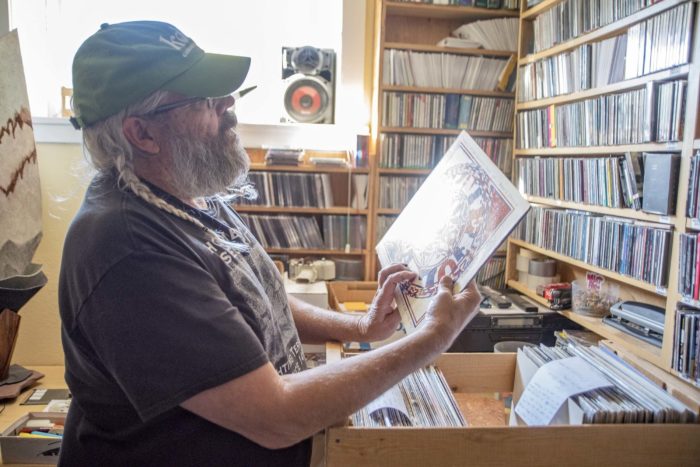 Luke Nestler, KDNK Music Director, says his time at the station has “always felt like a calling, more than anything. And that’s what’s kept me going for 15 years.”

He began as a volunteer DJ in 1989 and has been a paid staff member since 2004, making his 15-year tenure the longest of any staffer in KDNK history.

Nestler decided it fitting that his last day as the station’s music director would be the KDNK Record Sale at Potato Day on Sat, Oct 5 from 9 a.m. to 3 p.m. in Sopris Park.

He will continue his musical DJ duties on Wednesdays from 2 to 4 p.m., followed by, during football season, Bronco Babble — a confessional of all things good, bad, and ugly with Denver Broncos football, along with co-hosts Jane Bachrach and David Briscoe.

Nestler was born in Grand Junction and was five years old when his father died. That is when Nestler, his mother, and sister moved to Boulder, where his maternal grandparents lived. He would graduate from high school in 1974  and go to college in Durango as an English major. He quit with one semester left, a decision he now calls “the stupidest thing I ever did.”

He moved to the Roaring Fork Valley in 1979, when his mother was living in Glenwood Springs and lived for 19 years on a mining claim on the backside of Aspen Mountain in a tipi. He reminisces how John Denver’s music and lyrics captured the essence of a Colorado he knows, loves, and sometimes misses, saying “When he talks about [in “Back Home Again”], ‘there’s a storm across the valley,’ all that stuff, I lived it. It was right there. And I guess that’s why I cry sometimes when I hear that because that ain’t happening anymore. That stuff doesn’t happen. You have to go to Idaho or Montana, or maybe Nevada or something.”

The ongoing operations of KDNK, with close to 1,300 members and over 100 DJs, requires a lot of detailed behind-the-scenes work.

The nature of the radio business has changed greatly over recent years, and as Nestler says, “Everything’s moving too fast. And that’s actually one reason why I’m quitting because this place gets very hectic sometimes.”

Nestler told one story that demonstrates the intimate connection of radio: “We got a call one membership drive from a lady who was sitting with her dying mother, and they were listening to KDNK. They were listening to Minnie Moon, the daughter of Amy Kimberly at Carbondale Arts. Amy’s daughter was doing a show, and she was playing Frank Sinatra. This woman called and said, ‘I’d like to pledge my support to your radio station because you’re playing the music that my mother grew up with.’ And she explained that her mother was dying and that it meant a lot to her to turn on the radio and hear Frank Sinatra coming out of the speakers. That’s a beautiful thing. It’s goosebump radio.”

Cody Lee will take over the musical director’s duties. As Nestler says, “The great thing about Cody is that he has got such an even-keel; he’s one of those people that everybody loves.” He is confident handing the baton over to Lee, “because he’s a great guy. And he definitely knows his music — all kinds.”

One of his last duties is sorting through stacks of vinyl albums and CDs to be sold at this weekend’s record sale. The event, ever-popular with devout vinyl collectors, is in its 30th year and is a fundraiser for KDNK. The station receives many record donations, from which they add to their music library, then the remainder is sold. Last year’s sale raised almost $1,800. Not too shabby when you consider the vinyl records and CDs are sold at $1 and $3 a pop.

Nestler plans to take a one-year break from the hubbub and ease himself into a natural harmony at home. He says, “I live on the Roaring Fork River and I have a really nice grassy beach where we live. I just want to sit by the river and listen to the river sing its sweet song.”