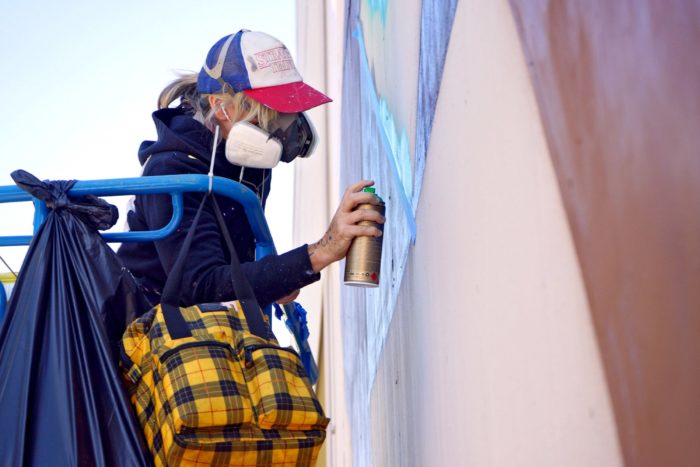 Two children from the Mountain Momma Preschool stood in the small park at Fourth and Main streets staring at the side of a building where muralist Bunnie Reiss had painted a two-story-tall hoofed animal with a green diamond in its torso. A large orb (perhaps a sun) was sketched out to the right and flowers to the left.

“Is it a deer or an elk,” the two children asked.

A woman in a car drove slowly through the adjacent alleyway and commented: “That’s so beautiful. It’s going to be amazing, isn’t it? We’re so lucky.”

Reiss — who was high on a mechanical lift and wearing headphones — couldn’t hear the soft voices. She was in the creative zone and pushing to finish the mural on the west-facing side of the building at 380 Main St., where Batch is located, before First Friday. The official unveiling and a meet-and-greet with Reiss will be from 5:30 to 7 p.m. Friday at the park.

Later, Reiss would answer: “The animal is whatever the children want it to be.”

Reiss explained: “I wanted to look at things that were familiar to the area. There’s going to be a lot of flowers on it, too. It will have a lot of the wildflowers that you see around here. I decided that doing wildlife would be the most appropriate.”

She was among 35 international artists who submitted applications to paint a mural commissioned by Carbondale Arts. The nonprofit received a $20,000 grant from the Embrey Family Foundation, which was paired with $25,000 from the Marlene Miller Foundation in hopes of supporting two or three murals. Carbondale Arts formed a committee to review applications, which came from as far as Turin, Italy.

“We looked through all the applications and Bunnie’s just really seemed to fit what we were looking for,” Kimberly said. “It’s colorful and whimsical, yet it has the mule deer, which is an animal from our area. It just had a lot of great elements that we loved.”

Reiss has a Master of Fine Arts in painting from San Francisco Arts Institute. Her brightly colored folk murals are influenced by her Eastern European background. In addition to large public paintings, she does work for gallery shows and installations, and her work can be found throughout the world, including Los Angeles, Mexico, Italy, Paris, India, Philippines, Detroit, Milwaukee, New York and San Francisco.

Reiss, who grew up in Denver but now lives in the Korea Town district of Los Angeles, had been to Carbondale before and looked forward to returning for what would be a busy week. She sat in the Carbondale Arts offices for a short lunch break after working for roughly six hours straight, donning a “Stranger Things” baseball cap, a hoody with custom quilt work on the back, and canvas utility work pants that were covered in paint, likely from previous works of art. (The Carbondale mural is in spray paint, so it’s less messy in terms of paint dripping on her clothes but requires a face mask while working.)

To start the mural, Reiss projected a sketch of her painting onto the two-story-tall wall and roughed in the design elements. Because the mural originally was going to be on a different wall (the historical building that houses the Near New Store at Third and Main), neither Reiss nor Kimberly knew the exact dimensions. Reiss was able to adjust the mural to fit the new “canvas,” which was prepped at no cost by Dru Handy Custom Painting.

Batch and Roaring Fork Beer Co. owner Aly Sanguily, who lives on the second floor of the building, said she and her family have welcomed the mural.

“It adds value to our business, and we had a hideous orange color on the wall anyways,” Sanguily said. “Plus, I have a little 6-year-old, and she is so excited about it. We love the design.”

Kimberly said Reiss’ mural is the first large-scale work commissioned by Carbondale Arts. The organization helped fund the Chris Erickson mural on the SAW (Studio for Arts + Works) building, and more large-scale works are being planned, including a community mural on the CenturyLink building, installation of a kindness-themed painting by Carbondale seventh-graders, and a mural by Greeley artist Armando Silva.