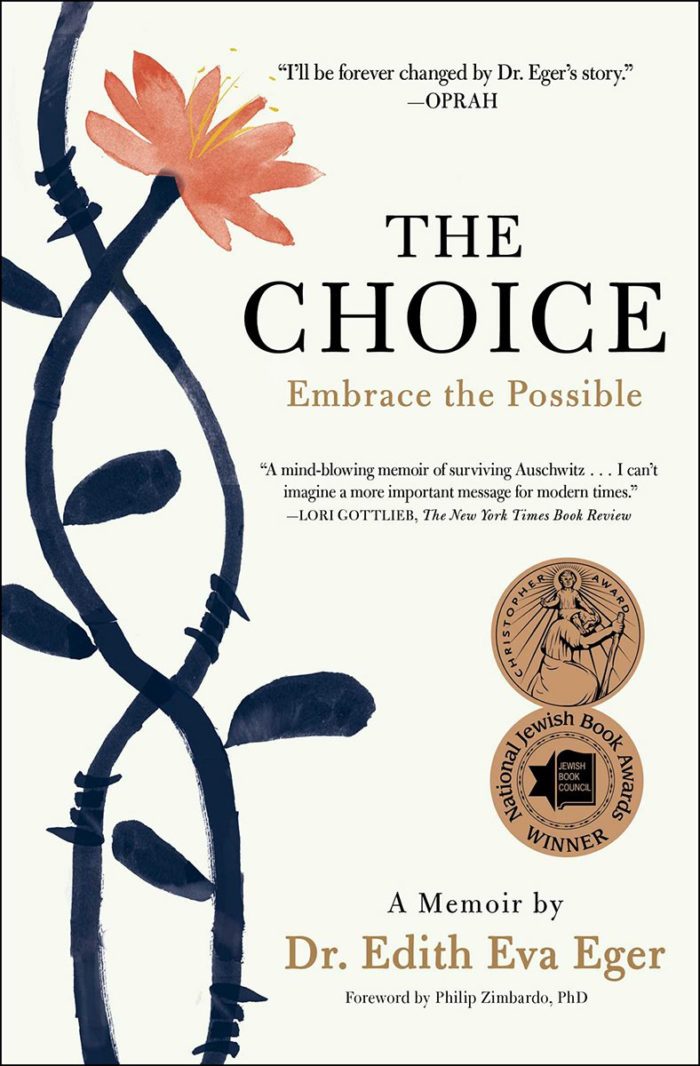 What can you learn from Holocast survivor and clinical psychologist Edith Eva Eger, Ph.D.?

You can hear her talk about her memoir “The Choice: Embrace the Possible” 7 p.m., Wednesday, Oct.10, at the Colorado Mountain College (CMC) Spring Valley campus. The presentation is free, open to the public and will be live streamed.

Her book encourages people to “tap their full potential and shape their very best destinies.” It was a New York Times best seller and won both the 2017 National Jewish Book Award and 2018 Christopher Award. As the 2019 Common Reader selection at CMC, it is available at local libraries and bookstores and at bit.ly/2OVjh8A online.

The 92-year-old author survived the Auschwitz, Poland concentration camp where the Nazis sent her and her family from their home in Hungary. Her parents were murdered immediately upon arrival. Her sister Magda also survived. Approximately one million people died or were killed there during the years from (1941 to 1945) the camp was operating.

When the camp was finally liberated, she was pulled from a pile of bodies, barely alive.

Asked how she was able to survive Auschwitz, Eger explained, “I said to myself, ‘If I survive today, then tomorrow, I’ll be free.’ So I never really allowed the Nazis, ever, to break my spirit. They beat me, they tortured me, and they could have thrown me in a gas chamber in a minute. But I never allowed them to break my spirit.”

Eger remember the last words her mother spoke; “Just remember, no one can take away from what you’ve put in your mind.”

After the war, she moved to Czechoslovakia, where she met her future husband. In 1949, they moved to the United States. In 1969 she received her degree in psychology from the University of Texas, El Paso. She then pursued her doctoral internship at the William Beaumont Army Medical Center, Fort Bliss, TX.

That stuck with her until today. She maintains a clinical practice in La Jolla, Calif. and holds a faculty appointment at the University of California, San Diego. She urges people to discard their limitations, discover their powers of self-renewal and achieve things they previously thought unattainable.

Eger recently noted, ”I’ve discovered that the process of seeing your challenges as assets, your past as a guide and your future as an opportunity.

She has appeared on numerous television programs including CNN and the Oprah Winfrey Show and was the primary subject of a holocaust documentary on Dutch National Television.

Throughout her life and her psychology practice, Eger described finding that her experience living through the horrors of war inspired her to help others deal with trauma and loss. She believes people, despite dire circumstances, have a choice to forgive and to heal.

Additionally, Eger and her team are working on bringing her story to the movies.

Under the CMC Common Reader program, the college’s students, faculty and staff vote on a book to read together. The public is encouraged to participate and attend authors’ presentations.

The talk will be live streamed at the Carbondale Branch Library. Also, you can watch the event from your computer, tablet or smartphone. Go to coloradomtn.edu/community-partnerships/common-reader just before the event and select the “Live Stream the Talk” icon on the lower left side of the page.

The United States Holocaust Memorial Museum on the National Mall, Washington, D.C. estimates no more than 150,000 survivors remain alive in 2019. That number is diminishing as age and time take their toll.

This may be one of the few remaining public occasions where you can hear survivors’ stories. Never forget.