Learning to answer the call 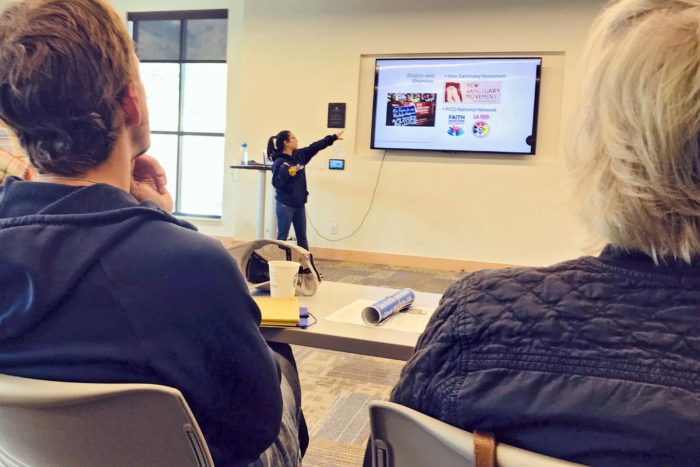 What could you do if several vehicles parked at your neighbor’s home were from Immigration and Customs Enforcement (ICE), United States Department of Homeland Security?

If you’re not sure and would like to know more, consider contacting the Colorado Rapid Response Network (CORRN), a network of concerned and committed groups and volunteers who respond to ICE activities in their communities.

Recently, CORRN held a training session in Glenwood Springs for prospective volunteers led by Ana Rodriguez, community organizer, Colorado People’s Alliance. It covered the basic history of the network, what it does/does not do and how it functions.

According to Rodriguez, “We want to document and confirm what’s going on. People need to know what to do and avoid doing more harm than good.”

Rodriguez described the different volunteer opportunities: caller, who observes a potential ICE situation and calls the CORRN Hotline; dispatcher, who alerts the next level of volunteers; confirmer, who goes to the site, and legal observer, an independent witness officially certified by the National Lawyers Guild. If ICE activity id confirmed, the dispatcher activates the onsite action and legal teams to provide guidance.

She noted the legal team is not part of the network, but is instead comprised of “attorneys who want to help.”

Dorothea Farris, member of the Sanctuary Committee, Two Rivers Unitarian Universalist (TRUU) fellowship in Carbondale said, “I am furious at what is happening. We cannot tolerate the behavior of the government.”

Plus, she emphasized that participation in these efforts “is a great way to get involved to protect people from deportation.”

Sophia Clark, a CORRN volunteer confirmed who attended the training, said, “Volunteering is a really concrete way to get accurate information and to confirm police and ICE activity.”

She added, “We appreciate a local team to witness situations.” Clark also confirmed that ICE apprehended 33 persons out of the 1000 recently targeted.

Jordan Garcia, immigrant organizing director, American Friends Service Committee (AFSC) in Colorado, said the committee is reaching out to people who want to get involved, “We need citizens to help.”

The American Friends Service Committee is a Quaker organization that “promotes lasting peace with justice as a practical expression of faith in action.

According to ICE, as reported on the American Immigration Lawyers Association (AILA) website, ICE deportation officers with its Enforcement and Removal Operations (ERO) arrested 42 criminal aliens and immigration violators in Colorado and Wyoming during a five-day enforcement action, which ended Sept. 25. Most of the aliens targeted by ERO deportation officers during this enforcement action had prior criminal histories; nine have pending criminal charges only.

An additional workshop is set for 2:45 p.m. to 6 p.m., Saturday, Oct. 19, in the Grand Ballroom of the DoubleTree hotel, Grand Junction (743 Horizon Dr, Grand Junction). The event is sponsored by Colorado Immigrant Rights Coalition (CIRC) For more details: https://www.facebook.com/CORapidResponseNetwork/

Earlier this year, Gov. Jared Polis signed two immigration bills into law that were expected to “change the legal landscape for undocumented immigrants in Colorado.“ One requires the Department of Revenue to create 10 more offices to issue identification documents, such as driver’s licenses.

The other, House Bill 1124, clarifies that federal agents cannot use local jails to hold suspected undocumented residents longer than their local sentence requires.

It also prohibits a probation officer or probation department employee from providing an individual’s personal information to federal immigration authorities.

As Farris mused, “We are all immigrants.”