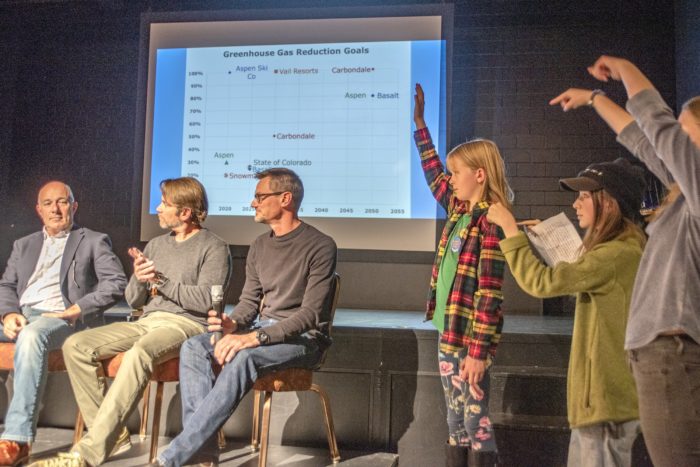 The positive momentum from the Global Climate Strike in Carbondale continued at the Beyond the Strike climate change forum held on Oct. 23 at the Third Street Center.

In September, residents of the valley gathered to join nearly 7.6 million people in an international, youth-led climate strike demanding a call for for a “complete phase-out of fossil fuels, the end of burning and deforestation in the Amazon rainforest and Indonesia, and the immediate transition towards just and equitable 100 percent renewable energy.”

At Beyond the Strike, students from Roaring Fork High School, Basalt Middle School, Colorado Rocky Mountain School, and  the Waldorf School spoke about their goals for climate action and how they hope to gain valuable knowledge from the greater community to attain their goals.

“Our goal is to make Roaring Fork High School 100 percent renewable,” Roaring Fork Energy Club member Ruthie Brown stated. “We are asking [the community] for any advice about how to do this!”

The forum’s hosts, Clean Energy Economy for the Region (CLEER) and Community Office for Resource Efficiency (CORE), heeded the requests of the students by bringing in a panel of experts from around the valley to discuss what their companies or districts are currently doing to combat climate change, and how they intend to move forward.

“We are taking the level of concern from students very seriously,” Alice Laird, Executive Director of CLEER explained. “Kids are really concerned about the future. Something has triggered an increased level of concern. We needed to do a follow-up on the strike […and show that] Carbondale has a plan and things are happening.”

Holy Cross Energy (HCE) in particular has set “ambitious goals” that will reduce their carbon footprint by 2021; a timeline nearly nine years sooner than previously anticipated.

“In the past six months we have signed two different power agreements that are causing a 50 megawatt solar array to be built outside of Denver and a 100 megawatt wind farm to be built over in Eastern Colorado,” she continued. “That will put us over 70 percent.”

Carbondale Town Trustee and RFTA board member Ben Bohmfalk discussed the future of RFTA, and how they hope to have a positive impact on the climate.

“I know for the young people in the room you want us to be more aggressive, you want it to be all electric tomorrow! And we want to get there, too,” Bohmfalk noted as the students in the room emphatically shouted support for a more aggressive plan. “But RFTA is still testing out these [electric] buses. They’ve never been driven in a high-altitude environment like this, they’ve never been driven on long-haul routes before. So we’re taking some risks and making significant investments.”

When it was time for the students to put the panel in the “hot seat”, there was no holding back.

Following this urgent mindset, a steady stream of questions such as why some trustees voted against a plastic-ban, why is there a fee for putting your bike on the bus, and why has it taken so long to get climate action in motion, flowed from the students.

Aspen Mayor Torre stepped in for the latter question.

“I want to point something out here: when we set these goals that doesn’t mean we’re going to slow down for those targets so we don’t achieve them,” Torre noted. “It’s going to take all of us on all levels… Great things can happen.”

Isla Brumby-Nelson, a 13-year-old student at the Waldorf School and member of the Youth Water Leaders Project team (YWLP), recognized the significance of community engagement to propel climate action.

“I think that our healthy rivers and healthy waters are very important.” Brumby-Nelson noted. “We have to start on a small scale to be able to move it on a larger scale, and [joining the YWLP] was a way I can be apart of that.”

“It’s really incredible that everyone came out here.” Brumby-Nelson expressed. “It’s not just people who have businesses […] it’s everyday citizens who care about these things. [For the future, I hope to see] everything that is happening already move at a quicker pace.”