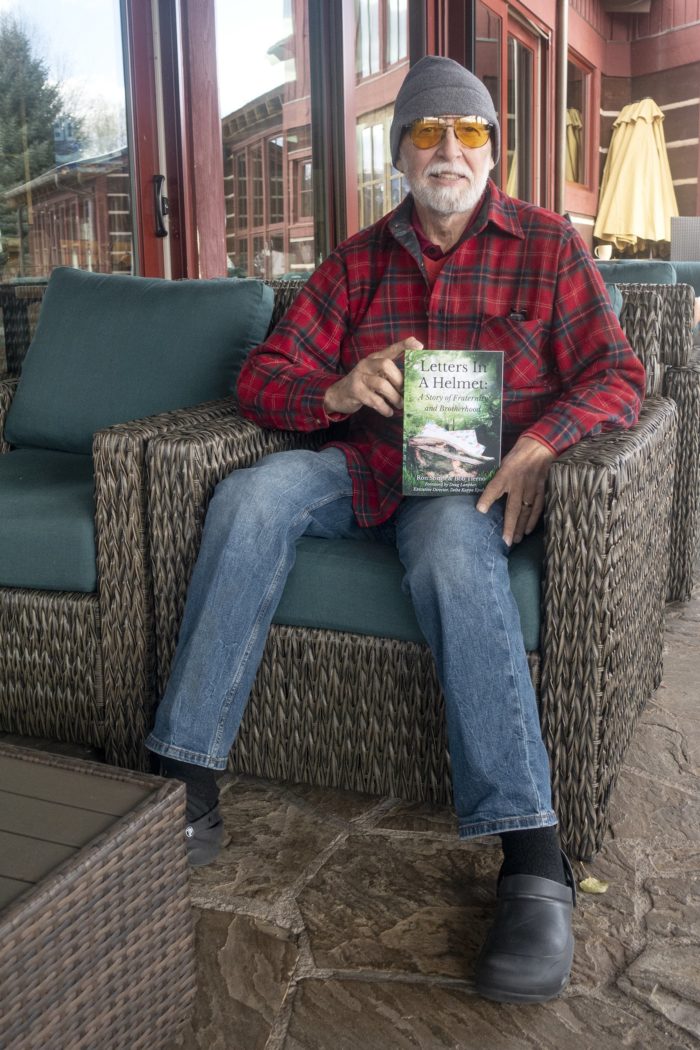 As a Vietnam veteran who lost his leg in combat and still has shrapnel in his body, Infantry Captain Ron Sorter, knows about pain — emotional as well as physical. He’s suffered both.

Veterans Day, Nov. 11, has always been a somber yet special day for him. And what will Sorter do?

“I’ve visited a lot of veterans cemeteries and those with a veterans section,” he said, “And I plan to visit another this year.”

Sorter and the love of his life, Michelle, lived in Redstone for 22 years and were project directors for the effort to restore the coke ovens. Sorter was also involved with the Crystal River Caucus and served as president of the Redstone Historical Society.

They left in 2015 following Michelle’s cancer diagnosis to be closer to family in Sequim, WA. She died in March 2019, 25 years into their marriage. Most every list of stress factors places the loss of a spouse as the number one most traumatic events a person can experience in their entire lives.

Despite his overwhelming grief, Sorter reached out to his college fraternity brother Bob Tierno who also served in the military during Vietnam. Each has since been living a full, happy life but with trauma along the way.

Sorter and Tierno realized they each had tales to tell about their long friendship. While Sorter was dealing with his grief, Tierno had just beaten prostate cancer. They always kept in touch.

Titled “Letters in a Helmet, A Story of  Fraternity and Brotherhood,” the nonfiction work harkened back to their war experiences, when soldiers would place their outgoing letters in an army helmet. Now available at Amazon.com online, it was published in October 2019.

Aptly, the book begins with a thoughtful poem by Albert Camus, winner of the 1957 Nobel Prize for Literature.

Sorter and Tierno met as fraternity brothers at the University of Oklahoma. “We bonded immediately,” Sorter remembered.

War changed them both, Sorter emphasized “We should find a better way to settle our differences. Sometimes it seems easier to hit someone than to chat.”

“Our lives have intersected often throughout the years.” Sorter said. A fraternity reunion in April 2019 brought them together again.

“Letters in a Helmet” is a sweeping tale spanning five decades. Sorter and Tierno travelled across a landscape of military service, career transitions, marriages, war wounds, cancer battles and sadness.

Sorter left Vietnam in 1970. June 2020 will be the 50th anniversary of his departure, he noted. He received the Combat Infantry Badge and the Bronze Star Medal. But, Sorter didn’t end his service to the military then. He became chief of prosthetic services at the Veteran’s Administration Medical Center in San Diego.

Later, he went to San Diego State University where he earned a Master of Science in Business Administration(MSBA), a degree specializing in artificial intelligence and robotics used in business and manufacturing. Then, Sorter was hired by a private firm in San Diego as Director of Prosthetics.

“All of us who were injured in combat were members of the involuntary brotherhood of the purple heart,” Sorter recalled.

“Letters in a Helmet” presents narrations switching back and forth between Sorter and Tierno. It’s written in the first person style (“I” instead of “he”); this allowed the writers to tell their own personal stories.

“That made the book is more personal,” Sorter explained.

Their editor and writing coach Jon Obermeyer commented on the book, “The immaturity of their youthful antics is followed immediately by the accelerated maturity of early adulthood, and later on, the accumulation of wisdom as they enter their eighth decade of life. This is an inspiring chronicle of American life bridging the 20th and 21st centuries with this enduring mantra: Your brothers are always there for you.”

Co-author Bob Tierno lives in Denton,Texas with Karen, his wife of 46 years. He expressed his thoughts about the publication, “It’s a story about a couple guys who, like me, lived their lives with their loves, their families and their losses. As an ex-military guy, I loved the title. If you, like me, don’t read a lot of books, you’ve got to read this one.”

Sorter is not quite finished with writing, as he has mulled over a new work about his late wife. He plans to call this new one “Dear Michelle.” Publication date is uncertain, but his heart is truly in it.