Art career after the video store 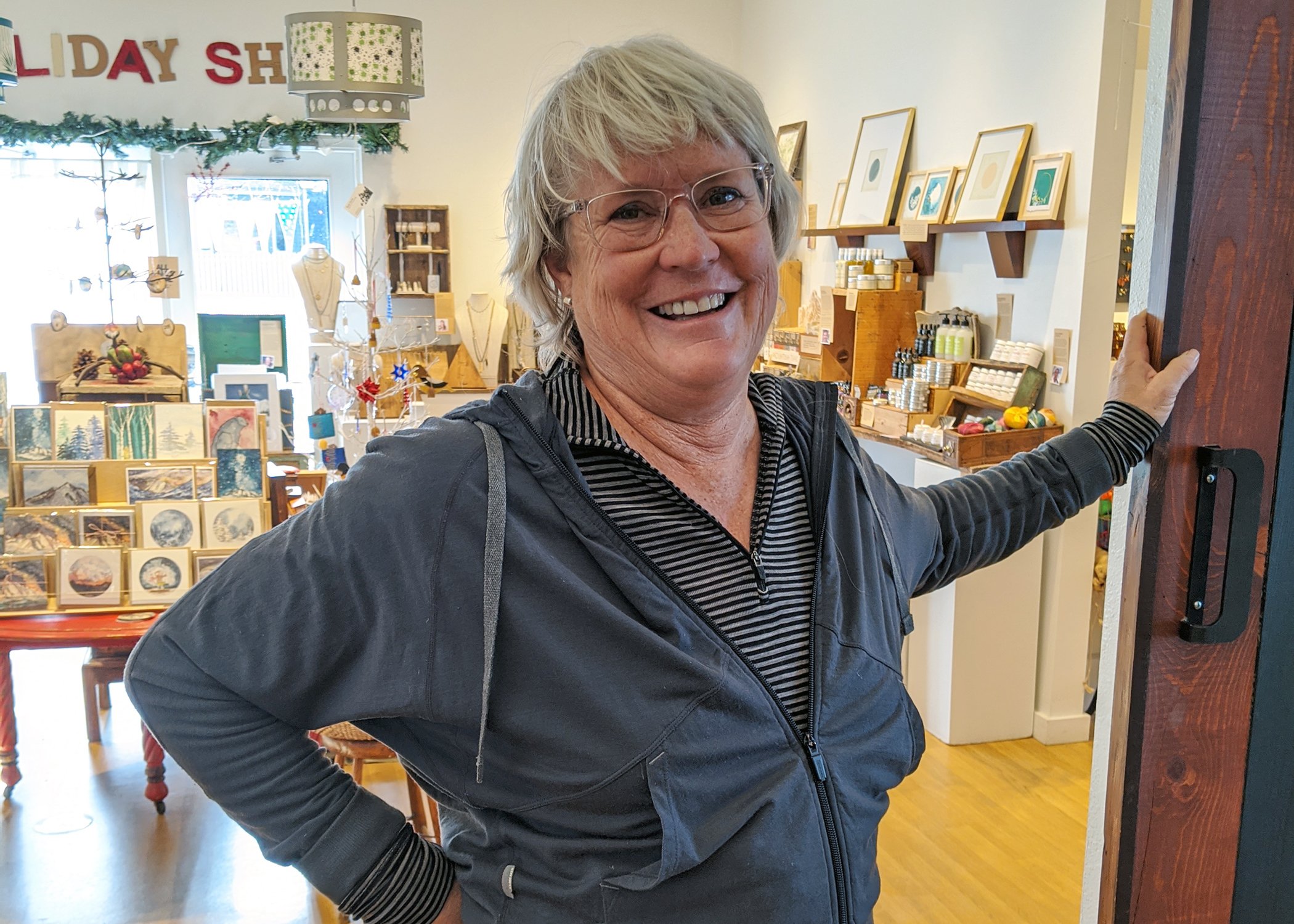 Staci Dickerson is having her first solo art show this month and next. She readily admits that it’s a big deal for her.

For longtime Carbondale residents, her name might more immediately conjure up fond memories of the popular video rental shop that she ran here for more than a quarter century. More recent arrivals may be better acquainted with her from Carbondale Arts at the Launchpad, where she has been on staff for more than four years.

Those who know Dickerson well, though, are very familiar with what she describes as her decades-long “curiosity, interest and passion” for art.

Regardless of how folks are connected to her, all agree that for the four-plus decades she has lived in the Valley she has been a tremendous asset to our community – be it the support she gave for fundraisers at schools, churches and other organizations when she had the shop or the warm way that she greeted people coming to this year’s Deck the Walls event at the Launchpad on a recent Saturday.

As one of her coworkers at Carbondale Arts put it, “Staci is very tuned in to what the word ‘community’ is all about, and she strives to make Carbondale a better place for all through her work there.”

When her video store closed in the spring of 2009, Dickerson told The Sopris Sun that her life had “come full circle” — and indeed it had. She had begun taking art classes at Colorado Mountain College campuses in the Valley in the late 1990s and soon was exhibiting in group shows around the area. By 2006 she had won the first of three People’s Choice awards at the annual Carbondale Arts Valley Visual Art Show (the other two were in 2012 and 2017).

Her store gone, Dickerson enrolled in Naropa University in Boulder in 2009 and completed a BFA in visual art there two years later. “I wanted to go back to school to develop my skills more … [it was] a journey to find my voice.”

That voice eventually took the form of Abstract Expressionism, the movement in painting that emerged in the late 1940s and ’50s in the United States, popularized by Willem de Kooning, Mark Rothko, Lee Krasner and others. She was drawn to the work of abstract artists such as Joan Miró and Agnes Martin, as well as of the West Coast painter Richard Diebencorn. “I was doing representational work for about 15 years as skill building and began doing abstract work the last couple of years,” she explained.

Her work has been exhibited in numerous group shows at several venues in the region, including the Aspen Chapel Gallery, the Red Brick Center for the Arts in Aspen and the R2 Gallery at the Launchpad. For many years she also has had pieces at the locals’ booth at Mountain Fair.

This fall, she was one of the area artists whose works have been on display at the Colorado State Capitol in Denver. That exhibit was made possible by her connections to the state-supported Carbondale Creative District and Colorado Creative Industries.

In August, much to her surprise, Dickerson was invited by Julia Bennett, the coordinator for the CMC ArtShare Gallery in Glenwood Springs, to mount her own show. Titled “Ocular Patterns,” it consists of 10 paintings, all but one of which were made after receiving the invitation. “I’ve been very busy,” she admitted.

Per a CMC press release, the paintings explore “the involuntary movements of the artist’s eyes as she creates her abstract paintings.” Dickerson further stated that she hopes people seeing her work will “thoughtfully experience and respond to the painting; to just notice what the eye notices … and to experience their own ‘ocular patterns.’”