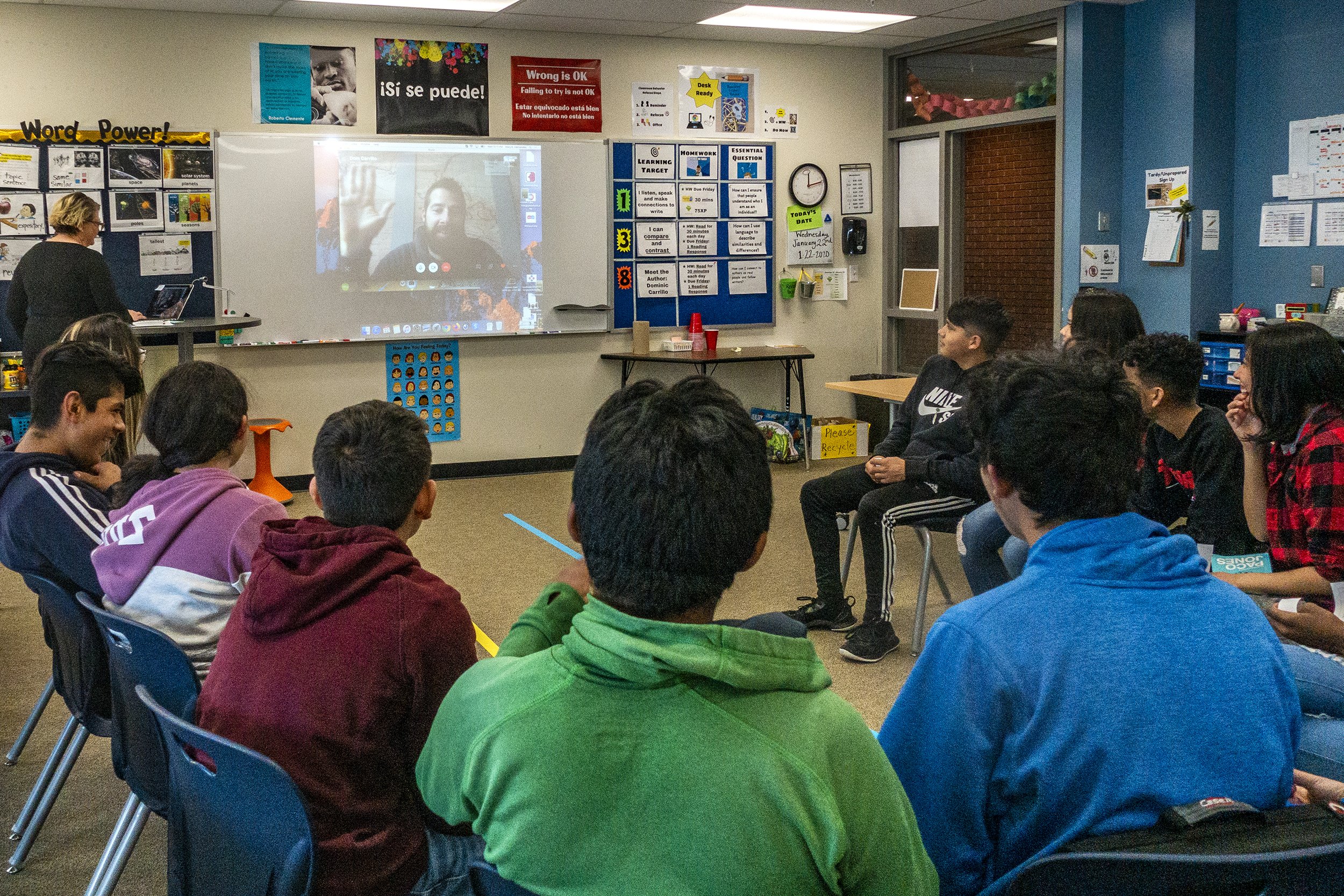 You read it. You loved it. And you and your 13 other classmates wrote letters to the writer, now teaching high school history at an Anglo-American School in Sofia, Bulgaria.

Unexpectedly, author Dominic Carillo wrote back a long and appreciative email. Fairly quickly, an interactive Skype (video chat) session between the author and the students was scheduled.

Mary Hernandez, their English Language Development (ELD) teacher at the Carbondale Middle School, coached the students on how to introduce themselves, ask questions and generally interact with Carrillo.

Fast forward to the highly anticipated class. Students sat in a tight semi circle facing a large screen. Hernandez reminded each of their roles one more time.

And there he was, live on the big screen.

After a pause, Carrillio said “Hello everyone.” And a big sigh softly spread through the room.

Carrillo told the kids, “Your letters were the best Christmas present.”

His smile became contagious as teacher and students grinned. “It makes my day to hear that eighth graders appreciated my story. Hopefully it led to interesting discussions.”

Each student introduced him or herself, going around the room. Then, each began asking carefully practiced questions,

“How long did it take you to write this book?” asked one boy. “Two years,” responded Carrillo. And he continued, “Writing for me is a long process. I write a draft, then put it away for a month before I go back to it.”

But, he noted, “The more books I write, the faster I become.”

Hernandez’ class is made up of emerging bilingual students. ELD’s role is to help develop their listening, speaking, reading and writing skills in English to successfully participate in academic studies taught in English, according to colorincolorado.org, a bilingual site for educators and families of English language learners. Carrillo’s young adult novel tells the story of teenage romantic angst. A poor, persecuted biracial eighth-grade boy falls for a popular girl in a posh school. The novel is described as “a fun, amusing tale about the beautiful torment of young hearts and hormones at play.”

“Just the fact that the teenagers read and thought about racism, identity, bullying, relationships and other topics make me happy beyond words because that was my primary goal in writing ‘Paco Jones,’” Carrillo remarked.

When Hernandez was asked why this book, she replied, “It’s engaging and culturally relevant,” adding that a colleague recommended the novel. Hernandez’ class continued with questions, such as “Are you going to write a new book?” to which Carrillo responded, “I am thinking about teenagers in World War II, and how Bulgarians saved many Jews from the Holocaust.”

Carrillo, who is half Mexican and half Anglo, said “Although this book has parallels to my life, it is not autobiographical. Instead, it was based on some of my experiences with race, identity and relationships as I grew up.”

Since the publication of “Paco Jones” — winner of the San Diego Book Award for best Young Adult  Fiction in 2017 — Dominic has focused on writing young adult novels with universal coming-of-age themes. He also released “The Unusual Suspects”  — an Independent Author Network Book Award Finalist in 2018 — was recently translated into Bulgarian.

He replied, “In 2012, I was teaching a class. A boy was very interested in one girl. The boy reminded me of myself in eighth grade.”

“There’s gossip in schools that is not true, but can become quite damaging to the person being targeted,” he mused.

Carrillo emphasized the importance of reading, “I can learn so much by reading  books on my own,” and encouraged the students to make reading a daily habit, regardless of the subject they choose.

After the session he said, “The students all had questions prepared and were attentive, listening in a way that is uncommon among teenagers today.” He added that it was clear Mary has had a great positive impact on her students, fostering a love of learning they will carry beyond the classroom.”

Several of the students had the same question: “Are you going to write another book about Paco?”

He responded that he needed to  imagine a sequel that feels like a natural continuation rather than something forced. Carrillo smiled and then challenged the group, “Perhaps, but will you help me write an outline?”