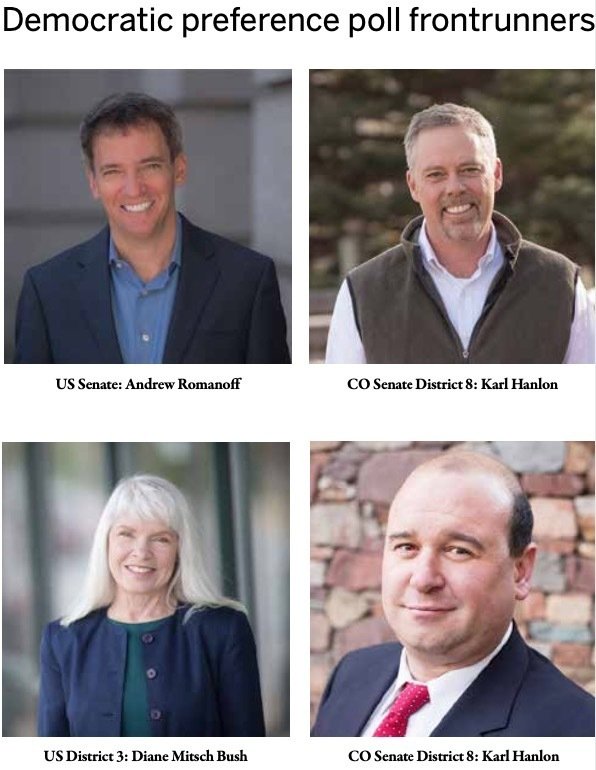 The Garfield County Republican and Democratic assemblies convened on March 20. Both of the assemblies were conducted via Zoom, a visual conference call tool utilized significantly throughout the professional world as of late.

On March 16, Governor Polis signed a bill enabling assemblies to meet remotely due to public health concerns. As previously stated, both parties in Garfield County honored the order.

Garfield County Democratic Chair John Krousouloudis enjoyed the experience over Zoom and believes it could be utilized in years to come. Krousouloudis stated, “This is a great tool for us for the future because it actually increases participation.”

Eighty four of 100 delegates participated in the Democratic Party Assembly. They certified their new PCPs (Precinct Committee Persons), conducted preference polls and “formally voted for Katrina Byars to be on the June primary ballot as the Democratic Party Candidate for Commissioner District 2.” Of the Garfield County delegates, 34 are permitted to participate in each race at the next multi county and state assemblies.

Romanoff’s priorities, among others, include healthcare for all and addressing climate change. He previously served as the Speaker of the Colorado House of Representatives. Romanoff began his career at the Southern Poverty Law Center fighting against civil injustices.

Mitsch Bush has been a resident of Routt County since 1976 and served as a  commissioner for six years. She was a member of the Colorado House until 2017. Mitsch Bush ran against Scott Tipton for the US 3rd Congressional District seat in 2018 and is back again to fight the battle. She aims to bring transparency between her constituents and congress.

Hanlon is a Carbondale local with a history of community service under his belt. He served as a park ranger for the Colorado Division of Parks and later completed training to become a post-certified peace officer in Colorado before going to law school. He has served as the city attorney for Glenwood Springs and specializes in water law. He hopes to address concerns including: climate change, water, “out of control” healthcare costs and housing affordability.

Wilhelm was born in Detroit but currently lives in Glenwood Springs. Some of his priorities include lowering health insurance costs, creating new jobs outside the oil and gas industry and expanding on renewable energy.

According to Carrie Couey, an organizer for Garfield County Republicans, they “did not conduct a preference poll in any of the races.” She further stated that US Senate and US District 3 preference polls will be conducted at higher regional assemblies. There were 107 participants during the assembly which was also held over Zoom. Couey further mentioned that they “ratified a vacancy committee and passed our resolutions.”

The higher level assemblies are all expected to take place virtually during the time of the coronavirus pandemic. It is entirely possible that it will become a trend beyond our current situation  as well.

Tensions are especially high this election year and members of both parties remain on the edge of their seats…so fasten your seatbelts.