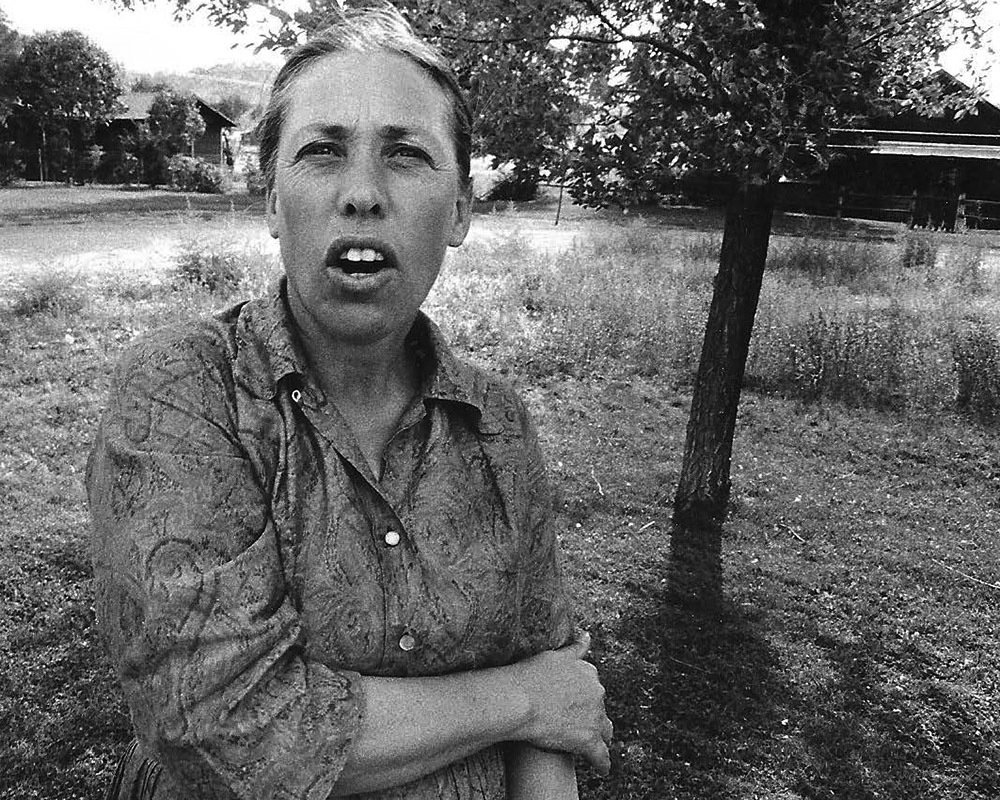 As for Tiny, she was a down-to-earth kind of saint with a raspy voice and salty sense of humor. She wore plain clothing such as a farmer’s wife might wear, and she pulled her hair up in a bun. Plain, simple, and shrewd; she could penetrate you in an instant. She had a raucous, ribald sense of the absurdity of the human condition. Sharing friendship with her stirred up a well of living water in my soul. She relished life deeply.  She had crinkly eyes.

When we landed in Carbondale in 1970, our hippy friends in Boulder wondered what had happened to us, so they hopped on a freight train and came over. Here they were, sitting on the front pew of the Pentecostal Holiness Church in Carbondale, drinking it all in. It was the custom in that church to pray loudly all at once; I don’t know if that startled our guests or not. Among them was  Bill Stephens, who later was gunned-down in his apartment in Boulder (maybe drugs, maybe politics?), and Harold Parker, who would become a hermit in Alaska (and later an elder in the Orthodox Church).

Once, Walt Smith and his jazz combo came to visit our church. They regaled us with a performance of “Little Bit,” a song they had recently composed. Then they tore into “When the Saints,” at which point we could no longer stay in our seats, but leaped up and began marching around the sanctuary, intoxicated with glee.

At one point in the early ‘70s, my wife and I and our two children had no place to live and precious little to eat. Tiny invited us to stay with her in the basement of the Pentecostal Holiness Church. I was waiting for my first paycheck from Black Gold insulation. I didn’t yet know enough to look for work in Aspen.

Memorably, Sister Tiny boiled a pot of turnips for me. They were mighty good. Her secret was to add sugar into the boiling water. She told us stories of her flapper days in the Roaring Twenties. She could still do the Charleston and the routine with the crazy knees. That would slap a grin on her face.

We got to the point where there was no food left in Tiny’s kitchen. She flung the cupboard doors open and began to pray demonstratively, “Lord, my barn is bare!” I went down to Larry’s L’il Super on Main Street (where the Frame Shop is now) and told Larry Mullins the situation. “We can’t have that,” said Larry. He hustled around the store and filled two sacks to the brim with groceries. “No charge,” he said.

Tiny’s social circle included such notables as Mabel West, Gracie Cowan, Jewel Thompson, Martha Wichey, and Elda Darien. They would swap cares, concerns, and observations about the day. Mabel’s son was a lokie driver at the coal mine. Jewel told us once that she had a “ministry of worry.” Gracie, who lived on the north edge of town, let a friend of mine, Tim Willett, live in a bus on her property. Later, Henry Amistadi had a bus there. The entire thing was a musical instrument from the front to the back of the bus. Bells, chimes, and what-all, in her placid cow pasture.

Tiny and my wife liked to joke about obtaining their clothes from the thrift store. Some may wear fancy dresses from Macy’s.  “But I,” drawled Tiny with an air of superiority, “get mine at the Near New.”

Dorene and I invited Tiny to go on a jaunt with us down to the Black Canyon. Sure, she’d go. She hopped in the car and off we went, enjoying good fellowship all the way down, laughing, praying, swapping stories. We had no provision for an overnight. At the canyon rim we decided to spend the night in the car, so we just sat there and fell asleep, Dorene and I in the front seat, and Tiny, longsuffering Tiny, in the back. In the morning we got up, stretched, and drove home.